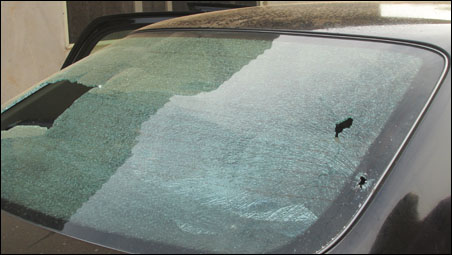 On the evening of the day the Democratic Socialist Movement (DSM) held its first Lagos aggregate meeting of the year, a malicious attack was carried out on Segun Sango at his residence at Ajasa Command area of Lagos State.

He had just returned from the meeting which had a sizeable turnout of members and supporters of the DSM in Lagos State. At the meeting, Segun Sango in his characteristic manner argued for the next steps in building a working peoples’ political alternative to dislodge and replace the PDP and APC bandits whose neo-liberal and anti-poor policies have put the working masses in the pathetic state of mass poverty amidst plenty.

Later, just around 6:30pm to 7:00pm, he and members of his family indoors heard a shattering sound like projectiles being thrown into the compound. The first clattered against the protective railings in front of the entrance of the house. Some minutes later, they heard another sound. When they were able to venture outside, they found the rear windscreen of their Toyota Camry car shattered. It was evident that the car was deliberately targeted. The object that struck the screen must have been projected from a close distance with a ferocious force to have such damage it inflicted.

While we have no concrete evidence that this was a politically motivated attack or just the handiwork of those the misrule of capitalism has made criminals, this attack cannot be taken for granted. Segun Sango is the General Secretary of the DSM (CWI-Nigeria) and the National Chairperson of the Socialist Party of Nigeria (SPN) which is currently striving to get registered with the Independent National Electoral Commission (INEC) in order to begin to mobilise the working and poor masses to challenge for political power starting from the 2015 general elections. 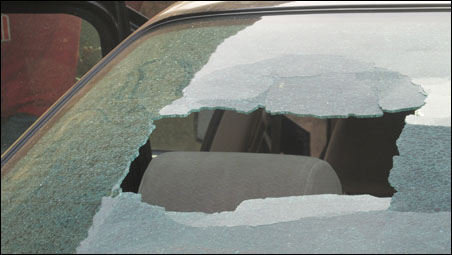 The matter has since been formally reported to the Meiran Police station in Lagos. Given the debilitated condition of the station and the response of the police officers to the report it is clear that the police are helpless. They asked Segun Sango what did he want the police to do on the case and who did he suspect. They would not have minded if Sango had wanted to hire them at a right price to unleash terror on his neighbours. He told the police he did not suspect anybody but had only come to formally report the incident.

The helplessness of police in fighting crime is a product of the failure of capitalist government. The police are ill-equipped and poorly remunerated, and therefore have the tendency to trying to make fortune out of misfortune of ordinary people.

Today the defense of individuals and communities from attacks by political gangsters, criminals, religious sectarians or the security forces lies in the hands of working people themselves. But such necessary defense can only be the first step – Nigeria urgently requires a complete transformation, a revolution. To achieve this working and poor masses must to take political power from the capitalist bandits and begin to reorganize society along socialist lines through public ownership of the commanding heights of the economy and their democratic management. This requires the building of a political party of the working and poor masses. The DSM will remain committed and unflinching to this task.

For the DSM National Executive Committee