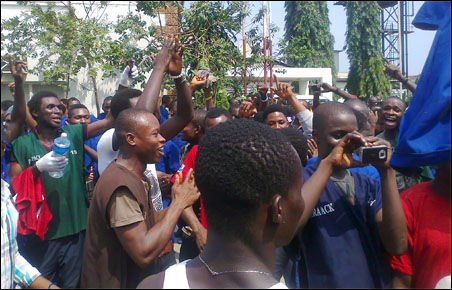 Since October 11, the workers of Dura Pack, Lagos, have been on indefinite strike over their demands for unionisation and improved working conditions. The action actually started on October 7 when the protest of workers and pro-labour activists marking the International Decent Work Day picketed the factory to launch a trade union branch of the National Union of Chemical, Footwear and Non-Metallic Workers (NUCFRLANMPE), see: http://www.socialistnigeria.org/?p=2273. The workers who had been working in slave-like conditions and on poor pay, felt liberated and emboldened to formally join the union which had been trying to organize the workers in 2009. In the presence of the Chinese management of the company and a mass contingent of workers and pro-labour activists led by Issa Aremu, the NLC National Vice President, the workers elected a 7-man executive.

The workers however went on strike on October 8 after the management refused to recognize and the executive and their right to join the union. With the intervention of the Ministry of Labour which called a tripartite meeting of the ministry, management and union over the issues for October 10, the strike was suspended on October 9. It is instructive to state that the workers insisted that the Campaign for Democratic and Workers’ Rights (CDWR) which has been identifying and helping organise them since April 2013 should be represented at the meeting.

The workers resumed their strike on October 11 after learning that the management did not attend the October 10 meeting at the Ministry of Labour. Since then they have remained on strike with a daily protest rally as the management refused to meet their demands. When the management eventually appeared at another meeting at the ministry on October 17, they remained intransigent and refused to shift any ground, stating that they would not recognize the union based on the last picketing, which they termed an ‘invasion”. The union even offered that the workers could suspend the strike if the management signed an agreement that no worker would be victimized as a result of the strike, and proposed another day within 7 days wherein the union would come to conduct another election. The management representatives refused and maintained that the management would not recognize the union because the picketing of the company by the NLC was unacceptable to them.

Dura Pack Industries is part of the Lee Group. Lee is a group of Chinese companies notorious for rabid anti-labour practices. It should be recalled that at the West Africa Rubber Factory (a member of the group) in 2002 about 30 workers on night duty were burnt to death in an inferno while hundreds sustained injuries. The practice then was that the Chinese management would lock the major entrances and go to bed. It became difficult to escape when the inferno started. No management staff was arrested let alone prosecuted. 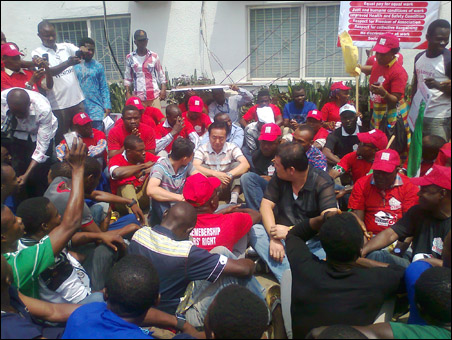 At Dura Pack, no worker since 2006 has been issued a letter of employment, which is a violation of the Labour Act which states that every worker must be given an employment letter if they worked at a company for more than 3 months. Workers have no condition of service, no identity card, no pay slip, cannot go on holiday and annual leave. The workers are wantonly and unlawfully fired without compensation or entitlement. Due to lack of safety work tools a worker, Mr. Kenneth Frederick, died of electrocution on 15th of April 2013. Workers salaries are determined arbitrarily as salaries are paid without a defined scale, which gives management the opportunity to shortchange workers. The salary hovers between N15,000 ($94) and N21,000 ($131) and workers have been agitating for increment in wage. These are parts of what workers are fighting against. Many employers, including Nigerians, violate the law and workers rights as the Ministry of Labour officials usually turn a blind eye having been compromised.

No doubt the Dura Pack workers enthusiastically signed up to join union in order to have a platform to fight for better condition of service, collective bargaining and better working conditions the workers have resolved to continue the strike as long as management is not ready to recognize the union they have joined.

Meanwhile, the management had repeatedly posted memos at the gate declaring the workers’ strike illegal, and that workers will be allowed to work if they sign a letter of undertaking. The workers resume at the gate every morning with a view of resuming work provided the management recognizes the right to unionization and agrees not to victimize any worker but management has remained recalcitrant. Technically, the management is also currently on strike.

Three CTV cameras are strategically positioned to watch the workers’ daily protest, yet workers are not intimidated. Rather, the workers are resolute and determined to continue the actions until management respects workers’ rights. The Chinese management has introduced this tactics to intimidate workers and to spot leading workers’ activists for possible victimisation. The management has also said that workers should come and collect their “Pay-off” while refusing to negotiate the pay-off with the union. The management wants to pay workers for the number of days worked in October and reemploy workers anew at a later time in order to continue the slave conditions. 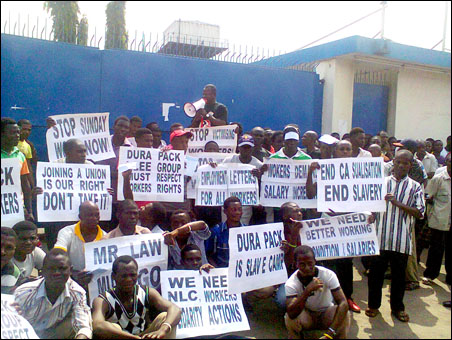 The CDWR has been pushing for the management to open factory for all workers to resume without loss of pay and that the union (NUCFRLANMPE) should deepen solidarity actions by mobilizing other workers in the West Africa Rubber Factory, a company also a part of the Lee Group, to embark on 24 hours solidarity strike action as a first step towards picketing other companies connected to Dura Pack. In the eventuality of closure of factory, CDWR calls on the government to take over the factory and to be run democratically by workers’ and government representatives. The union leaders currently prefer suing the management to court, which we welcome but it is shying away from more political and solidarity actions.

Last week management introduced a trick aimed at dividing the workers. It called on some workers whom it called casuals to collect their money and some of them came forward to collect about N4,000, which is for 7 days worked in October before the dispute broke out. In reality, all workers are casuals. The workers were only paid after signing management’s prepared letter of resignation, which is the tactics employed by the management anytime it wants to unlawfully sack any worker. On June 18, 2013, a worker, Mr. Orji, was asked to sign letter of resignation but declined and since been locked out without pay. The management notoriously forces workers to sign forms written in Chinese language, an act that makes it possible for workers not to be aware of what they are signing.

On Tuesday October 29, 2013, workers collectively took the initiative to enforce no entry, no exit. They blocked the gate from 5am till 10apm. The next day, the management called in the police and there were 50 armed police officers who came in 6 patrol vans to force workers off the gate. The management may introduce this force when it wants to start recruiting to begin production. Though, no worker was arrested.

By and large, Dura Pack workers have been agitating for the following: 1. Right to join a trade union, 2. Increment in salary, 3. Regularisation of workers employment to all workers and a new condition of service, 4. Well-structured salary scale including paying workers with pay slips, 4. Reinstatement of Mr. Christian Orji without loss of pay and end all forms of victimizations, 6. Adequate safety tools to be provided for all workers, 7. Right to annual, sick leave and holidays without loss of pay, 8. Well-equipped sick bay within the premises, 9. Reduction of work hours.

The CDWR, the pro-labour platform initiated by the Democratic Socialist Movement (DSM), calls on socialists, trade unions and activists locally and internationally to join the solidarity campaign with protest text messages, email and calls to the following.

Please also send copy of the protest e-mail to campaignworkers@yahoo.co.uk

A protest letter should be sent to the Dura Pack e-mail with copies to the Chinese Embassy and Ministry of Labour. E-mail and Text messages can be sent to the Ministry of Labour to call on it to force the management to respect the right of workers to join a trade union as stipulated by Nigerian labour laws and international labour standards. Another message should be sent to Commissioner of Police demanding an end the ongoing intimidation of striking workers.