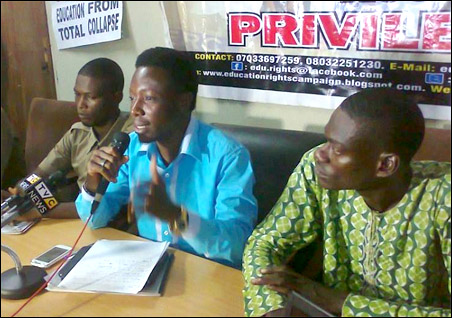 As the indefinite strikes of the Academic Staff Union of Universities (ASUU) and the Academic Staff Union of Polytechnics (ASUP) roars on, the Education Rights Campaign (ERC) held a media conference on Wednesday 30 October 2013 to drum up support for the on-going struggle to save public education and to demand the meeting of the striking union’s demands. This is part of the programme of the ERC to intensify activity in support of in the strikes. Last week, ERC members in Lagos held a lobby action which consisted of a solidarity march on the offices of the National Union of Petroleum and Natural Gas Workers (NUPENG) and the Nigeria Union of Teachers (NUT) to urge them to name a date for solidarity strikes in support of the struggles of education workers.

As the ERC pointed out at the lobby action, a one-day strike from any of these unions and preferably from the entire labour movement led by the two labour centres of the Nigeria Labour Congress (NLC) and the Trade Union Congress (TUC) can prove decisive in forcing the government to begin to soften its hard-line stance and seek out ways to honour the agreements it reached with ASUU and ASUP.

The press conference which held at the International Press Centre (IPC) located in Ogba Lagos State started around 10:30am with an introductory speech from Comrade Lateef Adams (ERC National Deputy Coordinator and a student of the University of Lagos). About twenty three press men and women (including Radio and Television correspondents) were present at this press briefing. Members of the ERC and other student activists were also present.

Afterwards, comrade H. T Soweto (ERC National Coordinator) read out the text of the address. The press text exposed the anti-poor orientation and profit-first mentality of the capitalist ruling elites in Nigeria â€“ a characteristic which has caused the closure of public schools for over 145 days in the education sector. The ERC emphasized in the text that Nigeria is stupendously rich to meet ASUU and ASUP’s demands by committing appropriate funds to the education sector; instead Nigeria’s resources are daily expended on corruption and lavish life-styles of political office holders. It is based on this that the ERC called on parents, students and labour unions to support the strike actions of ASUU and ASUP and organize mass actions to force government to meet the demands of the striking lecturers.

After the presentation, there were questions and reactions from members of the press. Many of the questions were quite interesting as they revealed the legitimate concerns of ordinary Nigerians. For instance someone asked ERC “to strike a balance”; another wanted to know “if the ERC is for or against the strike?” In reacting to these, Comrade Lateef Adams responded that “we in the ERC support the strike not because we love staying at home. We want the demands of ASUU and ASUP to be met for the sake good and quality education in Nigeria. It will not be good for students to resume at school after wasting several months at home only to discover that the same old conditions persist”. Comrade Wole Engels (ERC National Mobilization officer and a student of the Obafemi Awolowo University) while reacting to some of the questions said that “the interest of Nigerian students is our priority â€¦ we in the ERC believes that the interest of all Nigerian students is free, quality education. ASUU and ASUP are making such demands which if implemented will reflect significantly in the quality of education in the country.” 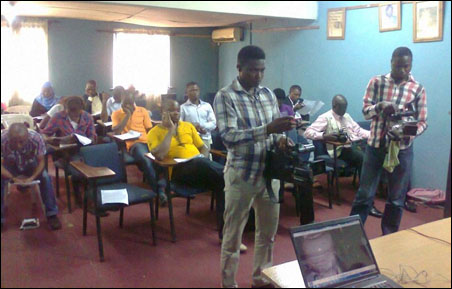 A cross section of journalists and ERC members, photo by DSM

Some of the media correspondents were interested to know ERC’s reaction to the anti-ASUU protests and propaganda being orchestrated by the national leadership of the National Association of Nigerian Students (NANS) led by Yinka Gbadebo. In reacting to this, comrade Wole Engels said that “we know that the student movement has some traditions. And part of it is real involvement of students in all decisions of NANS, but Yinka Gbadebo has never done that. He has never called a congress of students since this strike started. So he is definitely not articulating the position of Nigerian students on this strike; all he is voicing is his own opinion, not those of Nigerian students.”

Comrade Ogundele Michael (ERC National Secretary and a student of the University of Ibadan) in his own comment said that in order to create an avenue for ordinary students to have a say, the ERC is organizing a town hall meeting coming up on 13th of November 2013 to provide an avenue for Nigerian students, education workers, parents, the labour movement, civil society, social and community groups to jointly debate and come to an agreement on actions to take to end the crisis going on in the education sector. According to him, if Yinka Gbadebo and his executives are confident of their pro-government stance, they should also come to the townhall to articulate their positions.

Tope Adesipo, the Students’ Union President of the Federal University of Agriculture Abeokuta (FUNAAB), who was also present at the press conference, in his solidarity message, blamed the dilapidating state of the educational sector on the Federal Government. He also condemned the statement made by the Federal government that institutions should seek for internally generated revenue, which by implication means increment in fees and heightened burden on the already poverty-stricken parents. This is already manifesting in FUNAAB with the recent hike of acceptance fee from 25,000 to 45,000.

He also condemned the pro-government stance of the NANS president. He made a lot of revelations which drew the interest of the media. One of his revelations was about the anti-ASUU press conference the NANS president recently organized in Lagos. According to Tope, the event was originally meant to be a meeting called ostensibly to afford the NANS national leadership the opportunity to know the opinion of the South west student leadership. They were however surprised when the supposed meeting did not hold as scheduled and the student leaders many of whom had to sleep over at the hotel venue till the next day were surprised in the morning seeing TV crews and press men all over the place and Yinka Gbadebo addressing them and thereby creating the impression that the anti-ASUU propaganda he was spewing out were products of a meeting with the Southwest student leadership. This shows the undemocratic method of the NANS leadership and why a student congress is urgently needed.

H.T Soweto, in his sum up, said the Federal government strategy of arranging paid anti-ASUU protests will collapse like a pack of cards. He made references to such instances in Nigeria’s history when the ruling elite paid for rallies to create the impression their anti-masses policies were popular. One of such was the Youth Earnestly Ask for Abacha (YEAA) organized by the late military dictator Sanni Abacha. All these subterfuges notwithstanding, the genuine movement of the working masses eventually prevailed leading to the collapse of military dictatorship in Nigeria. The will of the ordinary masses of poor Nigerians will also prevail in this struggle to save public education. He maintained that the Nigerian government is only taking advantage of the poverty and destitution of some people by hiring poor Nigerians to protest against ASUU. He also publicly invited Yinka Gbadebo to come to the town hall meeting and tell the real Nigerian students why he is against the strike.

Soweto further responded to a question that says “If FG implements the ASUU and ASUP demands, does ERC think that this will automatically solve the educational crisis” In his response, “we cannot say it is automatic but we believe that the 2009 FG-ASUU agreement contains basic ingredients that if implemented can begin to revitalize decayed infrastructures of public universities. However as the ERC has repeatedly asserted, only the democratic control and management of schools by elected representatives of the student, parents and school management in decision making organs can begin to ensure that whatever increase in funding this strike is able to win translates into real improvement in the conditions of the education sector”.

He further blamed the backwardness of the country on the anti-poor policies of the capitalist ruling elite and that only their overthrow and replacement by a democratic workers government armed with socialist programs can save Nigeria. The conference ended enthusiastically with singing of various solidarity songs.