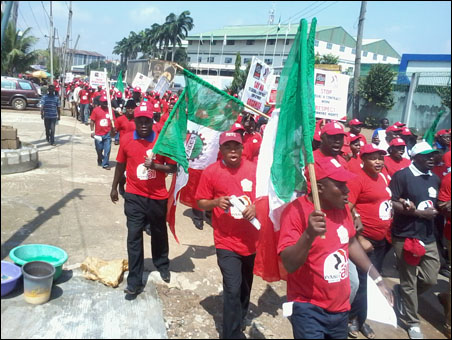 The Campaign for Democratic and Workers’ Rights (CDWR) and Joint Action Front (JAF) joined some trade unions in a mass Lagos rally on October 7 to campaign against casualisation, contract staffing and indecent work practices. The rally was an activity to mark the “Decent Work Day” as set aside by International Labour Organisation (ILO). This year event was tagged STOP PRECARIOUS WORK campaign. 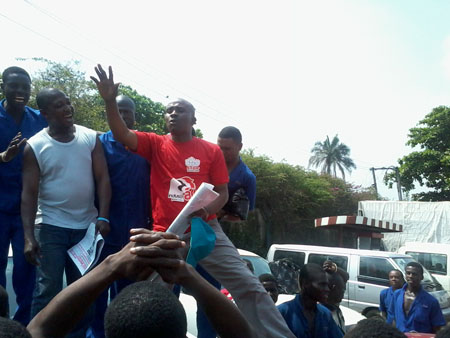 The protesting workers and pro-labour activists, numbering about 300, converged at the Textile Labour House, Ikeja, Lagos which was the take off point of the rally. Issa Aremu, General Secretary of NUTGTWN (Textile Union), who also doubles as a Vice President of the Nigeria Labour Congress (NLC), and Abiodun Aremu, the National Secretary (JAF), amongst others addressed the gathering on the importance of the campaign and imperative of decent work.

In his speech, Issa Aremu stated that all past leaders, including the military, had given Nigeria workers good labour laws unlike Lord Lugard and other colonial masters. Though he acknowledged the struggles led by Michael Imoudu, he did not mention that these “labour laws” were a product of the struggles of workers. He apparently ascribed the laws as gifts given to workers out of the government’s magnanimity. However mention was not made of the laws passed in recent years that undermine the gains of past struggles. For instance, the new Pension Act forces workers to contribute out of their meager wage for their pension while the private sector workers are meant to contribute more for their pension compared to previous laws. 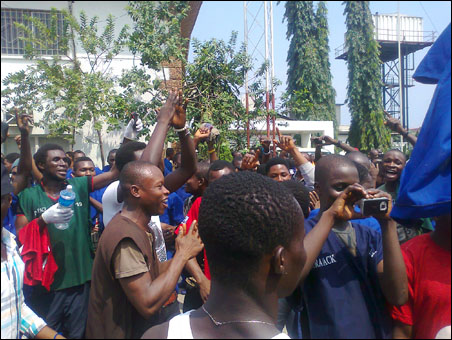 Shortly after taking off some workers of a manufacturing company that produces tissue paper, opposite the Textile Union House, were visibly begging the labour leaders and protesters to come and intervene in their company in order to stop anti-labour practices being carried out by the management. Unfortunately, the hapless workers had to wait or pray for another day as the company was not among those listed to be picketed by the organizers even though located within a shouting distance from where the plan of action was hatched.

The protesters stuck to the plan and moved along some major roads of Ikeja where there are some industrial estates and displayed banners and placards carrying slogans like; “stop precarious work, join the union”, “stop casual and contract work”, “respect workers rights”, “union membership workers right” and many more. 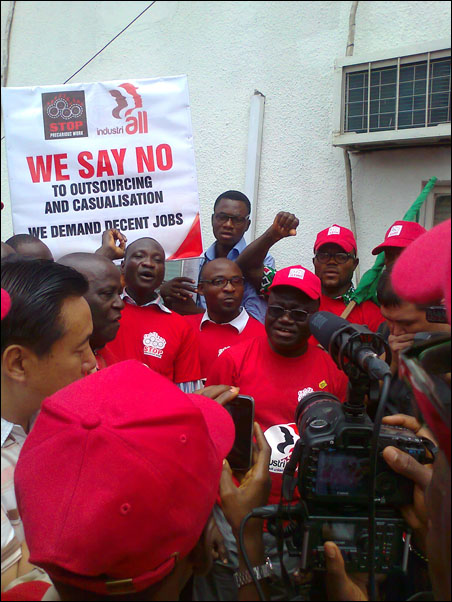 The highlight of the campaign was the picketing of two companies located off Oba Akran Road. The first was Majestic Sack- a sack manufacturing company at NIWIL Close. On arriving at Majestic Sack Ltd, the production factory was found locked while the finishing section was left opened for few workers to work. From interaction with the some workers present, there were revelations of terrible working conditions such as 12 hours work daily, N600 wage per day, no protective and safety materials etc. The management of this Indian-owned initially refused to show up for discussion. For some time, the textile union had attempted to unionize the workers but was stoutly resisted by the management. But at the point of picketing the management found the force of workers too overwhelming to resist and thereby signed an agreement to allow workers join the union, NUTGTWN.

The Majestic shares the same industrial yard with other companies such as Nigeria Wire, a subsidiary of Guinness Plc, etc where anti-labour practices appear to be a norm. At the Nigeria Wire there is a trade union, SEWUN, but the condition of workers are terribly precarious. Most of the workers, including old men, are casuals who earn N400 per day for 12 hours work. This is however shows that it is not enough simply to have a trade union, it needs one with a fighting leadership that exists for the interests and rights of workers to decent work and living wage. Unfortunately, many trade union leaderships are only interested to unionise a factory because of check-off dues or to use the plight of workers as bargaining chip with the management. This explains why CDWR campaigns for fighting and democratic trade unions where all officers are elected, subject to recall and live on the average salaries of workers they are elected to lead, and workers are truly involved in the running of the union’s affairs. 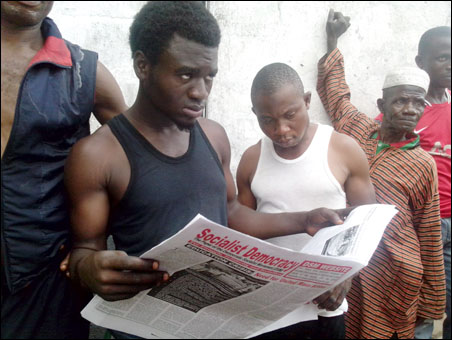 Workers with Socialist Democracy at Majestic, photo by DSM

The rally left Majestic for Dura Pack, a Chinese owned company which produces nylon and polythene bags. Incidentally, the CDWR has been intervening in Dura Pack since April 17 when a worker, Kenneth, was electrocuted as a result of lack of safety work tools and generally poor working condition. It was the report of the intervention of CDWR on the website that drew the attention of NUCFRLANMPE and their interest to unionise the factory.

When protestors led by Issa Aremu entered the premises of the company workers, who were highly elated seeing the labour leaders and activists, quickly joined the rally. Some Chinese management officials were invited to the picketing line for discussion after all efforts to get Mr. Law (Managing Director) proved abortive as a result of him having gone into hiding. With everybody, including trade union leaders, management staff and workers, seated on the floor the workers were asked if they wanted to join the union and all without exception voted in affirmation. Immediately a 7-man committee was elected by the workers to lead the workers. Right there, a draft agreement to respect the wish of workers to join union was signed by representative of the management and an official of NUCFRLANMPE.

The workers, who felt liberated, continued the rally after the campaign train of trade union and pro-labour activists had left the company. They indeed declared October 7 as Liberation Day. Mr. Christian Orji who was sacked on June 18 by the management because of the agitation for unionization and better welfare condition came to address the crowd. Comrade Chinedu Bosah, the Publicity Secretary of CDWR also addressed the workers and called on them to remain steadfast. 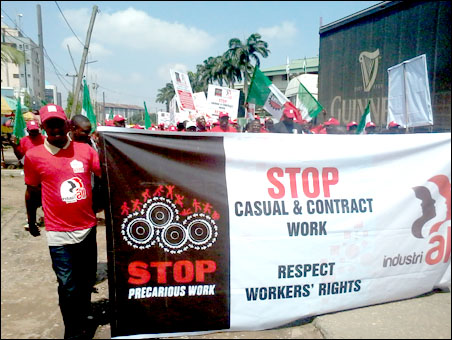 The protest March takes off, photo by DSM

The following day, October 8, 2013, Dura Pack workers embarked on a strike action. They gathered in the front of the company for a rally with various placards with messages highlighting their demands. Some of the placards read: “End Casualisation Now”, “Mr. Law must go”, “Respect all Workers Right”, “we want Union of our Choice” etc. The management invited armed police to intimidate the workers. But the striking workers stood their ground and demanded that management must first recognize the union and begin negotiation with union officials before returning to work. The union officials led by Mr. Dada and CDWR members intervened to proffer leadership to the strike. The management arrogantly refused to discuss with the union officials arguing that discussion could not begin until Monday October 14 when their lawyers would be available. The workers responded that the stance of management meant they would only return to work on October 14 when the negotiation begins. It took a long appeal and discussion before CDWR and NUCFRLANMPE officials were able to convince the workers to resume work the next day.

Two officials of the Ministry of Labour were present and held a meeting with the management where another meeting was scheduled for Thursday October 9 at the Ministry of Labour’s office. Workers insisted the union and CDWR should attend the meeting and come back to brief them on Friday, October 10. The management did not show up at the October 9 meeting, and upon being briefed of the recalcitrant attitude of the management by the union very early on Friday, the workers refused to go to work and resumed indefinite strike action. 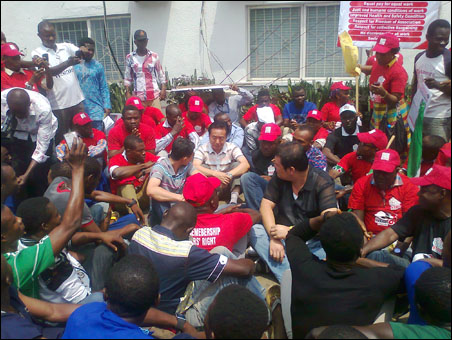 Dura Pack workers have been agitating for the following: 1. Increment in salary, 2. Regularisation of workers through issuance of letter of employment to all workers and agree with workers on a new condition of service, 3. Well structured and documentation of salary including paying workers with pay slips, 4. Reinstatement of Mr. Christian Orji without loss of pay and an end to all forms of victimization of workers, 5. Adequate safety tools to be provided for all workers, 6. All workers must have a right to proceed on annual and sick leave without loss of pay, 7. Well equipped sick bay within the premises, 8. Reduction of work hours and increase in salary.

CDWR calls on the trade unions to continue the picketing of all workplaces where anti-labor practices take place and not to abandon the campaign and struggle. However, CDWR calls for the setting up of anti-casualisation committee that will comprise of different trade unions as well as pro-labour organisations to work out strategies to consistently challenge not only casualisation but all forms of anti-labour practices.