From both a political and organisational point of view, the Congress of the Democratic Socialist Movement (DSM) held on Saturday 5 to Sunday 6 October 2013 was a great success. About 80 delegates and observers representing 17 branches attended the Congress. 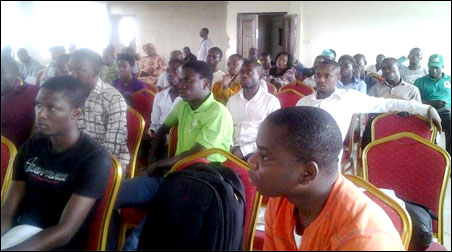 The Congress met against the background of continuing widespread popular questioning and fears about the future facing Nigeria’s rapidly growing population. As the meeting held, the ASUU strike was shaping up to be a possible spark of widespread solidarity actions that could produce another mighty movement against the Jonathan government itself. It was clear at the Congress that DSM members and supporters would step up the campaign that a day is set very soon for nationwide action to save education.

It was clear to all at the Congress that a new period is opening up. The DSM – an affiliate of the Committee for a Workers International (CWI) – held its founding congress in 1987. This is well over two decades ago during which time we have experienced both periods of success and setbacks in the building of the forces of Marxism. Spending its first decade and more under military despotism, the DSM has come a long way and has weathered a lot of storms. In a number of ways, the Congress presented a kind of balance sheet of the organization. More than half of the Congress was made up of young people showing the potential for us to sustain and grow. Some of these young people are already playing crucial roles in different areas of our work. Also there were many who were attending the Congress for the first time which shows that despite difficulties we have managed to keep recruiting.

The mood at the Congress was one of conviviality and enthusiasm. The student meeting held on Friday – the eve of the Congress – did not close until late in the evening. At the student meeting was discussed the current strikes in the education sector and the slogans and methods to build the struggle to victory. Same thing happened on the first day of the congress. Reason is that as a result of the long intervals between national meetings due to financial considerations, there was so much to discuss at once. Despite the backbreaking long hours of the meetings, substantial numbers actively participated in all congress proceedings till the end. 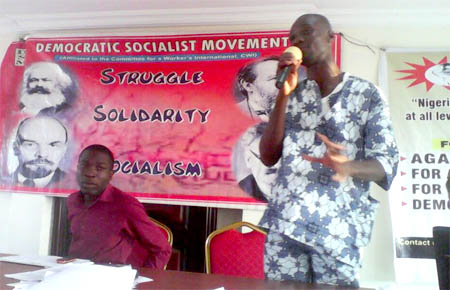 Highlight of the congress included discussions on Nigeria perspectives, world relations, building the Socialist Party of Nigeria (SPN), branch reports, election of a new National Executive Committee (NEC) and National Committee (NC) of the DSM. Several solidarity messages from sections of the CWI in Europe, Israel/Palestine and other parts of the world were read out to the Congress. Comrades found great encouragement in the messages of socialist brothers and sisters all over the world urging us to keep the banner aloft. This international solidarity was further cemented with the presence at the Congress of Robert Bechert from the International Secretariat of the CWI who introduced the discussion on events and developments around the world especially the intractable crisis of global capitalism, the struggle of the working class people and youths and perspective on socialist revolution. Also present at the Congress was Dalai from the newly developing CWI sympathizing group in Cote d’Ivoire.

Leading the discussion on Nigeria perspective, Segun Sango, the General Secretary of the DSM, drove home the point that just a few days to its centenary, Nigeria faces an uncertain future unless the working masses organise to take political power. While socio-economic crisis continues apace with mounting poverty and unemployment despite economic growth, ethno-religious conflicts and agitations for separation are rearing up their ugly heads. Indeed in and around the centenary celebration and especially as the 2015 general elections draws nearer, the national question will continue to be a burning issue requiring urgent solution which the bourgeoisie and the capitalist system are incapable of providing.

A few days before the Congress, President Jonathan supported the call for a National Conference. But this is only a smart move by the government to divert attention from burning issues of unemployment, poverty, closure of Universities and polytechnics due to strikes in education sector etc. If any conference is organized by the government, it will merely be a diversionary talk shop. No section of the capitalist elite can be trusted to organize a truly sovereign and democratic national conference that can guarantee the interests of the working class, the youths and poor masses as well as minority ethnic and religious groups in Nigeria.

Socialists support the convocation of a democratic Sovereign National Conference (SNC) but one called by the people themselves through their mass organizations and dominated by the elected representatives of the working and poor people with a mandate to democratically debate both Nigeria’s future including whether or not it should remain as a single nation. While socialists today stand for the unity of Nigeria which can only be achieved by uniting the mass of Nigerians in active support of a working class government armed with socialist programs, we are completely opposed to the idea of unity by force. This is why we also stand for the right of nations to self-determination up to the point of secession so far as the decision to secede or separate is a product of a democratic decision of the working people of that area. 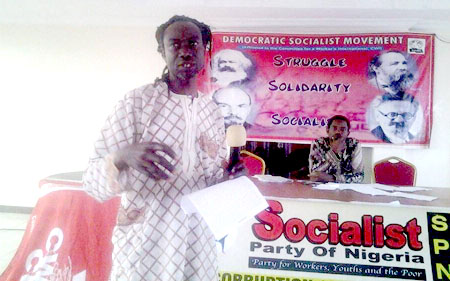 There were many contributions made by comrades at the Congress. A key aspect of the debate was comrades Dagga Tolar and Chinedu Bosah’s report of workers’ struggles and our role and intervention. Dagga Tolar recently won election as Chairman of the Nigerian Union of Teachers (NUT) Ajeromi-Ifelodun, Lagos, chapter. He reported the struggle being led by DSM members and rank and file teachers for a democratic, accountable and fighting NUT. Comrade Chinedu (CDWR Publicity secretary) reported the struggle of low pay workers in DURAPACK (a Chinese-owned slave labour factory) and the CDWR campaign among workers working in precarious conditions.

The Congress confirmed the urgent necessity to build the Socialist Party of Nigeria (SPN) especially in the absence of any serious efforts by the labour movement to build a working class political alternative. Indeed going by the public statements of leading labour leaders over the past months, not only can we conclude they have given up on reclaiming the Labour Party (LP); they all seem to have also completely lost confidence in the ability of the working class to save Nigeria. They are not alone in this despondency. Though couched in big Marxist phrases, statements from a lot of left groups betray similar sentiment. 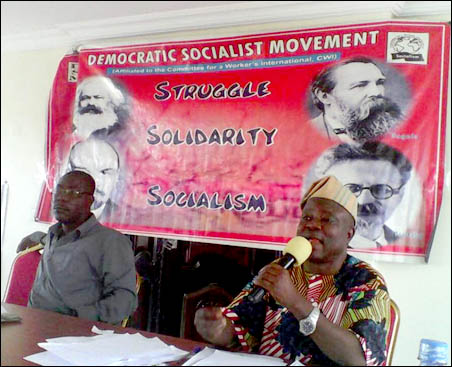 Building the SPN as a broad political party comprising all those willing to fight for a change in Nigeria that can provide both a political leadership in the time of struggle and a pro-working class electoral alternative in the time of elections is the best direction forward. While some “left” are content to wait for a change in the situation, Marxists must provide a bridge from the current period to the next. The SPN can play this role for us by rallying together change-seeking forces and providing an opportunity, especially during elections, to put forward and challenge the neo-liberal policies of the main capitalist parties with alternative socialist programmes and policies which can have great echo when the objective situation changes for the better.

Great news of developments in the SPN’s activities between the last DSM National Committee meeting in March and now was announced. Congress delegates and members were enthused by the news that the party had managed to secure an office apartment in Abuja, the Federal Capital Territory (FCT), as the National Secretariat of the SPN. For a while, it was thought impossible to meet this key (though undemocratic) requirement of the electoral law. Also there were reports of tours and activity in Abuja, the North-west, North central, South-south and South-east zones to build support for the SPN, something that is also needed to meet the requirements for registration. In fact as at the time of the Congress, the SPN has members and supporters in over two-third states of the federation as demanded by the electoral law. This is a significant development which goes to demonstrate that no matter the odds stacked against the working masses getting an electoral voice, we can surmount them with determination. 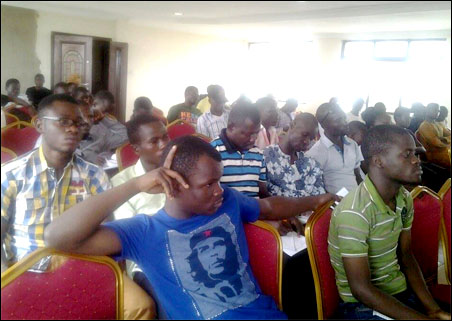 At this stage, we can confidently prepare for registration of the party with INEC. This is why the founding convention of the SPN has now been fixed for November 16 at which the party’s NEC will be elected so that at the latest by February 2014, we can present the party’s application to the INEC. To strengthen this work a new financial appeal for the SPN has been launched. DSM comrades will, along with SPN members, take this appeal to the broader working class movement which we are confident is capable of funding a real alternative political party through both trade union support and the independent contribution of individual workers.

Below we post four resolutions discussed and carried by unanimous votes at the Congress which give a detailed analysis of our prognosis of the capitalist crisis in Nigeria, Africa and the world, the class struggle and offering a socialist alternative.