Programmes and Projections for the DSM Student Wing 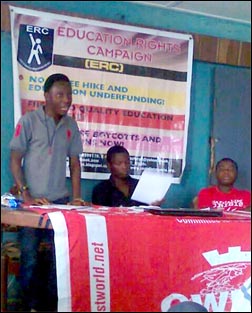 In the last few years, our organization has been striving to ensure that new layers of ideologically and politically prepared comrades and cadres capable of playing major roles in expanding our frontiers in the Student movement are raised across various Nigerian campuses where we either have branches or there are possibility for new branches opens up.

Given the youthful advantage in term of huge capacity for work that is inherent in students generally, there is no doubt that, having sizable numbers of ideologically and politically cleared comrades among this fold will be a veritable tool in building the DSM not only on campuses but also in new areas especially within the community, thus driving the recruitment of new members including female members.

Unfortunately, the result of some these commendable initiatives and efforts has not been so bountiful of success. Though, with the exception of a very handful of new elements, many of whom have not been able to create necessary skills needed to expand our frontiers as a revolutionary organization, we have not been able to generate enough cadre-ship.

At different times, mass disorientation and disillusionment that has for decades led to the fast growing of passively political and apolitical student layer on campuses had been recognized through many analyses as the major contributory factor making it difficult to build and re-build strong left forces capable of playing major roles in the process of rebuilding the degenerate student movement on campuses.

Combinations of different factors have also been attributed to ideological retreat recorded on campuses in the past decade. For instance, massive commercialisation and privatisations of public education at all levels have made many new intakes into various tertiary institutions to take high school fees as a norm

Unfortunately the leadership of student movement either at NANS or various Student union level who as a tradition should assume the responsibility of correcting and re-orientating mass of disillusioned students through various regular and purposive sensitisation programme are themselves ideologically unprepared. They are thus helpless in the face of ruinous neo-liberal policies which various school managements always make them to believe that there is no alternative to. Indeed, globally, ruling capitalist classes are offloading the responsibility of social service funding on poor and working people. In Nigeria too, in spite of the huge resources of the country, the ruling class has refused to fund education but rather continue to starve it of fund with the aim of commercializing and privatizing it. This is the background to the attack on students’ welfare on campuses by various managements. It is the failure of student leaders to understand these realities, and the inability to prepare, through building campaigns and resistance platforms, for struggle is one of the underlining factors to defeat suffered by students.

Most time, various school managements capitalised on gross disorientation among students to clamp down on the conscious students, many without any ideological base but, who are convinced of the need to struggle.

Coincidentally, following the January 2012 general strike and mass protest against the removal of the acclaimed fuel subsidy, which was betrayed by the labour leaders, there has been a level of significant reawakening in the political consciousness and commitments among Nigeria students. This is also a reflection of growing global resistance and revolts against neo-liberal capitalism and austerity. From mass revolts and revolutions in Middle East and North Africa, to ‘Occupy’ movements in US and Europe and recently, mass protests in Turkey and Brazil, young people in Nigeria, nay Africa have seen that they can mobilise for actions that can force down hands of austerity. These movements, in which young people played active roles, have emboldened students and young people in Nigeria that they can struggle for change. Despite the betrayal of January 2012 mass movement by labour leadership, which may have effect on some layers of youth and working people, there is still enormous confidence that Nigeria need and can witness revolution. It is with this background that the current upsurge in students’ protests should be situated. This shows that the current growth in consciousness may be receptive to socialist ideas, which underscores the need to strengthen our forces and undertake bolder actions among students that can make our organization more popular among students and education workers. We must link our traditional activities with skilful programmes, campaigns and initiatives among students, and recruit. It should be noted that the first among the protests carried out so far in support of the ongoing ASUU strike which was organized by students of University of Ibadan, was largely influenced by the independent activities of Education Right Campaign (ERC), the platform formed by DSM.

While there have been pockets of mass protests in various campuses over increasing attacks on students’ welfare and democratic rights, the current strike of ASUU has brought the angle of general actions of students beyond individual campuses to the fore. This is reflected in the push of the NANS Zone D leadership to the left; and the support advance layer among students have given to NANS Zone D actions. This is significant given the general hatred that many students have for NANS as a structure, largely due to serial betrayal and treachery of leaders of its various structures. The generalised disgust, especially among the more conscious section of students against the position of national leadership of NANS on the strike, follows the same trajectory. However, it need to be underscored that the various protests aside being most time on short term issues and mostly defensive action, are also small in relation to the enormity of the attacks. Also the recent increase in activities of NANS Zone D is still minimal, and also reflects the structural and ideological deficiency of the organizations. Some of the actions, which are sometimes product of coaching by JAF, are poorly mobilised for. This shows the limitation in terms of understanding the strategies of struggle; lack of trust in the mass power of students; and ideological cum political barrenness of not just NANS Zone D leadership, but various student union leaders.

This is where our conscious activities as an organisation become vital. We need to give direction to this growing radicalization (even in this infant state) through agitation, non-sectarian but principled actions (either independently or within coalition and mass platforms) as examples and mass campaign among students and their platforms. More importantly, we need to recruit the best among the conscious layer to our banner through these activities. This is the only means to regenerate conscious layer and cadres that can play leading and leadership roles in struggles and movements to come.

Surely, in the coming period, the upsurge in consciousness highlighted above will be further strengthened when the strike is called off. This will further push many student unions to struggle, while NANS Zone D leadership, feeling emboldened with minimal actions it was able to carry out, may want to either use the political capital to seek for more relevance by moving to the left, or using it to seek for pecuniary benefits from managements and governments. It is also possible that students may want to cover lost grounds and recover time after the strike, but even in this least possible circumstance, it can only be a temporary situation.

Worth stating also is the impact of ASUU strike on consciousness of students, relative to strike by other staff unions in the education, especially tertiary, sector. This is because ASUU strikes mostly raise the question of funding as a major demand, which expose the political bankruptcy of ruling class. It is this that has made ASUU strikes have more profound effects on consciousness of not just university students, but students and the populace in general than strikes by others staff unions. This confirms socialists’ position that only collective demands that seek to address problems facing education, and linking it with the ultimate demands of changing society in the interests of the majority working people, youths and the poor, can mobilise the needed force to achieve significant progress. This needs to be linked with collective mass actions of education staff and students, in conjunction with labour movement support. This also shows the dire need for intervention in struggles of students and staff in polytechnics and colleges of education. There is enormous potential for recruitment in these areas.

One of the most striking among these protests is the spontaneous students’ protests that greeted the announcement by President Jonathan on May 29, 2012 on the renaming of University of Lagos as Moshood Abiola University. In less than 30minutes after this announcement, over ten thousand UNILAG students hit the streets of Lagos in a protest against the renaming of the institution. Having this kind of mass protest not on core issues like fee hike or underfunding but on a mere renaming of a university whose Students’ Union has not only banned but has not also seen students’ protest for several years shows that the general anger among students, and youths, can get expression through many channels. Moreover, as we have said in previous documents, many apolitical or passively political students can be drawn to arena of struggle through seemingly ‘trivial’ issues that they see as attack on their worldview, sometimes petty bourgeois. Our skilful intervention, linking such ‘trivial’ issue with the anti-poor character of government can, if not lead to recruitment, change the world view of some of these students. It can also embolden the politically conscious layer among these students, who are generally weakened previously. Since the Unilag protest, a layer of students is getting radicalised, while another protest had taken place over hike in prices of goods. More students are now interested in restoration of union.

It is however vital to state a caveat that not all protests are genuine. On the basis of confused character of student consciousness, there can also be reactionary protests and campaigns, sometimes instigated and led by pro-authority and pro-state elements, and drawing disillusioned and sometimes confused layer of students, along. Some of such protest may be divisive. Even where we are not going to support such protests we should skilfully underline what is wrong in these protests through statements, and if possible agitations and discussions, with a view to: reaching less disillusioned layer; disarming the effect of such action on general student movement; and uniting students in common struggle.

Going by this background it is apparent that the objective condition for us to reach out and win over a radical layer of students who are searching for a comprehensive and political solution to the enormous socio-economic problems is becoming favourable. Therefore, to be able to bring the current favourable conditions to the advantage of expanding the frontiers of our organization among students and youths raises the urgent need to:

(1) ensure that a well-defined organizational structure is developed for the student wing of the organization at all levels.

(2) ensure well-structured programmes of activities that can attract mass of students on Nigeria campuses are also developed.

We must also play active role in various workers’ struggles both within and outside campuses. There are instances in which students feel indifferent or are opposed to staff union struggles and agitation, possibly due to previous betrayal of students by some staff and may be staff union leaders. We should not take such approach. We should openly support such struggles, while not overlooking the shortcoming of approaches of staff union leaders to students’ struggles.

As a revolutionary organisation with the central aim of building a working class movement, it is important for student comrades to clearly understand that we must not limit or restrict our work to campuses alone. This therefore means that we must be active outside our respective campuses. In doing this, we will help in spreading our ideas and developing ourselves as revolutionaries by learning from the experiences of workers in struggles.