SPN forging ahead with a “June 12” Symposium in Osun State 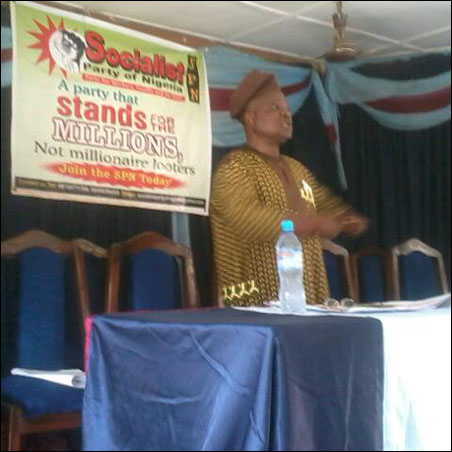 The Osun State chapter of the Socialist Party of Nigeria (SPN), in conjunction with the local Democratic Socialist Movement (DSM) chapter, chapters held a public symposium on June 12, 2013 with the central theme, June 12 Struggle; 20 Years After: What Democratic Gain for the Working and Poor People? The Symposium had in attendance over 40 persons including civil servants, teachers, students, youths, retirees, lawyers, artisans, etc. At least four women were in attendance. It was held at the NUJ Hall, along Ikirun Road in Osogbo.

The programme started with Comrade Segun Sango, the Protem National Chairperson of SPN, as the guest speaker, giving the lead presentation on the state of the nation, and the failure of the capitalist ruling elite to bring any positive development to the country despite the huge resources at the country’s disposal. He clearly highlighted the fact that under the current neo-colonial capitalist arrangement, working and poor people of Nigeria should not expect any fundamental improvement in their living conditions. He averred that the so-called mega-opposition being built will only recycle the old layer of looters under different coloration. He made a comparison between the “progressives” of the Second Republic and the current set of bankrupt and highly corrupt progressives, who are only progressive in their organized nature of looting. He asked rhetorically how many politicians, including those in the so-called opposition and self-acclaimed “progressive” parties have their children in public schools. Yet, they always claim to have transformed education sector. He stridently canvassed for the working and poor people to join and build the SPN as a mass party of the working people. He highlighted the programmes and ideas of SPN, and urged the people to familiarize themselves with the party’s manifesto and constitution.

Comrade Alfred Adegoke, the Osun State protem Chairperson of SPN, went down memory lane to underline the dubious nature of current politicians, especially the opposition, who are claiming to be fighters for the actualization of June 12 presidential mandate. He exposed their hideous character during the struggle. He linked this with their current anti-poor politics and policies. He also exposed the bankruptcy and sheer hypocrisy behind the so-called giant strides of the Aregbesola government in Osun State which at best have been mere window dressing, albeit at exorbitant cost to the state. He picked on the job creation policy of the government which he noted was nothing but mere degradation of humanity; a point reiterated by Comrade Sango during the question and answer session. He linked this with the contract system in the state, a situation in which huge contracts running to several billions of naira are awarded to crony contractor, while the state works ministry, which has capacity to gainfully employ several thousands of youth, is non-functional. Despite the so-called “giant strides”, potable water supply is simply non-existent in the state. He called on people to join the SPN train if we are to move forward. 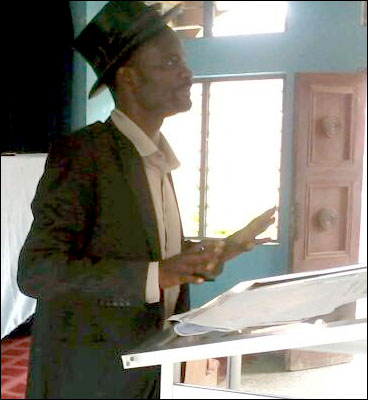 Comrade Kola Ibrahim further expatiated on the characterization of the Aregbesola government by dwelling on the education reform of the government, which at best has been haphazard and tokenistic. He maintained that what the government is doing in the education sector is nothing more than patchwork rather than a reform. He maintained that the SPN will mobilise the huge resources of the state to undertake massive educational revolution at all levels and across the state by deploring modern technologies including ICT to give the best education to the youths, as against current arrangement of giving out computer tablets to some students without improvement in basic necessities â€“ equipped classrooms, laboratories, libraries, staff working conditions, etc. He called on people to not only join but mobilise their friends, families, co-workers and acquaintances to join the party.

After the general presentations, questions came on various aspects of the lectures. One of such questions has to do with what socialism really is. This was clearly explained by Comrade Sango. Sango emphasized the fact that a workers and poor peoples’ government will have to place the commanding height of the economy under public ownership. To avoid bureaucratic strangulation and corruption, he stressed that the entire economy and polity of the society must be run through democratic control and management by the working masses themselves. This, he said, is the surest way to avoid the kind of debacle that led to the collapse of the former Soviet Union and other countries that once overthrew capitalism. Other questions ranged on how to build the party in terms of publicity and awareness. There were also questions as to whether we are reaching out to other like minds. There were also words of commendation for the SPN and DSM for the work they are doing. These questions were well attended to by Comrade Sango.

Over N2, 600 was raised as fighting fund, while materials worth about N1, 000 were sold. The programme was a major success when viewed against the background of the fact that we seem to be the only actively genuine voice that is still raising issues in the state as virtually all the so-called civil society organizations and activists, and parties like NCP and LP in the state have dissolved into the government, obviously for pecuniary interests. In fact, a state government-funded June 12 programme was organized the same day by the so-called civil society practitioners, in conjunction with the state government. Obviously, this rent-a-crowd cum free-meal programme was nothing more than mobilization for the next political project of ACN/APC in 2014, as the programme was dominated by “big men” of the government and the ruling party in the state, with no debate about government policies and programmes.

The quality of our symposium is best measured by the readiness of many of the participants to actively be part of our activities. We hope to consolidate on the gains of this symposium. For a party that is mobilizing against the established gangs of political and economic robbers, it is a feat organizing this kind of programme.

Also present were operatives of the State Security Service (SSS) who came to spy on us. This again underscores the growing militarization of the society, and attempt at gagging dissent views and resistance platforms by the government under the guise of maintaining security, when in reality it is the governments at all levels, through their bankrupt and anti-poor policies and corrupt politics are engendering insecurity and terrorism. This is why party like the SPN must survive.