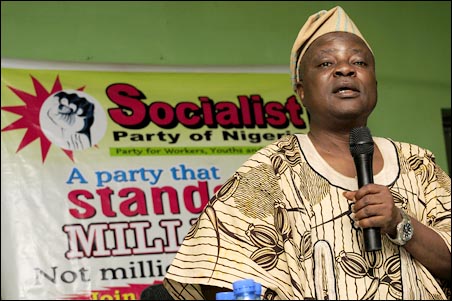 On May 29, 2013, the Socialist Party of Nigeria (SPN) Oyo state chapter was formally launched with a public symposium held at the state secretariat of Nigeria Union of Journalists (NUJ), Iyaganku, Ibadan.

The symposium, which held on the day set aside by the Federal Government to mark the anniversary of the return to civil rule and tagged as “Democracy Day”, was attended largely by working class people, especially civil servants and artisans, and students. Also in attendance were socialists, labour and civil society activists, from within and outside the state.

The symposium started with solidarity songs led by comrade Abbey Trotsky, the SPN Protem Secretary in the state, who also doubled as the moderator of the meeting. Thereafter, Segun Sango gave a brilliant introduction on the theme of the symposium which is 14 years of civil rule and the monumental failure of the Nigerian ruling elite: a call for a socialist alternative. 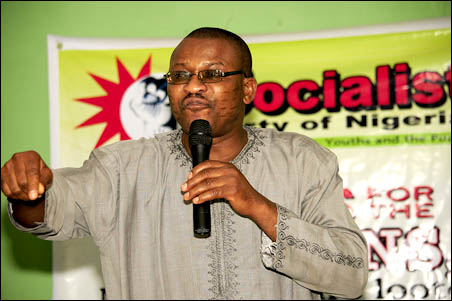 Sango convincingly argued that only socio-economy system in which the commanding heights of the economy is nationalized and placed under a democratic workers’ control and management is capable of taking Nigeria in particular and the world in general out of the economic woods that we are currently circling in. He questioned the rationale behind the system in which the working class is effectively alienated from the wealth created by their labour. He concluded that capitalism, especially the brand in the backward nations like Nigeria characterized by so much primitive accumulation, can no longer engender progress in society.

Given the existing objective condition, Sango maintained that the time is now more than ever for the working class to urgently begin to pose the question of political power through an independent workers political platform that would base itself on the correct socialist perspective. He therefore called on the workers’ movements to embrace the SPN as a vehicle of struggle towards achieving the desires and aspirations of the poor and oppressed Nigerian masses.

He also drew attention of the participants to the current challenges of registering the party with INEC, one of which is the fact to have on the national executive individuals from at least two-third of the states of the federation. To surmount this INEC undemocratic requirements, Sango called for the full participation and involvement of workers, youths, students and artisans in the activities of SPN which by its tradition would continue to remain active in struggles and agitations geared towards winning necessary improvement in the lives of the masses and at the same time expose the deceit and bankruptcy of the ruling elites. 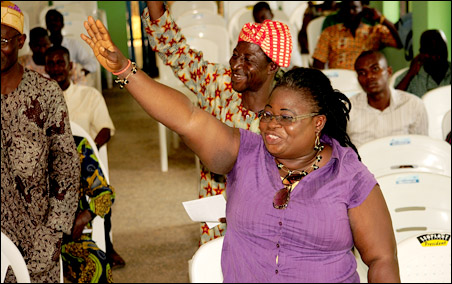 Every other lead speaker also correctly painted the gloomy, but real picture of appalling living conditions of the poor masses and infrastructure decay as result of anti-poor policies of thieving government at all level. The general submission was that, as long as the political scenes continue to be dominated by capitalist ruling elites which constitute all political parties in Nigeria today, there existed no prospect for the Nigerian poor masses!

In his own submission, Dr Demola Aremu specifically called on participants to join the SPN in its quest to create a better Nigerian society. He urged workers to shed themselves of any illusion that any of the bourgeois parties (PDP, ACN etc) can improve their conditions of living. He cited the example of the consensus among these parties not to implement the national minimum wage as a clear case of gang up against the interests of workers. He lauded the initiative of the SPN at this time in our history as a nation. That, the need for a party like SPN that will provide equal access to all irrespective of status is more germane now than ever!

The event experienced a lively contributions, comments and questions session which saw participants seeking clarifications and making comments on issues raised during the proceedings. Appreciation was given by the representative of the IAR&T workers on the role played by SPN members during the struggle to reclaim their unpaid hazard allowance. He informed the gathering that the struggle is being resolved in favour of the workers.

Generally, the event echoed the aspirations and desires of the oppressed strata of Nigeria. It presented an alternative to the deceitful gathering of the ruling elites. It also presented a clear demand on behalf of the working people and called on the workers, youths, artisans and genuine progressives to join with the initiators of the SPN to build an alternative political platform that will continually represent the welfare of the entire masses.

Sixty nine participants signed the attendance register, out of which 15 indicated interest to join SPN and collected a membership form. 8 copies of the SPN Manifesto and Constitution were sold while a struggle fund of N1, 240 was realized.

Meanwhile, a three-person committee, comprised of Folorunso Ajala, Protem Chairperson; Abiodun Bamgboye, Protem Secretary; and Veronica Adeyanju, Protem Women Leader, has been set up by the members to steer the activities of the party in the state in the interim.