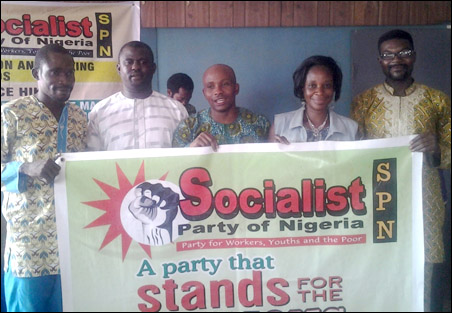 The SPN was initiated by the Democratic Socialist Movement (DSM) nearly one year ago as a response to the widespread yearning of workers, youth and poor masses who feel disenchanted and unrepresented by the existing pro-capitalist political parties and their anti-poor policies.

Attendance at the meeting reflected the potential of the SPN to grow as a political party accepted by the masses of change-seeking workers and poor in Nigeria who desperately desire a political party that can stand for their interests. About 27 people came to the meeting. Not all of them were DSM members. A few were activists we met at protests and other activities in the labour movement, Joint Action Front (JAF) as well as intervention in struggles. 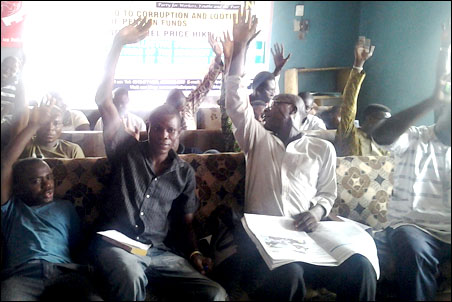 The purpose of the meeting was to elect a state leadership that could further drive the work of the party in Lagos State. As the protem National Chairperson, comrade Segun Sango, pointed out “we have accumulated great experience and political credibility in Lagos state during our activities in the National Conscience Party (NCP) before and during the 2003 elections. A member of the DSM who was NCP’s Senatorial candidate in Lagos West, Lanre Arogundade, scored over 77,000 votes. Meanwhile these were actually votes the ruling Alliance for Democracy (AD) – now Action Congress of Nigeria (ACN) – could not steal. In reality, we won more votes than that. But even at that, the 77,000 votes declared for us despite running a working class campaign, putting forward clear and undiluted alternative socialist programs and against corrupt and adept election riggers of the AD who shared out millions of Naira to voters fully demonstrates that a pro-workers and poor masses’ political party like the SPN can make impact and win elections”.

These were inspiring words especially for those at the meeting. Due to the heavy monetization of elections in Nigeria, many working class and poor people have become so disenchanted to the extent of thinking there could be no way out. Pro-establishment elements often taunt: a working class and poor peoples’ party cannot win because the same people you claim to represent would accept money from other political parties and vote for them.

But as Segun Sango argued, “we have passed this stage. We have demonstrated enough that if workers and poor people see a credible alternative party, they will embrace it with all their hearts. If we under the NCP could give Bola Tinubu and the AD a run for their money in 2003, there is no reason why we cannot give them a greater challenge this time around under our own party (the SPN) and especially now when vast majority of people in Lagos have not only grown tired of the anti-poor policies of the ACN government which has been ruling since 1999 but are desperately searching for an alternative political party”. Immediately after the meeting, the new executive held their first meeting and scheduled another meeting in a week’s time to plan programs to immediately begin to build the party in Lagos State. 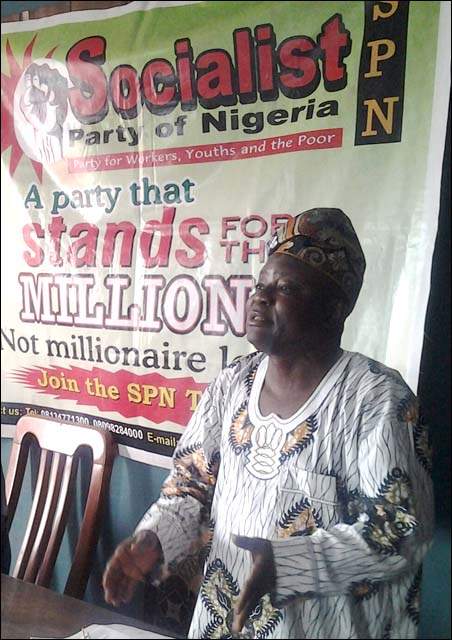 With the election of the Lagos state executive, the SPN has passed another hurdle in its path towards getting registered by the Independent Electoral Commission (INEC). In some other states outside Lagos, the SPN has functioning state executives and structures. The next stage now is to form a national executive reflecting Nigeria’s federal character. For this to happen, structures of the SPN have to be built in other states especially in the North and the East. This is a task which all members and supporters of the SPN must strive to accomplish over the next few months. This is one of the reasons we continue to urge all working class people and poor Nigerians desirous of a real change from the corrupt capitalist ruling elites daily looting and ruining Nigeria to join us to build the Socialist Party of Nigeria (SPN).

Despite the immense obstacles erected by the military-imposed Constitution and the Electoral Act against poor and working class groups seeking to form political parties, the mood at the meeting again showed we are not short of the motivation, commitment and drive to achieve it. Just a month ago at the DSM National Committee (NC) meeting, a fundraising target of N1 million launched towards the kick-starting of building of the SPN was surpassed by over N1.2 million in pledges and donations. Likewise at this meeting, more people made further pledges of N18,000 towards the funds being raised for the building of the SPN and an additional sum of N5,000 was collected in fighting funds.

In line with its inherent anti-poor character, INEC, the national electoral body, at a recent meeting with some pro-establishment political parties announced its plan to increase the party registration fee from N100,000 to N1 million. This is one of the measures to ensure a pro-working people party does not come into existence. However, INEC is not the main culprit but the Constitution and Electoral Act with provisions for onerous and undemocratic requirements for registration of party. The SPN shall fight all undemocratic obstacles towards registration of a party. The meeting therefore called on all working class and labour activists to condemn and campaign against all undemocratic and anti-poor conditionalities for party registration.

If you are dissatisfied with the various anti-poor political parties ruling at the federal and state levels, join the SPN today so that together we can build a political party that can oust the corrupt Nigerian ruling class and their unjust capitalist system and replace this with a workers and poor people’s government that can, with the aid of democratic socialist policies, begin to run Nigeria in the interests of workers, youths and poor masses.