ï¶ NO GOING BACK ON CONDUCT OF ELECTIONS THIS SEMESTER! 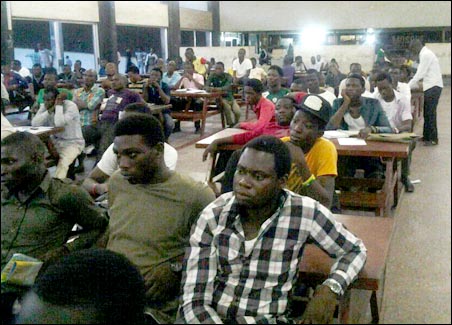 It was another thought-provoking session on April 3, 2013 at a public symposium organized by the Students’ Union Transition Committee (SUTC) at the Obafemi Awolowo University(OAU) at Ile-Ife. The symposium discussed the theme, “banning and unbanning of the OAU Students’ Union; lessons from the past and a journey into the future”, as a way of finding the solution to the continual proscription of OAU students’ union.

While giving the lead discussion, H.T. Soweto disapproved of the long stay of members of the Transition Committee and called for an immediate congress to form electoral and elections petition committees. The tumultuous applause that accompanied Soweto’s speech reflected the unanimous support his position gained from the over 200 students present at the symposium. Similarly, other speakers took turn to charge students on the need to continually mount pressure on the SUTC to set up an electoral commission in a congress. The SUTC was also advised not to elongate its stay out of sheer opportunism or treacherous loyalty to the university administration, but to follow the popular demand of students for an elected union.

The response by students during the ‘questions and comments’ session of the symposium reflects frustration and anger. Allegations of opportunism, crookedness and insincerity of purpose were leveled against the SUTC by students who spoke during this session. While answering and reacting to the questions and comments, Soweto asked the SUTC to categorically state at the symposium when a congress will be called to discuss the formation of electioneering committees as earlier agreed. The Chairman of the SUTC, AY Toes, while stating the committee’s position on congress announced that a congress of students would be convened at Amphi Theatre on Friday, April 12 by 8am.

Students supported this SUTC proclamation, but however still expressed doubts about the sincerity of the announcement. To avoid the SUTC backing off on the arrangement, students demanded that an adhoc committee be formed to take up aggressive mobilization for the congress whether the SUTC participates or not. Consequently, a five person committee was formed to take up the mobilization for the congress.

The DSM and ERC OAU Chapters played a significant role in organizing the symposium. Indeed it was the 9-day ultimatum issued by the ERC which forced the SUTC to organize the symposium instead of the demanded congress. Even when the symposium was announced, the DSM and ERC with other left organisations jointly mobilized students to the SUTC symposium. The result of our mobilization is indeed the far-reaching decisions reached at the symposium.

In our view, concrete progress is being made in the struggle for students’ union restoration. At the end of the symposium, students honoured the memory of the late Venezuelan president, Hugo Chavez, with a candlelit procession. This was in response to the call of the DSM members. The essence of this program was to draw appropriate lessons from the political situation of Venezuela and as well proffer the way forward for the working and poor people of Venezuela as well as the next step for the Bolivarian revolution.

After a small procession which took off from Anglo-Moz car park and ended at the Students’ Union Building (SUB) where there were discussions and debates on the political situation in Venezuela and the important lessons to be drawn in relation to Nigeria. While some referred to Venezuelan economy as “Socialist” making reference to many of its populist policies and reforms in the education, health as well as the nationalization of some parts of the economy, we, while acknowledging these achievements, argued that this not yet genuine socialism. Certain key sectors of the economy still remain in the hands of capitalists and most of the very positive reforms carried out under Chavez were carried out with a top-down approach in such a way that the Venezuelan working masses were shut out. This has in turn led to big contradictions in the form of a corrupt layer (the boli-bourgeoisie) developing on the back of Chavez movement thus creating widespread discontent among the workers and poor masses.

While Chavez’s popularity among the masses was never in doubt until his death, this cannot be said for other members of the state bureaucracy and Chavez movement most of whom are widely hated and could only win elections by hiding behind Chavez’s appeal among the masses. This is what explains the growing support in recent elections for the counter-revolutionary right. In reality, Venezuela is at a cross-road between capitalism and genuine socialism. The fate of the Bolivarian revolution and that of the important social reforms already achieved are at risk now that Chavez is dead more than ever. We argued for a complete break with capitalism and a rounded-out revolutionary socialist programme as the only way to fully consummate the Bolivarian revolution in Venezuela. This will require a bottom-top democratic control and management of the economy and decision-making by the working masses themselves

It is significant to note that millions of Venezuelans trooped out to mourn the death of Hugo Chavez. This cannot be detached from the aforementioned policies of the regime which meant a great difference for the working masses. It also reflects the huge prospects of organising society in a democratic socialist order. It however also shows the dire need to improve on this with the total nationalization of the commanding heights of the Venezuelan economy and the democratic control and management by the working and poor people of Venezuela.

The programme ended with comrades urging the participants to join the Socialist Party of Nigeria (SPN) as a step towards building a mass based working people’s alternative to the existing capitalist political parties that are incapable of implementing pro-people’s policies such as free education, free health care, decent jobs, etc.