Call for Protest Letters and Solidarity 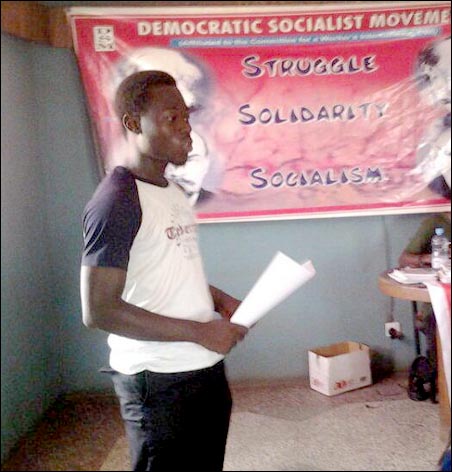 The Management of the University of Ibadan (UI) has continued its notoriety of victimizing student activists who lead students to challenge its highhandedness and demand improvement in welfare condition. The latest attack is the recent rustication for one academic session of a student activist, Comrade Michael Ogundele. Michael, who is the Secretary of University of Ibadan branch of the Democratic Socialist Movement (DSM), was victimized on the basis of a false allegation.

This rustication is part of politically-motivated plan to attack the DSM and its members for mobilizing and leading students in struggle against management’s anti-poor, neo-liberal education policies.

We therefore call on organizations and individuals including trade unions, human rights groups, staff unions in universities, students unions, youth groups, activists and socialists, locally and internationally, to demand end to the brutal attack on student activists in University of Ibadan, and immediate and unconditional recall of Michael Ogundele.

It is instructive to state that the query was issued exactly a week after a massive and spontaneous student protest in which members of DSM, including comrade Michael, played a leading role and which forced the University management to retract some of its anti-student policies like hike in accommodation fees.

However, in both his response to the query letter and physical appearance at the panel constituted by the school management, Comrade Michael pleaded not guilty to the allegation of misconduct. As a matter of fact, Comrade Michael was on Industrial Training (IT) from December 12, 2012 to January 12, 2013 when theuniversity actually opened for the new academic calendar. It was within the period of this IT that the university management gave the directive that all students should vacate the hall of residence on or before December 24, 2012 while those on IT should register for a temporary accommodation.

In compliance with this directive, Michael was among the first few set of IT students who on December 6, 2012, actually registered for a temporary accommodation with the Industrial Training Coordinating Centre (ITCC) as directed. This was with an expectation that the application would be processed with an immediate allocation of temporary accommodation to all registered IT students before December 24, 2012, the deadline the University management set for all students to vacate the halls of residence.

Given the fact that the motive behind forcing students out of the hall of residence by the school management was just to perfect the strategies and tactics to impose the hiked accommodation fees and other anti-students policies like prohibition of cooking in halls on students upon resumption, the question of immediate provision of alternative accommodation for those who were compelled to stay behind on campus for one academic purpose or another was not on the priority list of the university management.

This explains why up till late hours of January 2, 2013, no allocation for temporary accommodation was assigned. It is this unwarranted delay in the processing of the application for the temporary accommodation due to the negligence on the part of the university management that created the condition why many students upon their return to campus on January 2, 2013 after the yuletide break fell victims to a lack of place to lay their head.

In the midst of all this situation, Comrade Michael was able to meet a student with a similar problem who offered him a temporary place to stay in his uncle’s place off-campus pending the time all issues connected with the temporary accommodation would be resolved. With the temporary accommodation, Michael, decided to go to his former room to move out his luggage, without any intention whatsoever, to continue to stay in the room. In less than three minutes in the room, he was accosted, arrested and detained for almost 15 hours at the university security post.

Comrade Michael was able to prove that the negligence on the side of the university management to allocate temporary accommodation to all registered IT students before December 24, 2012- the deadline set for all students to vacate the halls of residence – was the cause of his presence in the said room. Hence, the university management had to cook-up another false allegation to justify their original plan which is the victimization of Michael for his leading role in the struggle of students.

The university management on March 26, 2013, over a month after he had appeared before Central Students Disciplinary Committee (CSDC), handed him a letter of rustication from the university dated February 28, 2013. Curiously, the first paragraph of the reads, “the Central Student Disciplinary Committee at the meeting held on Wednesday, 27 February, 2013, considered the allegation of Examination Misconduct leveled against you to the effect that you were found in Tedder Hall on Wednesday, January 2, 2013, about 21.50hours, in defiance of the directive of the University Management that all students must vacate the halls of residence latest by 6.00pm on Monday 24th December, 2012.”

Taking a look at the above-stated allegation, there are a lot of discrepancies and contradictions between the query letter dated January 7 2013 and the letter of rustication dated February 28 2013 upon which the decision of the committee was predicated.

Again, how the claim of “illegal” presence in Tedder Hall on the above-stated day became examination misconduct is quite baffling, more so that no examination was taking place in the hall of residence on that date.

According to (1b), page 50 of Student Information Handbook for 2008/2009 session (28) different offences classified as Examination Misconduct and their respective sanctions are clearly outlined. Interestingly, none of these is “illegal presence of students in the hall of residence at any stipulated time”.

In the same Student information handbook, the procedure for handling cases of examination misconduct is also described in (1a) on page 50 as a process emanating from the Faculty to the CSDC for the final determination.

As a 300L student of department of Zoology, Faculty of science, there has never been any time Michael received any letter of invitation to face any disciplinary committee at either department or faculty level in any case related to examination misconduct.

But these contradictions are not surprising or accidental. As we have pointed the entire purpose is to attack Michael and thereby hit the DSM for our political role in students’ struggles.

We therefore call for protest letters, locally and internationally, to the management through the e-mail addresses below demanding the immediate and unconditional recall of Michael Ogundele, and an end to victimization of student activists and attack on democratic rights. Phone calls and text messages can also be sent to the phone numbers.