GOVERNMENT SHOULD IMMEDIATELY PAY ALL PENSION ARREARS AND 2/3 GRATUITY NOW! 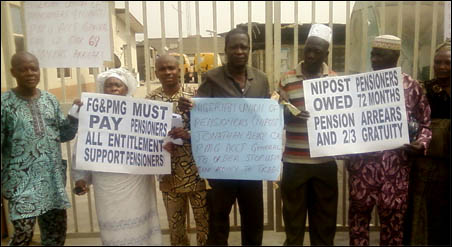 Since December 24, 2012, the offices of the Nigeria Postal Service (NIPOST) throughout the country have been under lock and key. This is as a result of the picketing of the post offices by the retirees of the NIPOST protesting the non-payment of 72 months arrears of pensions and two-third of gratuities being owed by the government.

It appears the top functionaries of NIPOST led by Postmaster General Mori Baba are making huge fortune out of the funds meant for pension and gratuity while the pensioners suffer. This is not out of place given the recent revelations of monumental scandal in pension fund administration where billions of Naira has been brazenly embezzled. For example, the Pension Reform Task Team uncovered a N151 billion fraud recently.

As a result of this callous and inhuman treatment of the pensioners by the NIPOST management in connivance with top bureaucrats of the ministry of communication many of them have dropped dead. According to the NIPOST pensioners association, 422 of their members have died since 2008 due to lack of resources to take good care of themselves. Indeed, as recently as January 8, 2013, a pensioner popularly known as Iya Ibeji slumped and died in Lagos. It is reported that the unfortunate death of these pensioners is a goldmine for some officials who pocket their entitlements. This perhaps also accounts for why the management deliberately delays the payment of the pensioners’ entitlements hoping some pensioners would drop dead.

Indeed, the management of NIPOST has been bedeviled with financial rackets. We were informed that NIPOST management prepares two pay slips, one is given to workers to sign while the other tendered as the official pay slip. This gives the management opportunity to inflate the official pay slips beyond what workers received just to enrich a few. Besides, workers of NIPOST are currently being owed between 3 and 6 months’ salary. In fact, a worker with the Agege post office in Lagos has only been paid half of his salary on a monthly basis since May 2012. 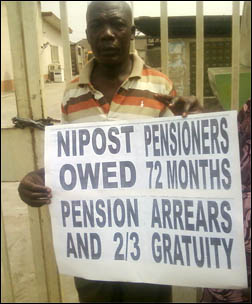 The Campaign for Democratic and Workers Rights (CDWR) calls for the opening of the books and financial records of the NIPOST for public scrutiny by elected representatives of workers to ascertain how funds are managed. We call for the removal of Baba Mori and the minister of Communication, Mrs. Omobola Johnson for deliberate denial of NIPOST pensioners and workers their entitlements.

Besides some of these pensioners, particularly those that retired in the 1990s, earn as low as N12,000. This is scandalous and callous in country where the political office holders and top government functionaries pay themselves jumbo salaries, allowances and perks, including building houses worth billions of Naira in addition to daily looting of treasury.

We of the CDWR solidarise with the protesting pensioners and demand the immediate payment of all their entitlements including the 72-month arrears and 2/3 of their gratuity. We also encourage the pensioners to sustain the picketing of NIPOST offices across the federation until all entitlements are paid. We appeal to all workers of NIPOST to show sympathy to the pensioners and actively support the ongoing picketing. We also call on the Nigeria Labour Congress (NLC) and the Trade Union Congress (TUC) to spearhead the struggle for pensioners to be paid not only their entitlements but also living pension that takes into account the present cost of living and inflation trends. To wake the leadership of NLC and TUC up to this responsibility the pensioners should pick a date to picket all the offices of the labour centres in the country.

Campaign for Democratic and Workers Rights