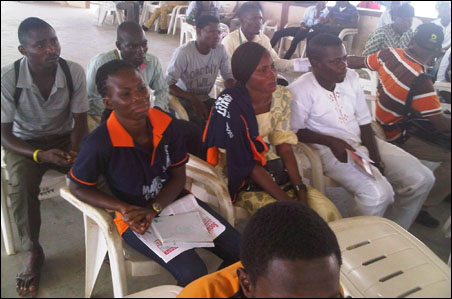 On 22 and 23 November 2012, the Democratic Socialist Movement (DSM) branch at the Adekunle Ajasin University Akungba-Akoko (AAUA), Ondo state, organised “DSM WEEK” – an annual programme to celebrate the ideas of socialism among students and education workers.

This year’s event held on two days with a public symposium on each day. Altogether, about 400 students attended the two symposia at which topics around rebuilding student unionism, the state of the nation, socialism, etc. were discussed.

Leading discussion on the theme: “Socialism – A Wider View”, Dagga Tolar started by introducing the basic ideas of socialism. This he did by comparing the merit of socialism with capitalism which prioritises profit of a few over the needs of the vast majority. A socialist system will use the resources of society for the interest of the majority through a planned economy and public ownership of the key sectors of the economy under workers’ democratic control and management.

Socialism is the only just and egalitarian economic system that is capable of fulfilling the dreams of humanity by translating and harnessing human potentials and resources for the democratic good of all, unlike the capitalist anti-poor and profit-oriented socio-economic system which has subjected the vast majority into mass misery and penury. 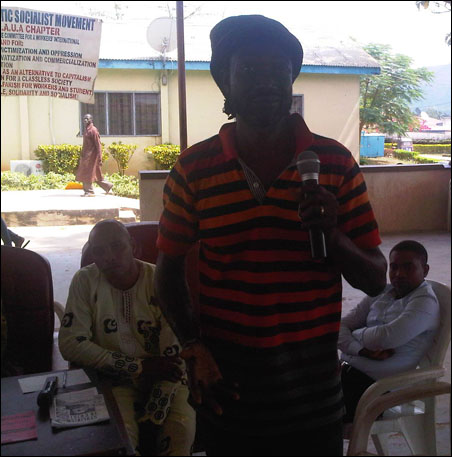 Dagga Tolar refuted the pro-capitalist argument that socialism is impossible. He made it clear that a socialist society is possible and achievable if only the workers, youths and oppressed masses can take their destiny in their hands by embracing the theoretical and philosophical ideas of Marxism and its methods of revolutionary struggle which, in 1917, freed the working masses of Russia from the chains and fetters of capitalism.

It is instructive that Karl Marx and Frederick Engels formulated the theoretical and philosophical foundation of the ideas of scientific socialism against the hitherto primitive and utopian socialism. It was this scientific socialism that made October 1917 revolution a possibility and success. Russia’s socialist revolution of 1917 proved to the whole world that social change and a socialist society is possible and practicable. For the first time in the history of mankind, the working and toiling masses took power from the capitalist minority of oppressors through revolution and began to build a democratic and egalitarian society, free from exploitation of the vast majority.

However a combination of the economic backwardness of Russia and, in the years that followed, the defeat of revolutions elsewhere, especially in Germany between 1918 and 1923, prepared the ground for the rise of Stalinism (counter-revolutionary political outlook of the caste of privileged bureaucrats who took power in Russia from 1924). The Stalinist privileged bureaucracy shipwrecked the revolution, destroyed its huge achievements it had started to make in terms of working people running society and social programmes in education, health, infrastructures and the condition of women. While for a time the planned economy delivered, in a distorted way, improvement in living standards, industrialisation and development, it was increasingly blocked by the dictatorial rule of the privileged Stalinist elite. In the early 1990s, faced with mounting opposition and the threat of stagnation, key sections of the Stalinist elite used their position to divert popular opposition to their rule into illusions in capitalism whilst, at the same time, stealing the nationalised economy’s assets in order to restore capitalism and become capitalists themselves, something which was an incalculable disaster for the working masses.

The 1917 social revolution in Russia inscribed on its banner a programme for the world revolution and workers’ democracy, a programme which is vital today if the yearnings for change by the working class the world over would succeed. Despite the distortion of Stalinism and the propaganda of capitalist media, the Russian revolution while it lasted in its initial, more healthy, form provided a good example of how society can be organised in the interest of the majority.

Mr. Layi Oladipupo, a lecturer from Philosophy Department, while contributing to the discussion said socialism is the best system of economy and government and has the best ideas and programs to deliver the suffering and working masses of Nigeria from the backwardness that capitalism has thrown the country into. He urged Nigerian youth, working masses, students and all change seeking individuals to embrace the example and ideas of the working masses of Russia that led to the 1917 social revolution led by the Bolshevik party under the leadership of Lenin and Trotsky.

Segun Oriji (Triple O) spoke about the sorry state of Nigeria’s economy and the urgent need for a social change. He stated capitalism has failed humanity because it has outlived its usefulness; hence the desperate and urgent need to replace it with socialism.

It is apparent that capitalism is doomed world-wide as the working masses of all countries and nations seek to break the chains of their oppression and exploitation. The economic crisis of Europe, America and Asia and the Arab spring are confirmations and validations of the apparent failure of capitalism everywhere.

Dagga Tolar and other speakers’ speeches attracted lot of questions, reaction and observations from the audience who were largely students. Many students expressed joy for being part of the programme. A few registered their displeasure about the economic situation in the country which is a consequence of the capitalist anti-poor policies of the government.

Some of the students said that the Nigeria’s economy started to worsen ever since the introduction of anti-poor policies like privatisation. Privatisation is one of the key features of capitalism and is not in the interest of the masses. It is a fraudulent means by which the capitalist ruling elite systematically cart away the collective resources of the society at the expense of the poor and working masses. Privatisation is an anti-poor policy, a policy which makes the rich get richer and the poor get poorer.

Leading discussion the following day, the November 23, on the topic: “Nigeria at 52” was Dr. Okajare. He traced the history of Nigeria as a Nation and came to the conclusion that Nigeria was fraudulently and undemocratically conjured by the British colonialists without even consulting the people if they wished to form a nation together. This is one of the reasons why unity among the major ethnic groups has been difficult if not impossible ever since. Nigeria gained her independence on 1st of October 1960, which means ordinarily speaking that Nigeria’s journey as an “independent nation” started fully in 1960, some 52 years ago. Surprisingly and unfortunately Nigeria has nothing to show for her 52 years of independence.

Comrade Dagga Tolar, while contributing to the discussion, called for the forming and building of a mass workers’ political party to overthrow capitalism. This is very crucial because none of the political parties in existence stand for the interest of the workers and poor. We need such a party more than ever today. This is why the DSM has come with the initiative of the Socialist Party of Nigeria (SPN).

Saka Olokungboye (S02) speaking on “Building Student Unionism” urged students to build their unions as fighting platforms of struggle. He also urged them to join the DSM and support the activities of the Education Rights Campaign (ERC) which is a platform formed by the DSM to campaign for free, public-funded and democratically-managed education sector.

The symposium ended on this note thus signalling the end of the annual “DSM Week” for the year 2012. This is one of our most successful “DSM Week’s” not only because of the large turnout of students but also in terms of those attracted to us and socialist ideas as a result. 15 students indicated interest to join us and about 60 copies of the November/December edition of Socialist Democracy (SD) were sold.