A Grim Battle for Survival Opening up in Lagos 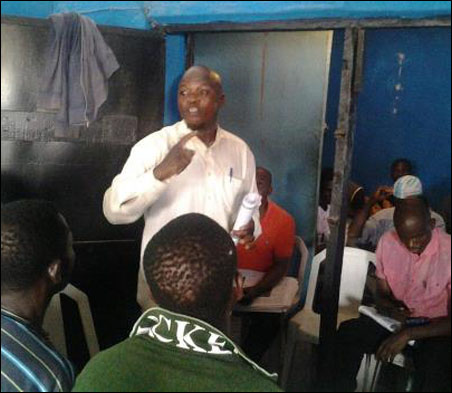 Over a hundred angry okada riders were at a mass meeting on Sunday December 16 called by the Joint Action Front (JAF). Angry and bitter at the judgement of a court which ruled against them last week, the meeting resolved to continue protests and demonstrations against the anti-poor new traffic law of the Lagos State government which restricts the movement of commercial motorcyclists on 475 roads in Lagos.

A new day for mass protests is Wednesday 19 December. Starting from Monday, mobilisation meetings are to be held at the different local government areas across Lagos where the okada riders are located. Also mass leafleting is to be organised in the communities and neighbourhoods.

The DSM is intervening in the mass meetings and protests arguing for a sustained method of struggle. In our leaflets and paper (Socialist Democracy) we argue for the struggle to be linked with the wider need for a mass workers’ party as an alternative to the anti-poor Action Congress of Nigeria (ACN) whose 14 years rule in Lagos has only led to one attack after another on the living standards of workers, students, youths, market women, transport operators and mass misery for the poor in general. As a step in this direction, we put forward the Socialist Party of Nigeria (SPN) as such an alternative party that need to be supported by mass of workers, youth and poor to wrest power from the ACN.

Mass action against the law was flagged off on Monday December 10 at a demo attracting over 3,000. (see OKADA RIDERS PROTEST BAN AND VICTIMISATION http://www.socialistnigeria.org/?p=2084) Police, heavily armed and intent on provoking violence, stopped the protest from marching beyond about 150 metres. From discussions at the mass meeting, it seemed certain that turn out on 19 December would be bigger and possibly unstoppable by the police. Many recognize that if there is a massive turnout, it will be difficult for the police to restrict the march or break it up.

There were talks of effecting a kind of complete work stoppage of all motorcyclists on Wednesday, December 19, to make the protest more effective. If this happens, the impact will be huge because many, including civil servants, rely on motorcycles to go to their workplaces. Also a stewarding committee was set up at the meeting to ensure orderliness of the procession on Wednesday. A fighting fund of N10, 500 was collected to print aprons and other materials for the protest. This is perhaps the first time this layer of the population are turning to organised and collective struggle and yet they have learnt a lot over the past few weeks. There is the general feeling that unity is essential to win the struggle.

The mood at the mass meeting yesterday was not just bitter, but also determined and resolute. This is more so given the palpable anger at the judgement of the Lagos High Court which threw out the case of the okada riders and justified the actions of the government. There is now a general feeling that the institutions of the State cannot be relied on to defend the rights of the commercial motorcyclists and that only their collective struggle can win them concession. This marks an important new stage in the struggle. There is a hardening in the determination of the commercial motorcyclists and the general feeling that “this is a battle for survival, we must win”.

The reality is that the other prospect of not winning portends unimaginable disaster for hundreds of thousands of families of the okada riders. From the 1960s and 1970s when it was just a private means of transportation by civil servants and some sections of the middle class, motorcycle has become a means of mass transportation in Nigeria and a source of living for hundreds of thousands of the riders all over the country. Given the unemployment level in the country, many have no other jobs turn to than commercial motorcycling.

A cursory look at the social character of the okada riders tells you a lot about why this issue is not just as simple as the Lagos State government puts it, rather it is a socio-economic issue, it is a question of livelihood. A sizeable number of the riders are educated graduates of tertiary institutions, overwhelming numbers are youths having no other job prospects while among them are 50 and 60 year olds to whom stopping their operation would mean misery of unimaginable proportions. And they all have families and dependants who rely on proceeds from the business for their daily meals, shelter, upkeep, health care and education.

The argument of the Action Congress of Nigeria (ACN) government is hollow. It wants to modernise Lagos and ensure safety on the roads. To be sure, motorcycle is not a desirable means of transportation in the 21st century, let alone a mass means of transportation that it is in Nigeria! Many limbs, arms and legs have been broken in accidents involving motorcycles. However the only reason motorcycle enjoys so much patronage is because of the chaotic transportation system in Lagos and across the country and bad roads which causes traffic snarl. Many roads in Lagos especially those in the inner communities and neighbourhoods are completely unmotorable, despite 14 years of the Action Congress of Nigeria’s (ACN) government.

Instead of spending two hours in a traffic jam for a distance that should ordinarily take less than 30 minutes drive, many Lagosians and Nigerians who have no cars of their own prefer to ride on motorcycles because they are faster and can navigate efficiently, although not safely, on bad roads and meander through traffic. There have also being instances, when roads are flooded during raining seasons, of car owners, late for work or for an appointment, abandoning their cars on the road and taking motorcycle ride.

Therefore the only real solution is for the government to repair roads and most importantly address more vigorously the problem of traffic congestion by developing a more efficient, modern and public-owned mass transportation system that will include rail transport, metros and water transportation. With a network of metros linking the farthest ends of Lagos together and public-owned jetties/ferries plying the waterways and linking the littoral communities to the main land, it can be possible to decongest the road of hundreds of thousands of vehicles, something which would ease traffic problems considerably. In this case, the use of commercial buses will only be for short distances.

In their propaganda against the okada riders, officials of the government claim Lagos is the only modern city in the world with this huge number of commercial motorcycles, but they forget to add that Lagos is also probably the only city in the world without a metro system and without good roads! Members of the ruling elite don’t care whether the roads are good because they always have the option of moving around in choppers and private jets.

The purpose of the traffic law is not to ensure safety. Safety on roads is basically about a number of rules and infrastructures to ensure compliance. In other parts of the world, traffic laws are enforced through traffic cameras and a few patrol vehicles monitoring road users and speed limits. But here in Lagos, the new traffic law is being enforced by crude police methods. Of course there are no traffic cameras even though Lagos is supposed to be a “mega city”. Motorcyclists spotted on the 475 roads are chased and shot at in broad daylight thereby exposing to danger not just the motorcyclist but also his passenger and passers-by. One motorcyclist was shot dead in such a scenario weeks ago and many have been wounded.

For the okada riders, there seems to be no good choice between the two grim options of either gently stopping for the police when you have obviously flouted the traffic law or running with the danger of being shot at. This is because getting caught means your motorcycle will be impounded unless you are ready to pay as much as N30, 000. This is in a country where the national minimum wage for workers is just N18, 000!

The only other option is to obey the traffic law and not operate on any of the 475 roads. But this will mean a sharp drop in the meagre proceeds of the riders with the implication of further worsening of their living standards. This is because other roads apart from the 475 are inner street roads, many of which stretch only just a few metres, where there is less patronage. Some of these roads are impassable even for a motorcycle because of their bad state.

This is the background to the grim battle for survival which is opening up. Discussions at the mass meetings reveal the radicalisation which is starting among this layer of the people. Many of them immediately see the link between the attack on their livelihoods with other attacks on doctors, increment of fees at the Lagos State University (LASU), destruction of markets, shops and people’s homes carried out by the Lagos State government. It is also not hard for many to draw the conclusion that the ACN is anti-poor and that there is the need to vote them out at the next election. This is striking considering the fact that just over a year ago, Governor Fashola had won re-election through support from sections of the population like okada riders to whom he distributed free crash helmets at campaign rallies.

Unfortunately the absence of an alternative working class political alternative would mean that equally anti-poor parties like the Peoples Democratic Party (PDP) would be the one benefitting from the discrediting of the ACN in Lagos. This is all the more why the left have to intensify work to provide a genuine alternative in Lagos and nationally by 2015. A real party that stands for the workers and poor can excite and get huge support from the mass of people who want to see the ACN out of power come 2015.

This is one of the reasons the DSM has formed the Socialist Party of Nigeria (SPN) – a party which if it comes to power in Lagos State will commit public resources to rebuilding failed road infrastructures, develop alternative means of mass transportation like metros and water transport while ensuring employment for all, a living wage for workers, building of affordable homes to provide shelter for all, free and quality education and an affordable and accessible health care through the revamping of public hospitals and clinics. The ACN could not do any of these for 12 years because they have embraced and are guided by the philosophy of capitalism which puts profit before people’s needs whereas the Socialist Party of Nigeria (SPN) is guided the philosophy of socialism which puts people’s needs first and ahead of any other.