TWO PROTESTERS ARRESTED BY THE POLICE 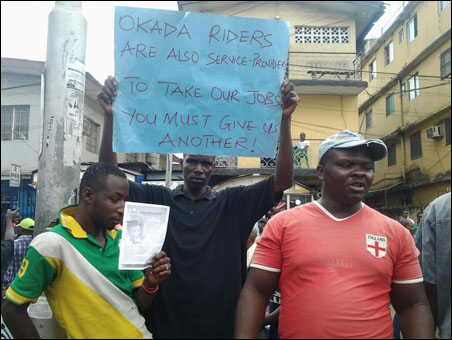 About 3,000 protesters including the operators of commercial motorcycle, popularly called okada riders and members of left organizations affiliated to the Joint Action Front (JAF) marched in Lagos on Monday December 10 against the Schedule 2 of a new Lagos Road traffic law which proscribes the operation of okada riders on 475 roads. The protest is also against the oppression, harassment and extortion of Okada riders by the police and Lagos state agents in the name of enforcement of the law. Before now there had been some pockets of protests especially for a few days after the enforcement of the new Traffic Law began which saw one of okada riders shot to death by the police.

The original plan was for the protest march to take-off from the Nigeria Labour Congress (NLC) office at Yaba to Alausa-Ikeja, where the state government secretariat is located, the seat of power. The march kicked-off by 11am but had only gone just 50 meters when hundreds of armed police blocked the roads and requested the crowd to discontinue the protest. The protesters were only allowed to move additional 100 meters before the police finally stopped the procession. The protesters then returned to the NLC office to continue the protest rally. However, two of the protesters were arrested by the police while distributing leaflets. 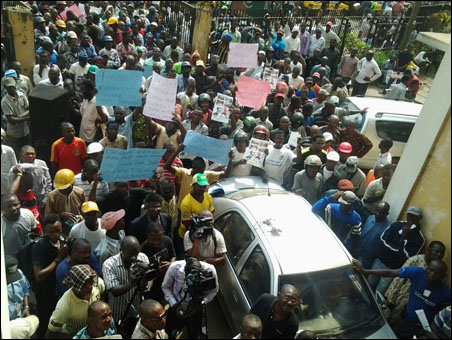 Despite the disruption of the protest march, the okada riders were in high spirit to remain steadfast and resume the protest another day. Some of the placards read thus: “Provide jobs, not misery!”; “We Have the Right to Survival, End the Attacks against the Poor Now!”; “2015: RED CARD to ACN & other Anti-POOR parties!; Police Must End the Brutality and Extortion of Okada Riders Now!”; “Adequate compensation for all destroyed bikes!”; “Build a party that stands for Millions, not for billionaires”, etc. 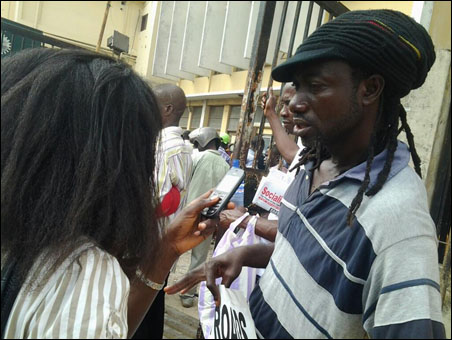 Since the enforcement of the law began in October 2012 the government has unlawfully destroyed several thousands of forcefully seized motorcycles. The Nigeria Police have seized this opportunity to extort huge sums of money from Okada riders before their motorcycles are released. Those who have no money to bail out their motorcycles from police custody either lose them to the Lagos State crushing machine or the Police officers themselves.

The Democratic Socialist Movement (DSM) has been playing very active in the fight back that has developed against this attack. We have so far issued 3 different leaflets so far and a public statement. Apart from participating at several meetings of JAF on the issue, we have held meetings with the commercial motorcyclists including a public meeting in Agege. DSM comrades participated in the protest, selling 120 copies of Socialist Democracy, the DSM’s paper. 3 persons signified interest to join the DSM – one of them a passerby while others are okada riders.

Below is the leaflet circulated at the protest: 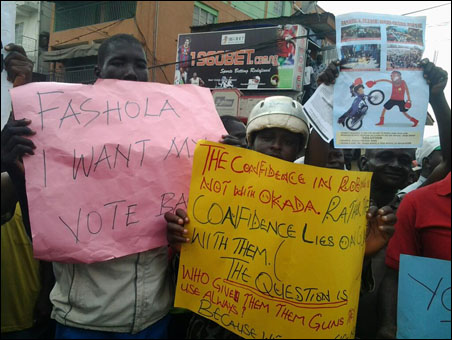 The Democratic Socialist Movement (DSM) and the Socialist Party of Nigeria (SPN) condemn the attack on okada riders’ livelihood. We join Okada riders and Lagosians in solidarity to protest this injustice. 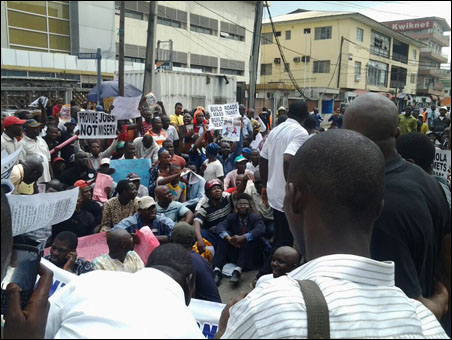 Protests by commercial motorcyclists popularly called Okada riders have broken out in different parts of Lagos and are still ongoing after the enforcement of the state’s new traffic law started and the brutality of Okada riders by Policemen. Several thousands of the motorcycles have been impounded while over 5,000 of them have been cruelly destroyed by the state government. We condemn this brutality and demand the release of all motorcycles seized by the Nigeria Police and the Lagos State Government. We also demand adequate compensation to be paid for the ones destroyed. 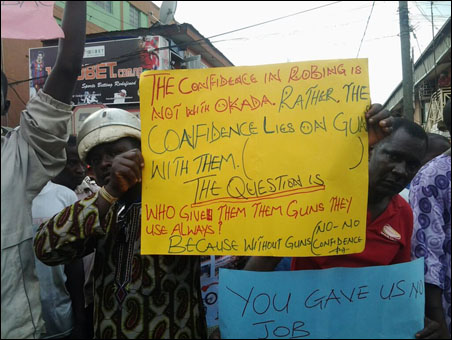 Though, the traffic law also has provisions that regulate the use of vehicles and conducts of drivers, the Okada riders are the worst hit. The law, among other things, bans the operation of Okada in about 475 roads and restricts their movement to between 6am to 8pm. They are also not allowed to carry children of school age and pregnant women. Some of the roads where the Okada operation has been banned are not plied by the commercial vehicles as a result of their poor conditions. Hence, commuters are forced, in some cases, to trek long distances. For instance, the law bans Okada from operating in 475 roads across the state, making it impossible for the riders to earn a living. Technically, the restriction is a calculated attempt to ban commercial motorcycling in the Lagos State because movement mostly from one point to another are linked by these 475 roads while virtually all petrol stations are cited on these banned roads, making it difficult to refuel.

The law is essentially part of the anti-poor policies and conducts of the ACN government in Lagos state which have already seen the demolition of Makoko, demolition of several markets, outrageous hike in fees at the Lagos State University (LASU), the mass sack of 788 doctors in May 2012 which was later reversed by mass struggle, the brutalisation of Lekki residents for protesting the exploitative tolling policy, the mass arrest, detention and banishing of street beggars, demolition many houses without adequate compensation etc. 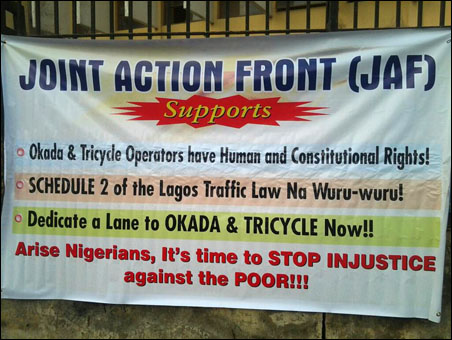 The major roads are also littered with potholes and bad portions which slow down the traffic movement and thereby force many people to opt for Okada, which can easily maneuver bad portions to get to their destination on time. Instead of addressing the underlying problems, the law for instance, bans Okada from carrying pregnant women or children of school ages. How does the government expect expectant mothers living in the communities not plied by commercial vehicles as a result of the deplorable conditions of the road or don’t have cars of their own get to hospital or transport children to school? Also outlandish is the provision that bans operation of Okada after 8pm in a state where many communities can only be accessed by okada. 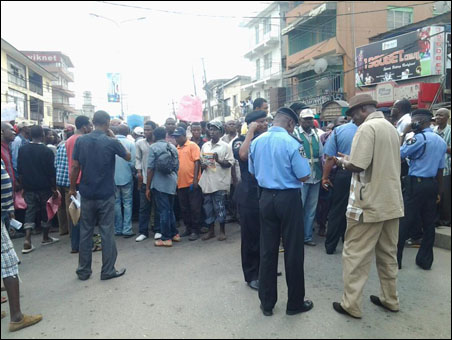 There are two major factors that led to the Okada phenomenon; firstly, more communities springing up in the last 30 years with roads that are not motorable, secondly, roads built decades ago degenerated without any maintenance. This is compounded by growing population and weak transport system. Contrary to this objective situation, the ruling class tries to make it look like an isolated issue. The mere fact that commercial biking is patronized by millions of Nigerians makes it a socio-economic issue that could not be wished away by fiat. Yes, commercial motorcycling is not ideal means of public transportation, in fact, it is a crude and backward means of public transportation. Addressing this backwardness can only be possible through rebuilding of infrastructure, creating mass employment, upgrading the skill of the workforce etc. 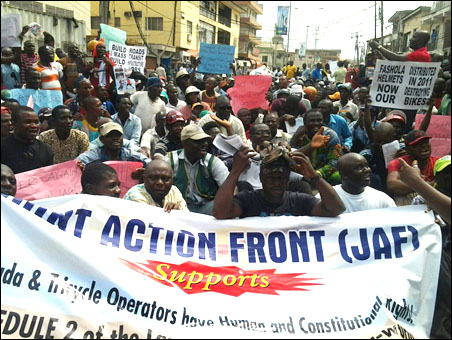 What is required to holistically phase out the use of Okada as a means of mass transportation in a mega state of about 18 million people is an integrated public transportation system that ensure that all major roads between the local governments and within the communities are properly paved with suitable drainage. In addition to reliance on road transportation is the urgent need to develop a master plan for mass rail and water ways transportation. This is the only practical way to develop needed infrastructure and generate employment for the teeming population of hapless Okada riders. Instead of having this kind of vision, the ACN politicians only set out for making life more difficult for the poor. Just imagine, to ride Okada without helmet attracts a fine of N20,000! This, for a state government that has not fully implemented the paltry N18,000 stipulated minimum wage for a worker, is a graphic pointer of how anti-poor the ACN is. 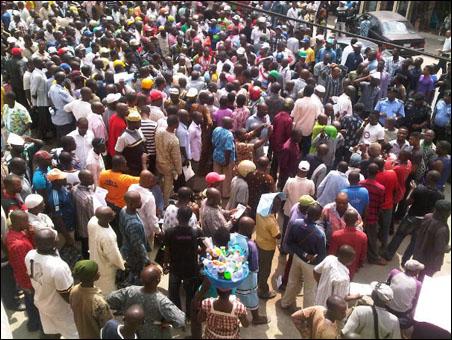 Using public works with massive government investment and democratic control by workers, relevant professionals and communities would eradicate corrupt practices, inefficiencies and ensure cost efficient construction and qualitative maintenance of roads including in the communities. This method of building and maintaining all roads will give gainful employment to many including some Okada riders. Aside road construction, a public funded and democratically managed mass transport scheme would also guarantee the much needed gainful employment. But this is not an option for the ACN government which, like other big business, profit-first political parties (PDP, ANPP etc.), employs contract system designed to deploy public resources to gratify the self-serving interests of politicians and their business associates. 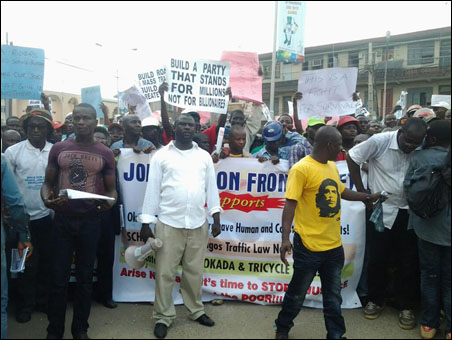 The Fashola-led ACN government is anti-poor and deceptive. The party which is today hurling Okada riders out of the roads, just in 2011 distributed thousands of free helmets and other gift items to Okada riders ahead of the general election in order to woo votes. In the usual ‘use and dump’ tactics of the ACN like other pro-rich political parties (PDP, ANPP, APGA etc.), the people do not count but only needed to climb to power. 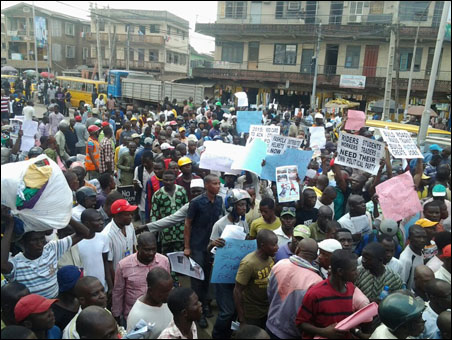 This attack also affects the majority of the Lagos populace who commute daily around Lagos through commercial motorcycles. We call on workers, youths, artisans, traders and the poor in general to join the Okada riders in the struggle to defeat this anti-poor policy. It is time the masses stand as a united force against Fashola’s onslaught. We call on all genuine Okada associations to unite for joint action and mobilize their ranks and commuters for more mass meetings, rallies, protests demonstrations as a means of defeating this government and its anti-poor policies. We also call on the Okada riders and the working masses to join the Democratic Socialist Movement (DSM) and Socialist Party of Nigeria (SPN) as a means to democratically build a genuine socialist alternative to this exploitative, corrupt and anti-poor capitalist system. 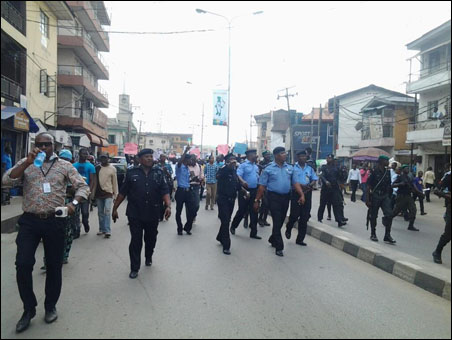 JOIN THE STRUGGLE TO LIBERATE THE MASSES FROM FASHOLA, ACN AND OTHER ANTI-POOR POLITICAL PARTIES 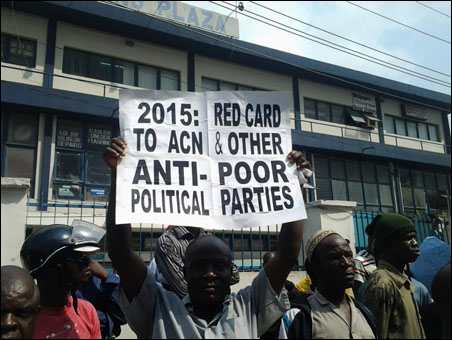 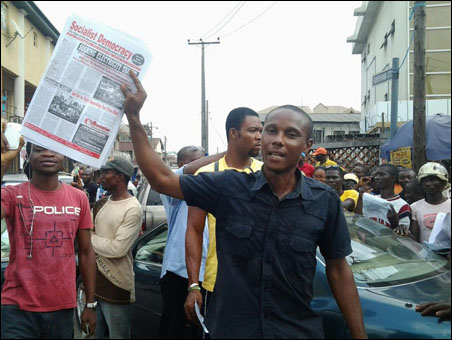