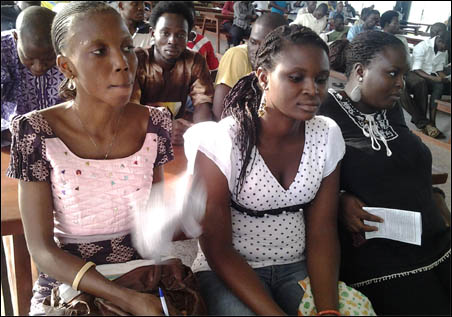 The situation at the Obafemi Awolowo University (OAU) is sharpening towards a mass students’ revolt against the University authorities over a number of issues chief of which are the continuous ban of the Students entents Union and the poor welfare conditions. With two protests within three days and a symposium in between, definitely a new period of struggle is fast opening up – one that may see the management unable to sustain its proscription of the union much longer.

Nearly two years ago, the University’s Students Union was proscribed by the immediate past Vice Chancellor Prof. Michael Faborode after a peaceful protest against fee hike. However shortly afterwards his tenure elapsed and he was replaced by a new Vice Chancellor Prof. Tale Omole whose immediate promise to restore the Union bought him a brief honeymoon with students.

Almost right from the beginning of his tenure, the V.C started a series of process to foster the believe he was going fulfil his promise. Faculty congresses were called. Some unelected students were put together in a form of care-taker committee with which the management maintained a semblance of communicating with student leaders. Infact attempts were made to rewrite the union constitution while new undemocratic rules and requirements for contest in union elections were drawn up. Despite the undemocratic nature of all these steps which the Democratic Socialist Movement (DSM) opposed as attempts to restore a pliant union, many students would not have minded if it would eventually lead to the restoration of the union.

Highlighting this new situation which is still developing is the succesful symposium of the Education Rights Campaign (ERC) which held on Saturday 1st December 2012 at the Awolowo hall cafe. The ERC is a platform formed by the DSM to campaign for free, public-funded and democratically-managed education.

A day before the symposium, about a thousand students had responded to a call for a protest against cut in power supply. Despite that the University is spending millions currently on different activities to celebrate its 50th anniversary and would spend many more to host the forthcoming National University Games (NUGA), students hostels and academic areas are left in pitch darkness when there is no electricity supply from the Power Holding Company of Nigeria (PHCN). According to the Dean of Students Affairs, students do not pay enough for the management to fuel the University’s generators. However, seeing a protest at their doorsteps, they somehow materialized fuel for the generator. This has now taught students that struggle pays.

About 300 attended the ERC symposium. This is perhaps the biggest turnout at symposium in recent times. Speaking at the symposium were several activists drawn from the labour and student movement. Adeola Soetan (former president of OAU Students union) was the main speaker. He called on students to organize and fight for their union. He went into memory lane drawing from his experience as a former union leader to encourage the students. Also speaking was Alfred Adegoke (Coordinator DSM Osun state) who spoke on the Nigerian situation, the need for a mass workers party and a socialist revolution.

Dr. Ife Adewunmi (former ASUU chairman) challenged students to conquer their fear. This struck a chord with the students because about a week to the symposium some activists on the campus including our comrades were invited to a meeting where they were tongue-lashed and threatened with expulsion and suspension by the Vice Chancellor if they continue to raise demands for the restoration of the union. Other activists who spoke are Dr. Ajila (former Vice President of the Union), Demola Yaya (first elected NANS Zone D coordinator in 1994), Monsuru (current NANS Zone D coordinator), Akinola Saburi (a past president of the union), H.T Soweto (ERC National Coordinator), Ibraheem Kola (DSM Secretary Osun State) and Kunle Ajayi of the Socialist Youth League (SYL). By the end of the discussion 18 copies of the DSM’s paper, Socialist democracy, had been sold and 10 people expressed interest in joining the DSM.

However at the end of the symposium which ended late in the night, some of the speakers (Adeola Soetan, Demola Yaya, Hassan Taiwo Soweto and Kola Ibrahim) were attacked by security men at the university gate while going to town to sleep. The pretext for this attack was that they were leaving the University after the gate had been closed for the day. This in a University where over 60% of the student population stay in town because of inadequate hostel accomodation!

The reality is that this is not the whole reason. The management is obviously irked by the success of the symposium and the prospect of a revival of struggle on campus. Indeed the whole attack has raised on the campus the suspicion of a premediated plan of the management to continue to foster a mood of fear among students so they would never be able to fight collectively for their rights.

However rather than cow students, the attack has only succeeded in unleashing a spontaneous movement. After students mobilised to rescue the speakers from the security men who wanted to detain them, they then embarked on protests which went on throughout the night with barricades set up and chants of “we want our union” renting the air. Two congresses have been convened. One held in the middle of the night during the spontaneous protests and a “struggle coordinating committee in which our comrades are playing a role was set up. The committee called another congress yesterday Sunday at which a lecture boycott was discussed and fixed for Wednesday December 5 2012.

Members of the University management are confused at the turn of event. A statement issued yesterday from the management pledged commitment to restoring the union but it does not say when. But many students wants their union back this session. Many also correctly fear that the ploy of the management, much like what is happening at the University of Lagos (UNILAG) now, is to continue delaying for years so that the generations that knew the students union and its historical radicalism would have graduated.

Currently now, activists are busy mobilising for the lecture boycott. The DSM fully supports this renewed movement to fight for the restoration of the Union. We call for mass support for the boycott as well as the solidarity of the University workers and their unions.

Alongside standing for a democratic and independent union capable of providing a challenge to government’s neo-liberal and capitalist education policies the DSM is proposing the following demands for the growing movement:

1) Immediate restoration of the students union. Name the date for union elections now!

2) Halt to management attempts to arbitrarily review the union constitution, using of CGPA as basis for contest in union elections and all other undemocratic interference of the management in the running of student affairs

3) Provision of adequate welfare including regular supply of light and water and a crash program to upgrade hostel and teaching facilities including lecture theatres, library and laboratory 4) No to plans to hike fees next academic session