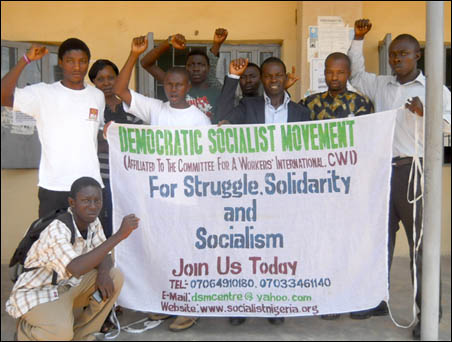 “The DSM is not happy with the way things are going in the country, while majority are suffering amid abundance, a few people have cornered the country’s wealth… The September 26 riots that occurred last year on the campus broke out as a result of students’ frustration with the state of things… We need a united action in an organised manner to table and fight for the demands of the students… Change-seeking students should join the DSM. As socialists, the DSM will continue to campaign for democratic rights of the working people and the students, and the need for a socialist alternative”.

With this tone, the symposium of the Democratic Socialist Movement (DSM) Federal Polytechnic Bida branch kicked off. It held on Saturday October 20 at the LH1 hall. About 50 students were in attendance. The polytechnic is located in Niger State, North Central Nigeria.

Three leading members of the Polytechnics’ staff unions also spoke at the symposium. The debate was very lively and it provided an opportunity for us to argue on the need for a new party that represents the working class and poor.

The DSM branch secretary, comrade Ayo Omole, spoke about the situation of the campus and the role Nigerian students need to play by fighting back. He decried the bad welfare conditions on the campus and how students are suffering while the students’ union leaders are not doing anything to rescue the situation. He urged students to join the organisation and participate in all is activities. The programme organiser of the branch, Adebayo Tunji, also spoke about the socialist ideas of the DSM and our call for a working class political alternative.

There were solidarity speeches from students and staff union activists. The former students’ union president of the institution Mr. Ameme in his solidarity speech commended the DSM for organising a symposium and for being at the forefront of the struggle for a better society.

A lecturer at the Polytechnic, Mr Theophilius Danjuma spoke about the rising incidence of mass failure which is a product of the collapse of public education.

One of the highlights of the symposium was the speech of the chairman of Senior Staff Association of Polytechnic (SSANIP) Bida branch, Kudu Aliyu, who has been actively sympathetic to the ideas and work of the branch. He spoke on “good governance as a prerequisite to national peace and development”. Interestingly he identified inequality between the rich and poor, unemployment, corruption and exclusion as the fundamental causes of violence and insecurity in Nigeria.

This is something the DSM also believes but we go further by arguing for the revolutionary overthrow of the corrupt capitalist ruling class and the enthronement of a democratic working class government armed with socialist policies as the only way to begin to build a new Nigeria where inequality, violence and insecurity can be thing of the past.

Speaking in the same vein, the chairman of the Academic Staff Union of Polytechnic (ASUP) Bida branch, Nda Umaru, also commended the DSM for the symposium. He however identified leadership as the major problem of Nigeria.

Comrade Dimeji Macaulay (DSM member) spoke on the capitalist economic crisis in the world, Eurozone and the Arab spring. Capitalism is in crisis all over the world and the poor working people are being asked to pay for it. Here in Nigeria, we have see that the government and all the political parties basically stand for the same thing: brutal cuts in social spending, privatization and all other anti-poor and pro-rich capitalist policies which are only benefiting a few while driving greater masses if people into poverty. He spoke about attacks on public education most especially the Oronsaye committee report which is recommending introduction of tuition fee up to between N450, 000 to N525, 000.

Reacting to the ASUP chairman’s argument that leadership is the major problem of Nigeria, Dimeji said while leadership is of course a problem, the capitalist system is the real culprit. Nigeria cannot move forward from where it is today under this anti-poor capitalist system. There can be no peace and meaningful development under the present capitalist system. Neither can there be a good leadership for the country so far the exploitative system of capitalism remains unchanged.

That is while the DSM has formed the Socialist Party of Nigeria (SPN). “The aim of this party is to stand for the workers, poor and the youths. The party will be a fighting party that will support workers’ struggle for a better life and students’ struggle for public funded education. The party will also participate in elections with working class candidates that campaign on socialist programmes and policies. The general strike and mass protest in January against the unjust removal of fuel subsidy shows that Nigerian are prepared to fight for change. What is missing is a political party of the workers and poor masses to provide the leadership and programmes to take power”.

The symposium ended in the early afternoon with 13 students asking to join the DSM. An impressive sum of N5000 was raised as fighting fund aside some pledges. These contributions will help in no small measure our work and campaigns within the campus and Bida community.