At this critical point in time when government at all levels is hell-bent at intensifying attacks on public education and thereby making education an exclusive preserve of the rich, the Democratic Socialist Movement (DSM) Obafemi Awolowo University (OAU) branch organized a public symposium with a view to sensitizing students as well as the general public on the need for an organised fight back.

The situation on the University campus is hardly exciting. After 2 years of proscription of the Students union, the generality of students are reeling from a welfare condition that has sharply gone from bad to worse over the last one year. Basic supply of water and light to hostels and academic areas are no longer guaranteed. Lacking a platform to fight back, most students are largely apathetic.

In spite of this, over 70 students gathered in the Awolowo hall cafeteria â€“ the venue of the symposium â€“ to listen to the speakers and participate in the discussion. In attendance too were five members of the DSM from Oyo State. 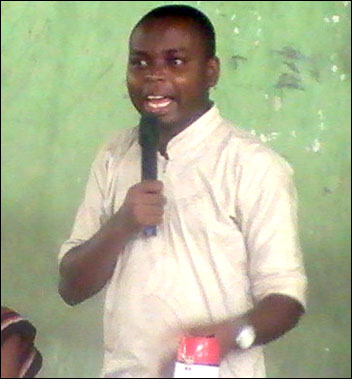 Leading the discussion, Kola Ibrahim (Secretary of the DSM in Osun State) spoke on the on-going privatization of electricity. This is an attempt to hand over the fate of millions of Nigerians and indeed the Nigerian economy to the profit-oriented caprices of a handful of big businesses and imperialism. Asides that is the fact that the policy will deny a vast majority of Nigerians the access to electricity as distribution to communities will be profit driven and at the discretion of the corporation.

The only way Nigerian citizens can be assured of regular and affordable power supply is by nationalizing the power sector and placing it under the democratic control and management of the workers, professionals and communities.

Given the attack on independent unionism in the university, it was natural that the issue that gripped students’ attention the most was the plan of the management to restore the union which is looking more and more like a scheme to bring in a pliant Students’ Union through the back door. What with the plans of the Management to rewrite the union constitution and make academic qualifications the requirement for contest in Students’ Union elections.

As Dr. Kehinde Ajilake (financial secretary of the Academic Staff Union of Universities (ASUU), OAU chapter) pointed out, the only reason the University authorities are talking of restoring the union is because of the need to set up a budget monitoring committee (one of the aspects of FGN/ASUU 2009 agreement) which must have a representative of the Students’ Union as well as staff unions. According to her, were it not for this the University authorities would not be interested in restoring the union because of its fears of the potency of an organized studentry.

Speaking in the same vein the branch secretary, Odunayo Eniayekan who also moderated the discussion condemned the undemocratic process through which the university administration wants to restore the union. The attempt of the administration to impose a new constitution on students as well as use certain CGPA and spurious requirements for electoral contest was condemned as an attack on the democratic rights of students. Students have to organize and begin to agitate for an immediate general congress to oppose this attempt and deliberate modalities for the union restoration in line with the democratic tenets and principles of independent unionism.

Abbey Trotsky (DSM Coordinator, Oyo State Chapter) spoke on the mass poverty and misery vast majority of Nigerians are being subjected to despite the huge wealth and resources at the disposal of government at all levels. A staggering sum of 3 billion dollars is realized from sales of crude oil per day. This only reveals a fraction of the unprecedented oil wealth receipt of the country which has yet not translated into transformation of the lives of vast majority of its citizens. A recent survey of the National Bureau of Statistics has it that over 70% of Nigerians are living below poverty line ($2 per day).

He called for a mass political alternative of the working class and poor to wrest power from the current thieving capitalist ruling elites. He therefore called on the mass of students, workers, youths and the poor to join the Socialist Party of Nigeria (SPN) â€“ initiated by the DSM – as a means towards building a mass political alternative that can put an end to the gross inequality enthroned by the exploitative capitalist system.

Soweto, the National Coordinator of the Education Rights Campaign (ERC), introduced the new campaign against fee hike and education under funding. He called for mass action against the Oronsaye committee report whose recommendation would mean an introduction of tuition fee ranging from N450, 000-N525, 000. This would have serious negative implications for Nigerian students as well as their poor working class parents.

It would lead to mass drop out and layoff of staff as several departments and faculties would have to be scrapped due to the low turnout of students/applicants. This is the disaster looming at the Lagos State University today where fees have been hiked to between N100, 000 to N348, 750! There is urgent need for an organized national resistance against this attack on public education.

To stop these attacks, the ERC is calling for days of actions including coordinated lecture boycotts and mass protests to demand adequate funding of education and reversal of all hiked fees. This is one of the central points of the new campaign. Leaflets and posters have been produced to be circulated around campuses urging activists, Students’ Unions and the National Association of Nigerian Students (NANS) to begin mobilization for such nationally coordinated mass actions. The campaign is also urging for solidarity from staff unions and education workers.

In the course of the debate, 18 students chose to join the DSM. Five, four of whom were female, attended the branch meeting the following day. We also sold 5 copies of the Socialist Democracy (SD). These modest gains again show the potential for building a revolutionary organization on campuses despite the ebb in students’ struggle.

In OAU where radical ideas have been under authorities’ sponsored attacks over the last three years, this modest success is a big encouragement and points to the possibility of our ideas acquiring a mass force. We intend to double our efforts at consolidating on the contacts, making new ones and building the branch ideologically and politically especially through the on-going campaign for restoration of an independent union and against education under funding.