The Life and Legacy of Fela: His Message and Lesson for the Oppressed 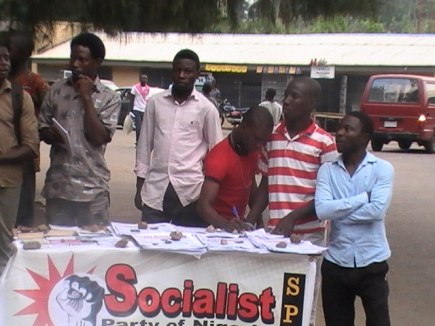 On Friday, 31st August, 2012, the University of Ibadan (UI) branch of Democratic Socialist Movement (DSM) held a public symposium tagged FELABRATION 2012 with the theme: The Life and Legacy of Fela, His Message and Lesson for the Oppressed. The venue was the Block B basement of the popular Nnamdi Azikwe hall of residence in the university.

This public meeting being held after about 7 years of a period of a relative political inactivity among students as a result of the brutal clampdown and attacks unleashed on the students’ union and left organizations on campus by the management was part of the efforts by the branch to raise political awareness among students and win workers and students to socialist ideas. 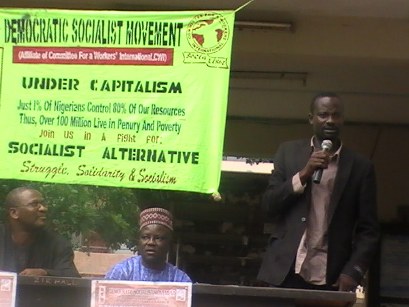 While declaring the symposium open, Abbey Trotsky, the Secretary, Oyo State chapter of DSM, who chaired the occasion, clarified that, the programme was not meant to debate whether Fela Anikulapo was a Marxist or not but to highlight certain political lessons from his songs and their continued relevance to the struggle of workers, youths and entire working people for a better society today.

Speaking on the theme of the event, Dr `Sola Olorunyomi maintained that one thing that cannot be taken away from Fela Anikulapo music is its consistent defense of both the political and economic interest and aspiration of the working people. After citing some of Fela songs to back-up this claim, he called on students to join DSM and its programme in upholding Fela legacy toward a socialist transformation of Nigeria.

On his own part, Dr Segun Ajiboye, described Fela songs as songs for freedom, justice and equality. Among other examples, he cited how Fela in one of his songs opposed Apartheid policy in South Africa. He made this reference to collaborate the point that Fela message was not restricted to the shore of Nigeria alone. He also used the occasion to condemn the recent plan by the federal government to print a single N5000 note as inhuman, callous and anti-people. Dr Ajiboye also called on students to join DSM in its campaign to resist all attacks on working people. 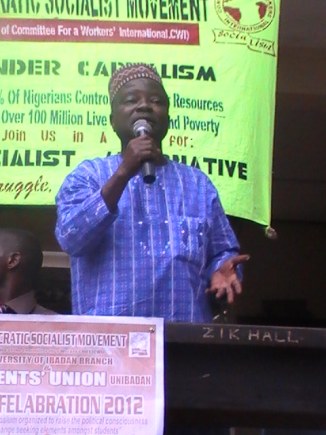 In a similar vain, Barrister Afred Adegoke, employed some of the Fela`s songs to lampoon the level of corruption and looting in public sectors particularly the oil industry. He described the recent plan of CBN and government to print the new N5000 single note with 40billion naira as a graphic continuation of the corruption and looting of public treasury. Barrister Adegoke further described the infrastructural decay and chronic state of public social services like education, health among others as off-shoot of various anti-poor neoliberal capitalist policies of thieving government at all levels. He therefore called on students to join DSM as well as SPN with the view to collectively build it as formidable platforms through which students, workers, artisans and all oppressed strata of the society can be organized toward a socialist transformation of Nigeria.

The most interesting part of the symposium came when Comrade Segun Sango joined the discussion. Sango described Fela not only as a freedom fighter but also as a human right activist whose death in 1997 was a huge loss to the entire working, but suffering, Nigerian masses. He painted the gloomy, but real picture of the appalling state of Nigeria’s economy and blamed the capitalist government across the country regardless of political parties and their imperialist master for various socio-economic crises confronting the Nigeria working masses. He therefore emphasized on the urgent need for a formidable political alternative which could begin to set the country on the path of socio-economic development and use the resources of the society for the benefit of all while in power.

Sango informed the public meeting of the DSM initiative of forming SPN and the need for students, workers and all oppressed strata to join DSM in building this party as a working people political platform to wrest political power and begin to reconstruct the society in a socialist direction in which the collective resources of the society will be nationalized and placed under the democratic control and management of the working people.

In his own contribution Hassan Taiwo Soweto decried the rotten state of Nigeria educational system. In the midst of these enormous education crisis, Soweto informed the meeting of the recommendation of Stephen Oransanye â€“ led committee which, if implemented, will definitely compound the attacks on the Nigeria students. He therefore concluded that only independent students’ mass actions with support of working class organisations can defeat this looming attack on public education.

It is important to remark that the event was not just cut and dried political speech making alone. There was a lot of entertainment. Before the commencement of the programme, there was an Aluta gyration led by comrade Ola Jimoh, the Secretary, DSM-UI branch. At the same time, audience were entertained with various melodious and inspirational Fela`s songs at intervals as speakers made their speeches.

There was also solidarity message given by the Nnamdi Azikwe hall Chairman. In the message, he openly commended the initiative and courage of DSM comrades for organizing the political symposium and promised the audience that the Zik hall would return to the tradition of fortnight moonlight political discussion. This, he said, was one of the ways the foundation of political awareness the DSM’s symposium has been able to establish can be sustained and build upon.

In all over 150 students including the President of the Students Union as well as some university workers were in the attendance.

At the end of the public meeting 21 students across various halls of residence within the university put down their names to join DSM and its activities. 12 of these attended the DSM meeting that held immediately after the programme. 7 copies of Socialist Democracy (SD) were sold.