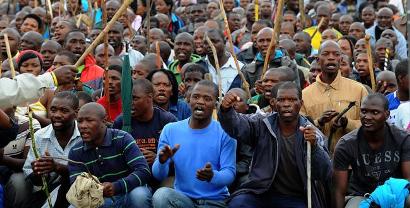 In the face of widespread anger, the National Prosecuting Authority (NPA) has been forced to drop the murder charges against the 270 miners arrested after the 16 August Marikana massacre and to release them. After repeated bail hearing postponements because of abuse of process by the NPA in bringing the accused miners to court in drips and drabs, violating their rights to due process, lawyers representing the arrested mine workers’ rights issued an ultimatum to Zuma to release the mineworkers by Sunday or face high court action. 170 miners will be released today. The NPA had already decided to lay charges of public violence, possession of dangerous weapons, possession of arms and ammunition as well as for an illegal gathering.

The murder and attempted murder charges were the fuse that detonated a volcano of rage across the country producing splits within the ANC itself. Backed by ANC Parliamentary Chief Whip Mathole Motshekga, Justice Minister, Jeff Radebe, demanded an explanation from the NPA saying “he had no doubt that the NPA’s decision had induced a sense of shock, panic and confusion” amongst the public (Sunday Independent 02/0-9/12).

ANC Treasurer General, Matthews Phosa, who had previously warned that mass unemployment particularly amongst the youth, contained the ingredients for SA’s own “Arab Spring”, weighed in with a stinging attack on the NPA saying, “Charging some of the role players ahead of a commission of inquiry, is contrary to the sub judice rule, reckless, incongruous and almost absurd â€“ the consequences whereof are too ghastly to contemplate. We don’t need another Marikana.”

Apart from the legal absurdity of the charges, which has further inflamed anger is the fact that the doctrine of common purpose is the same legal weapon the apartheid regime used against the anti-apartheid struggle. So outrageous was this decision to charge the survivors with the murder of those mowed down by the police live on television that even the Cosatu leadership, whose reaction to the massacre had hitherto been a cowardly adaption to the pressure from the discredited National Union of Mineworkers’ attempt to save face, was obliged to condemn the decision.

That such a decision could even have been contemplated is an indication of just how far to the right the ANC government has been driven under Zuma. It was the NPA after all that ensured Zuma did not go follow his benefactor into jail for corruption by dropping charges on a spurious technicality in 2009. The NPA’s action comes barely weeks after the NPA removed a prosecutor who resisted pressure to drop corruption charges against two leading ANC figures in Kwa Zulu Natal â€“ the heartland of Zuma support. The NPA in fact has no head â€“ Zuma’ appointee, Menzi Simelane, having been removed after the Supreme Court of Appeals found that he was not a “fit and proper” to lead the NPA and that therefore his appointment was unconstitutional. In concert with a senior police official who stated that none of the arrested workers would ever be allowed to work at Lonmin again, the NPA action demonstrates the extent to which institutions of state under the ANC have acted as the private security agencies of the mining bosses — exposing the role of the state machine under capitalism.

Even more shocking is the mounting evidence of what had been clear from the onset: that the massacre was premeditated. The poisonous propaganda cloud that was released by the police, sections of the media, and the NUM immediately after the massacre to the effect that the police fired at the workers in self-defence is beginning to dissipate as reports indicate that many of the workers were shot in the back as they were fleeing.

The Sunday paper City Press (02/09/12) visited the scene of the massacre accompanied by Pulitzer Prize-winning journalist, Greg Marinovich, who had first broken the news that there had been two theatres of battle. It found evidence supporting claims by survivors of the massacre that at least 14 bodies were found 300m away from Wonderkop — the scene of the massacre that was filmed by television cameras — at a place locals call Small Koppie. City Press had taken evidence they had found there to the Independent Police Investigative Directorate (Ipid) forcing its investigators to return to the scene. They found spent R1 rifle cartridges, police markers where bodies had fallen, blood markings and what appeared to be attempts to cover up the evidence. Workers told City Press that the workers at Small Koppie had fled there from the police but had been pursued by police and that armoured vehicles had crushed fleeing workers.

Located several hundred metres away from the mine itself, and some distance from the nearest settlement, the workers gathered at Wonderkop posed no threat of any kind to the mine or to the settlement where many of them lived. The workers had armed themselves and retreated to Wonderkop not as an act of aggression but of self-defence following the killings in the mines that had already claimed 10 lives as mine management security and the NUM collaborated in an attempt to break a strike which had been called independently by the workers.

Workers told the DSM that the strike had been led by an independent committee formed by the workers themselves following the NUM’s refusal to support the workers’ demands. This is confirmed by the stance taken by NUM general secretary, Frans Baleni, who earns R100 000 a month, denouncing the R12 500 a month demand by the workers as unreasonable. The workers told the DSM that when they approached the NUM office at the mine to discuss united action, the delegation was shot at killing two members of the committee. The mine management has a long bloody history of brutality towards workers in the mines who have the impertinence to try and break the chains of their oppression and exploitation. This was the basis for the decision to occupy the Wonderkop Hill.

The fact that the state deployed not the Riot Police, but the South African Police Service Tactical Response Team armed with automatic R1 rifles, several armoured vehicles and razor wire indicates clearly that the massacre was premeditated.

The ANC’s reaction to these events is a study of incomprehension and callous indifference. It has yet to issue a statement condemning the massacre. Newly appointed Police Commissioner, General Riah Phiyega told the police after the massacre that the “safety of the public is non-negotiable. Don’t be sorry over what happened.” Minerals and Energy Minister, Susan Shabangu, taking refuge behind the “independence” â€“ something they routinely ignore — of the prosecuting authority rejected calls for the miners to be released. In the immediate aftermath of the massacre, she initially refused to invite the rival union, Association of Mining and Construction Union (AMCU) to talks to restart negotiations on the workers’ demand.

As expelled ANC Youth League president, Julius Malema, pointed out on radio this morning (Khaya FM), for a full 48 hours not a single ANC leader set foot in the area. Zuma himself, forced to cut short his visit to Mozambique as a result of the massacre, initially entered the area under cover of darkness as Malema pointed out, visiting only the injured in hospital, but not addressing the workers on the hill themselves. When he eventually could no longer justify his absence, the workers condemned Zuma’s failure to act with the urgency the situation demanded. Even when he announced the setting up of the Commission of Inquiry, Zuma made it clear he will not apportion blame â€“ this from a president portrayed as the voice of the poor leading a party that claims rather clumsily to have a “working class bias” and strives to be a “disciplined force of the left”.

The ANC is already bleeding, damaged by the deepening economic crisis, deep inequalities, the accumulating social problems of mass unemployment, crime, corruption, and the extreme embarrassment of not being able to deliver text books to state schools in several provinces more than three quarters into the school year, aggravated by faction fighting as the succession battle for the presidency leads to the ANC’s implosion. The insult of the common purpose charges, in spite of being dropped, has added to the deep political injury of the ANC has suffered at Marikana which claimed the real lives of the over 34 workers but resulted in the ANC dying just a little more as well.

Now into their fourth week on strike, the Lonmin workers are standing firm in the face of enormous pressure to return to work. The Ministers of Labour, Minerals and Energy, the Commission for Conciliation Mediation and Arbitration and the SA Council of Churches are all involved in trying to persuade parties to sign a Peace Accord. AMCU has rejected this saying they are not at war with the NUM. They want negotiations on the workers’ demands to be the focus of mediation efforts.

In the meantime, inspired by the resistance of the Marikana miners, the platinum mine revolt in the words of Business Day, has shifted to the gold sector, with 12,500 mine workers at Goldfield’s Kloof Driefontein complex downing tools illegally last Wednesday.

These events pose a challenge to the organised working class as well. Cosatu’s silence before the Marikana massacre, induced by a reluctance to denounce the reactionary role played by its biggest affiliate, the NUM, merely served to embolden management. Had Cosatu come out in support of the workers’ demands before the event, and had prepared to mobilise solidarity action, it is ruled out that the Lonmin management and the police would have dared to act in the savage manner they did. Cosatu’s weakness invited the aggression of the bosses, the government and the state.

A line in the sand has been drawn by the bloodied bones of the martyrs of Marikana. Beyond this lies the disintegration of the ANC and the tripartite alliance on the one hand and the enormous possibilities, as the experience of the DSM’s intervention in Rustenburg, which preceded the events at Marikana, show, for the growth of socialist ideas and for support for the establishment of a mass workers party on a socialist programme.