“This is not our government” 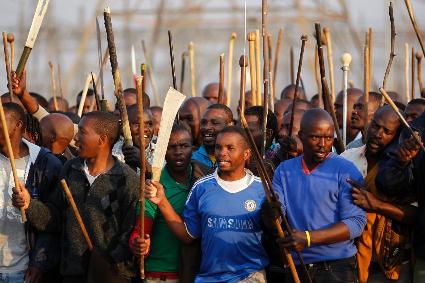 As we publish these reports from Democratic Socialist Movement (DSM – CWI in South Africa, a sister organisation to the DSM in Nigeria) activists on the ground, reports are coming in of a spreading of the miners’ struggle, with a dispute of similar characteristics and demands having broken out at Anglo Platinum mines, in the same area. Workers are in rebellion against the NUM representatives, and have set up committees to control the struggle from below. More reports and analysis to follow soon on both www.socialistnigeria.org and www.socialistworld.net

At 7 AM on Monday August 20, 10 000 striking Lonmin workers and Marikana community members gathered for a mass meeting in the fields outside the hostels and slums where they live. Presided over by what remains, after Thursday’s shooting left 34 workers dead and 78 wounded and hospitalised, while 259 have been arrested (all according to police figures), of the strike committee, the mass discussed the meaning of the massacre, Lonmin’s refusal to negotiate, the media’s distortion of events, how to deal with strike breaking, and how to locate and bury the bodies of the dead. The company’s ultimatum to return to work the same day or face dismissal was furiously rejected.

Lonmin claimed on Tuesday that a third of its 28 000 workforce had gone back to work. Despite this the mood among the workers remains determined and defiant. Workers reported on Monday that those who were returning to work were taken back to the shafts forcefully by the police.

During the weekend, workers had withdrawn from the “mountain” where they had gathered up until then. The area was quiet and people appeared nervous and on guard. Police and mine security guards were posted at checkpoints all over the area, with heavy armoured vehicles, rifles and machine guns blocking access to the mine. A ministerial task team appointed to deal with the situation did not dare to set foot in Marikana as planned on Monday.

Julius Malema, the former African National Congress Youth League (ANCYL) who was recently expelled from the ANC, on the other hand, addressed a mass meeting on Saturday. His Friends of the Youth League-outfit has also arranged the lawyer representing the 259 workers who appeared in court on Monday, on a number of charges including murder and is threatening to sue the police officers involved in the shooting. He launched scathing attacks on President Zuma and the hated National Union of Mine workers (NUM) (where the leadership is part of the Zuma faction of the ANC). One of Lonmin’s major shareholders and directors is Cyril Ramaphosa, the former NUM-general-secretary-turned-capitalist and, incidentally, also the head of the ANC’s disciplinary appeals committee who delivered the devastating expulsion ruling on Malema. Malema correctly pointed out that the massacre was government acting in defence of Ramaphosa’s profits and that the NUM had ceased to be a union and, through its investment arm, become “a company”. This message resonates deeply with workers who have experienced the counter-revolution within the former revolutionary NUM, and indeed ANC, which Malema unfortunately aims to re-enter at this stage rather than build a new workers’ force.

“This is not our government”, said women who on Saturday were protesting in search for their men who had been missing since Thursday.

In a matter of three minutes on Thursday afternoon the class character of the ANC government and the state machinery which the 3000 police stationed around Marikana are part of was exposed to millions. This may be a turning point in the class struggles in SA, which have been intensifying so that in the past three years each day has seen on average three mass protests.

The role of the media also stands mercilessly exposed to the workers at Marikana. The hail of false claims (e.g. the stories about workers being promised a 300% wage increase), omissions (e.g. how the violence was started), distortion by toning down (e.g the initial number of dead reported was 12) and exaggerating (e.g. how workers supposedly made outrageous demands and then attacked the police because they were “possessed” by a medicine man). The class hatred that has almost been dripping off the editorials in particular, have all been taken to heart. As a worker at Monday’s mass meeting said: “The same people who own Lonmin own the media.”

The class consciousness of the capitalist ruling class has also been sharpened, with the entire elite rallying behind the crushing of the workers’ uprising. Rattled, the bosses of the platinum and gold mining houses were in a meeting with Susan Shabangu on Saturday, apparently trying to figure out how to impose law and order without new embarrassments. Business Day, the most “serious” capitalist newspaper in SA, is hammering home the point that the capitalist ruling class and all its hangers-on must now rally behind the NUM â€“ this message of course remains wrapped up in euphemisms, but is still a crystal-clear admission of the role this union plays as capital’s specialised HR department, and worse.

Taking note of the concerted capitalist offensive, Rustenburg mine workers are intensely aware of the need to unite and organise as workers. While before the strike there were still wide layers of workers who, though having seen the NUM for what it is were still reluctant to abandon it for the untested alternative AMCU (Association of Mine workers and Construction Union), the events of last week have definitely sealed the NUM’s fate.

“The most burning issue now is to carry through the complete transfer of the members in all shafts from NUM to AMCU”, said one of the workers, and to find the bodies of everyone who was killed and bury them.

While the Lonmin strike is not lead by AMCU, and scepticism over it has increased for many workers who feel it is not standing the test of the strike well, it is clear that many, many workers will now join AMCU. AMCU is a break-away from NUM that spent most of its twelve-year existence out of the spotlight, without expressing any difference with the Cosatu unions in principle. The ferment which met it on arrival on the Rustenburg mines a couple of years ago appears to have overwhelmed it. As workers marched out of NUM at Lonmin last year, and at Impala Platinum and Anglo Platinum earlier this year, the AMCU has established itself as the main alternative. Workers at Lonmin, like workers all over the Rustenburg mines, decided to secure maximum unity in action by forming a workers’ committee without links to either NUM or AMCU. The AMCU leaders’ main focus at the moment seems to be to wash their hands off the accusations of irresponsibility that are being poured over them by the ruling elite. What role it will play going forward will be determined by the extent to which workers can set it on a fighting, socialist programme.

The Democratic Socialist Movement (CWI in South Africa) calls for a local general strike in support of the Lonmin workers demand for a living wage of R12 500 per month, for the formation of a Rustenburg-wide workers and community forum comprised of delegates from all the mines and the surrounding working class communities and for a national and international day of action in protest against the massacre and in support of the workers’ demands.

Already strikes are underway at two other Rustenburg mines over similar demands. Lonmin workers report that the police stopped and turned away three buses loaded with workers from Anglo Platinum, the world’s largest platinum producer which was also recently rocked by a “wildcat” strike, that were headed for the Monday mass meeting to show solidarity, and that workers of various shafts around Rustenburg have taken solidarity action.

South Africa: Mine worker massacre: workers imprisoned at mine shaft over three days without charges

On Saturday August 18, a group of about 100 women marched at the entrance of Lonmin’s nr. 1 shaft, demanding to go inside and see their men â€“ brothers, husbands, fathers â€“ whom they had not seen since the police attack on Thursday.

According to the police, 34 were shot dead on Thursday, 78 wounded and 259 detained. The women protesting in front of the blocked entrance say that many more are missing.

“I’m looking for my brother, said a young woman. I haven’t seen him since Thursday. I can’t sleep or eat.”

“I got an sms from my brother, said another young woman, he said that inside the shaft, they are forced to take off their clothes and the police pour burning water [chemicals] on their bodies, red and blue water. And they are beating them.”

The march, supported by comrades from the Democratic Socialist Movement (CWI in South Africa) branch in nearby Matebeleng and student leaders from the Tshwane University of Technology, proceeded to Lonmin’s Andrew Saffy Hospital, having been told that the information on who was being held by the police would be found there. At the hospital the demonstration was met by a locked gate, armed security guards and a Hippo (armoured vehicle). After about an hour’s heated protest and negotiations with the hospital management and the security guards, a small concession was won: the list of the hospitalised, dead and arrested was released. But most of the group were not interested in the list. “They haven’t put the real names”, said several of the women. “People are scared, and the list does not tell you anything.”

Others explained that the aim of the march had been solely to access the jailed workers, that they did not want to know at this stage who had been killed, that they were not ready for a situation where some among them would collapse and the protest would disintegrate. Darkness had fallen and the women agreed to meet up the following day.

On Sunday, at the funeral of one of the policemen who were killed during the clashes on August 13, SA’s newly appointed police commissioner Riah Phiyega said that the police should not be sorry, while the Lonmin management again presented the workers with an ultimatum to return to work or face dismissal. The 259 men, dressed in blood-stained clothes, some with make-shift bandages, appeared in court on Monday after being held for more than three days without charges. They were charged with murder, amongst other crimes, and kept in custody.