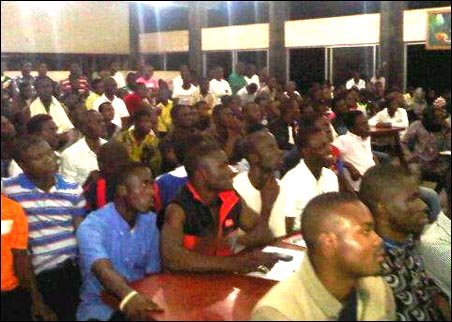 July 10 is perhaps the darkest day in the history of Obafemi Awolowo University (OAU). In 1999 it was the day when heavily armed cultists allegedly sponsored by the then Vice Chancellor of the University, Prof. Wale Omole, stormed the University and killed 5 student union leaders.

The slain students were George Yemi Iwilade (the then General Secretary of the students’ union), Babatunde Oke (a part 1 student and a member of DSM), Efe Ekede (part 3 Psychology), Eviano Ekelemu (part 4 medicine) and Yemi Ajiteru (an extra student). The backdrop to these brutal killings was the struggle of the Students Union for reinstatement of victimized student leaders and against anti-poor education policies of the government and university management.

To commemorate the 13th anniversary of this day, a symposium and candle-lit procession was organized at OAU by the Students Security Committee which was massively attended by students. Speaking at the symposium were Lanre Adeleke (former OAU Union president and DSM member), Akinola Saburi (another former Union president) and Adeleke Olorunwa (DSM member). The trio highlighted the history of the July 10 cult killings and the lessons worth learning from the incident.

Lanre Adeleke who was the Union President at that time of the killings narrated how it happened. According to him, in the early hours of that fateful day, men of the black axe confraternity stormed the campus and gruesomely murdered the five students. It is also on record that most of the notorious cultists were apprehended by organized great Ife students and they confessed to have been sponsored by the then Vice-Chancellor (Prof. Wale Omole). He lamented that due to the corrupt judicial system in Nigeria, the cultists were later discharged and acquitted and so 13 years down the line, OAU students are still crying out for justice.

The speakers pointed out that the most important thing now is for students to draw lessons from the sad incident and ensure that the labour of the fallen martyrs is not in vain. They were victims of the struggle for the defense of students’ interests and rights. Afrika as the Secretary General of the Students Union played a leading role in the fight for the right to independent students’ unionism and against anti-student policies like commercialization and privatization of education as well as campus cultism.

The anniversary of the July 10 cult killings has again highlighted the continuous attack on independent unionism in Nigeria. In OAU, attacks on independent unionism have not subsided, instead it has sharply increased over the last few years. 13 years after the killings, genuine student and worker activists who support struggles to demand and defend basic democratic rights are still being witch hunted by the university administration. The most recent has been the undemocratic proscription of the OAU students’ union. The union was proscribed 17 months ago due to a peaceful protest organised by students against an astronomic increment in acceptance fees for fresh students.

Students have however shown a growing interest to fervently struggle for the union’s restoration. This was reflected in students’ active participation in the July 10 remembrance activities despite the ongoing examination. Aside from the over 500 that attended the symposium, a far larger crowd turned up for the bonfire and candle-lit procession on 10th July.

The DSM commends students for their resoluteness and the only way to uphold the legacy of the fallen heroes in July 10, 1999 is to step up the struggle for the restoration of the union and against anti-poor attacks on public education.

It is important to note that the events of July 10 and the spirited fight back by conscious and organized great Ife students led to a decline in cult activities in OAU. This is not accidental but a product of the presence of a militant and independent union that can curb such activities.

This enviable tradition must not be allowed to die. The proscription of the union provides an opportunity for cult and other violent groups to thrive. Recent happenings on OAU campus gives reason to fear cultists are again regrouping and organizing on the campus. In the course of the semester, there were reports of at least 2 cult initiations.

The DSM joins all great Ife students in the demand for the immediate restoration of the students’ union and the recall of Wale Owolabi (a student activist who was victimized for participating in a protest against fee hike). We also demand the immediate and unconditional restoration of all banned unions across campuses in Nigeria. This is imperative to build a mass based formidable students movement that can counterweight cultism and oppose all anti-student policies.

To achieve this, there is the need for students to demand the democratization of the decision making organs of the universities to include elected representatives of workers and students. This will ensure a democratic process through which principal officers of universities emerge as against the current process shrouded in secrecy and corruption.

Students must however realize that under the current system of capitalism, these demands, if met are not sustainable. Students must be therefore ready to struggle for proper funding of education and ultimately join the campaign for a mass based political party armed with socialist programs. The Democratic Socialist Movement (DSM) has taken a practical step towards this end by launching the Socialist Party of Nigeria (SPN). We hereby enjoin students to join the party and participate actively in its activities.