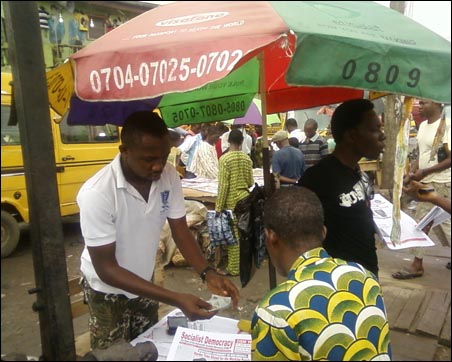 Early in July seven members of Democratic Socialist Movement (DSM) members from Agege branch set up a stall at Pen Cinema, Agege Lagos â€“ one of the busiest areas of Agege community.

It was a new turf on a Saturday sale, previous stalls had always been at Agbotikuyo Bus stop. We were armed with copies of the new July-August edition of our paper -the Socialist Democracy (SD) and some leaflets. Unfortunately we were ill-prepared for the early morning drizzle that has become the hallmark of the unpredictable rainy season.

We had hardly set up when it began to drizzle. Within minutes we stood the chance of losing both our papers and leaflets to the rain but for the benevolence of a working class woman trader (she sells mobile phone recharge cards) who lent us her stall which had a wide-brimmed umbrella.

This was a real saving grace. The umbrella sheltered the paper and sale was able to begin. We got a warm response from people. Within two hours we were able to sell 14 copies of the SD while we handed out about a 1,000 leaflets. We were also able to have discussions with those who stopped to have a look at the papers or to buy.

During this process we made three contacts who were enthusiastic about getting active in an organization like ours. Some also were interested in the Socialist Party of Nigeria (SPN) â€“ which the DSM is working to build and register with the INEC as a party that stands for the millions and not the millionaire looters!

Despite the lull in mass struggle since the January strike, experience of the paper sale demonstrates that there is still sufficient temper among the masses for a fight back. This explains the significance of selling 14 papers in less than 2 hours when it was not at a mass meeting or protest or at a period of mass struggle. Socialists would only be able to deepen this incipient mood for struggle when we continue to organize such activities like paper sales and other interventions.

Indeed it is not possible to imagine how many people are prepared to fight and join an organization that fights for change unless you get out there. The disillusionment in government policies and pronouncements is huge among working class people, youth and poor. So also is the thirst to get active and fight back.

The lead article in the new edition of the SD is “Oil subsidy probe; A peep into the capitalists’ chambers of fraud”. Not a few people who came to our stall expressed doubts that the probe of oil subsidy payment by the National Assembly could lead to anything.

It was really heartwarming that we could go out to have real discussions with people through the aid of the SD. This is exactly the purpose of having a paper. Our paper is an organizer and at the same time it is our means of reaching out and having live discussion with workers, the poor, youths, students and all those oppressed under the yoke of capitalism. With the paper we can, in many ways, help workers, youth and the poor in their struggle against anti-poor attacks. This could be through popularizing the struggle among the wider populace against the lies of government and proposing the best methods and strategy to win.

Beside other aspects of our work as Socialists, our paper is very important. We cannot successfully build a revolutionary organization to lead a socialist revolution out of the debacle and misery of capitalism without building, strengthening, selling and writing for the paper â€“ the Socialist Democracy.