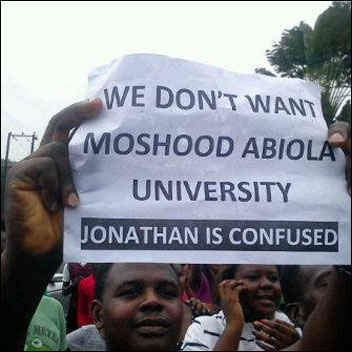 The Education Rights Campaign (ERC) condemns the undemocratic process through which the Federal government changed the name of University of Lagos (UNILAG) to Moshood Abiola University without consultation with students, staff and the entire university community.

We support the protest of UNILAG students which broke out spontaneously this morning (May 29) and continue even as we write. We urge students to use this protest as a springboard to make far-reaching demands that can improve the lot of public education like increased education funding, restoration of banned Students’ Union and the provision of modern teaching facilities, decent hostel accommodation and conducive learning environment.

In his May 29 Democracy Day address to the Nation this morning, President Jonathan announced the change of UNILAG’s name to Moshood Abiola University to immortalize the memory of late MKO Abiola, the widely-acclaimed winner of the June 12, 1993 presidential elections which was annulled by the military. The action of the Babangida-led military Junta in annulling the election provoked a huge and widespread mass struggle which lasted for years and only ended with the ouster of the military and enthronement of civil rule in 1999. 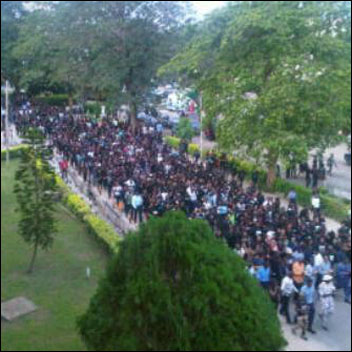 Students have nothing against immortalizing late MKO Abiola’s memory as a symbol of military rule. What students are opposed to is the undemocratic process through which the Federal Government changed the name of their University without consultation with students, staff and the University community. The ERC believes that if the Federal government meant well, nothing should have stopped them from consulting widely with students, staff and the University community before arriving at this decision.

It is indeed striking that it is on a day set aside to celebrate “democracy” in Nigeria that the Federal Government would decide to escalate its undemocratic credo. The Federal government has no right to determine the fate of a people by fiat. Students and staff have a right to be consulted and involved in any decision concerning their University including choice of name. It is this same fiat that the government uses to cut allocation to education without consultation with anybody. We believe this development raises the need for the democratization of the public education system in such a way as to allow students and staff gets more involved in the decisions about their school.

Moreso, students rightly feel that much more important than change of name are the real needs of the University which includes improvement in funding, provision of teaching and learning facilities, restoration of banned Students’ Union and improvement in the condition of the public education none of which were not addressed in the President’s speech.

Students have rightly asked how changing the name of the University would ensure improvement in the deplorable conditions of education. More horrifying to students is the fact that even while the current regime of fees are unaffordable to many students from poor homes, the government has begun to make plans for the introduction of tuition fees as the Oronsaye committee report demonstrates. These are the underlying feelings which have fueled this budding revolt and the ERC is totally supportive of this development. 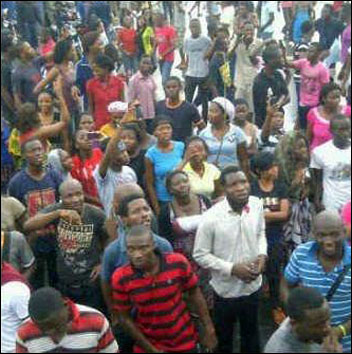 The ERC therefore call on the Federal Government to:

(1) Reverse its action and instead provide a democratic avenue for the elected representatives of students, staff and the UNILAG community to be involved in freely discussing whether or not the name of the University should be changed.

(2) Make a commitment to improve education funding and invest resources to provide teaching facilities, decent hostel accommodation and conducive learning environment in UNILAG and all other federal universities.

(4) Cancel fees in all higher institutions