LAGOS DOCTORS WIN ROUND ONE 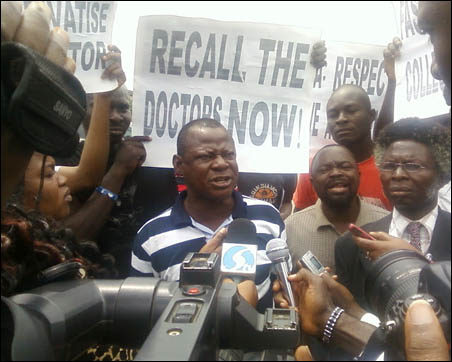 For Immediate and Unconditional Recall of all Sacked Doctors

For Full Implementation of CONMESS

NLC and TUC must intervene with Solidarity Action

The state commissioner for Justice, Ade Ipaye, had argued on Tuesday May 22 that the court lacked jurisdiction to hear the matter and that the suit was not competent because the Medical Guild on whose behalf it was filed is an unregistered group. He therefore asked the court to strike out the matter. Medical Guild is the association of medical doctors in the employ of the Lagos state and a group within the Nigerian Medical Association â€“ an umbrella body of medical doctors and dentists, both in public and private practice. This state government which claims it does not recognize the group has been long relating with it and indeed, the state governor, Babatunde Fashola, was present at the inauguration of the current executive of the guild. 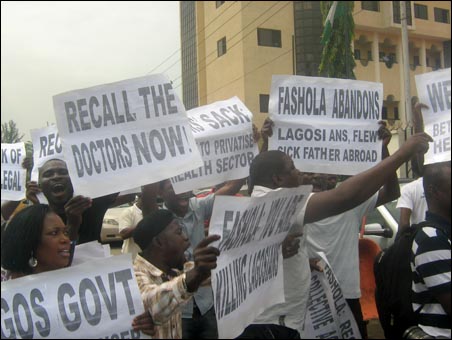 In the last 8 days the court sessions have been held three times and the Lagos state government, knowing well it has a very bad case, has been employing different delay tactics and underhand antics to frustrate the judicial process. The matter could not come up for hearing on the first day, Wednesday May 17 because the government claimed that it was not served the court process within the stipulated time, though the court record showed otherwise. On the next adjourned day, May 22, when the matter should have proceeded to trial, the government came with the preliminary objection.

The doctors had originally gone on a three-day warning strike on April 16. But instead of meeting their demands, the state government issued a raft of queries to the doctors that participated in the strike aside other threats and intimidations. Indeed a meeting of doctors was invaded and disrupted by security operatives sent by the state government. It was this ruthless intimidation that provoked the doctors to declare indefinite strike. 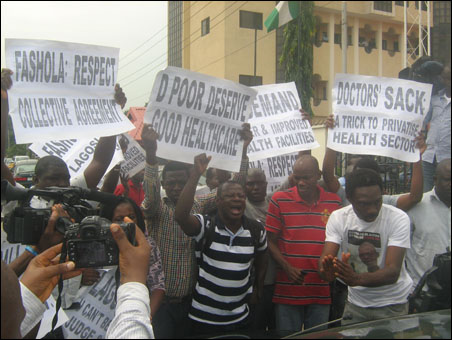 The sacked doctors have however enjoyed massive support from their colleagues nationally. The national president of NMA, Dr. Osahon Enabulele, came to Lagos to intervene, and addressed a press conference when the government refused to meet its demand for the recall of the doctors. Giving reports of his meeting with the State government on Thursday 10 May 2012, the NMA President attested to the arrogance and disdain which has now increasingly become the response of the Governor Fashola ACN-led administration to every demand of workers and poor.

According to him “whereas the NMA was resolved to sacrifice all the time to ensure a negotiated settlement of the crisis the mulish posture of a conqueror exhibited by the Head of Service acted as a wet blanket”. This same disdain is at the root of the strike. The NMA president therefore hinted on the plan for a national solidarity action with Lagos state doctors and that an appropriate national meeting to that effect would be called soonest.

An indefinite sympathy strike as the federal doctors have already begun requires serious mobilization and sensitization of rank and file doctors, health workers and the general populace to be seriously sustained for any length of time. This is moreso given the sensitive nature of the health sector and the way a total shut down affects the general populace. However the spirit of solidarity expressed by federal doctors to their sacked colleagues must be commended. The general working class can learn a lot from it. Even as the solidarity strike is on, the doctors still allow treatment of the most emergency cases. 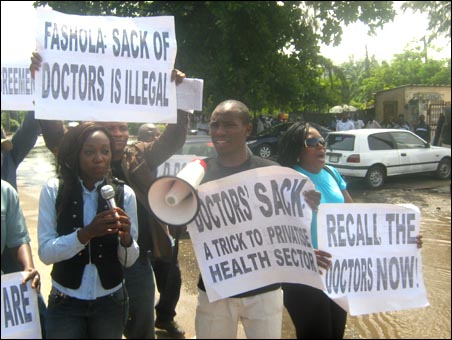 Now the solidarity strike and the resultant total shut down of public hospitals in Lagos state has entered its 6th day while the government shows no sign of backing down. The DSM urges activists of the Medical Guild and the NMA to begin serious discussion within their rank and file on how best to sustain both the original strike and the solidarity action. To prevent possible slackening of the solidarity strike, doctors have to decide through democratic discussion whether or not to suspend it in order to resume later. This will not necessarily mean a retreat on the part of doctors. If backed up with immediate mass actions of public protests and demonstrations targeted at winning the support of the general populace, it can help build a new momentum for a solidarity strike of federal doctors not just in Lagos state but also across the country.

The DSM urge doctors to adopt the most realistic and positive method that can build the struggle forward, isolate the government and win the support of the wider working class. Clearly mass actions like public rallies, protests and demonstrations are urgently needed to bring the battle to the streets â€“ that is to the working class and poor. This the doctors are not doing at the moment â€“ something which could constitute a danger to the success of the strike in the long run.

Only a show of strength through public mass action can compel the arrogant state government to reverse the sack and meet doctors’ demands. The doctors must match the legal battle with various mass activities. Already, the court premises have been turned by the Joint Action Front (JAF), a coalition of socialist and pro-labour organizations including the DSM, to the arena of solidarity action in support of the medical doctors. This is part of various activities by JAF to mobilize mass support for the sacked doctors. The members of DSM have been participating actively in these solidarity actions. A special DSM leaflet was produced and circulated.

The steadfastness of the doctors is commendable, but they have to do more in order to win and sustain the public support as well as keeping their rank strong. The doctors should prepare to hold protest marches and organize free medical clinic in some designated centres across the state. This would help mobilize mass support and mitigate the effects of the irresponsible action of the government on the poor who cannot afford treatment in private hospitals. 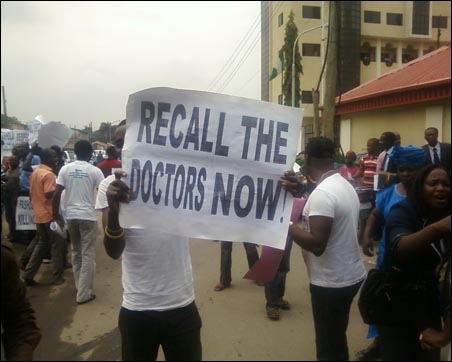 Also importantly, against the background of the collapsed health care infrastructure in the state, doctors have to link their demands for full implementation of CONMESS with demands for adequate funding of health care and the overhaul of facilities in all public hospitals in State. Also needed to be raised to the fore of the strike is the demand for employment of more doctors to reduce the current tragic situation where only one doctor is available for 14, 545 people as against the global standard of 1doctor to 1,000 patients!

With the sack of the doctors the current situation in public hospitals has got much worse. The state sacked 788 doctors and replaced them with about 300 who are put under a very terrible condition of service. Indeed their letters of appointment shows they are no more than casual workers! This again exposes the lies of the government and its total disregard for human lives.

As one patient interviewed by the Guardian newspapers (12/5/2012) lamented “but why is the government doing this to us? Must we all die before they stopped playing games with the doctors?” While poor Lagosians have nowhere to turn to, the rich and privileged elected public officials are quick to extricate themselves and their families from the mess created by their policies. Patients in many public hospitals across the state continue to complain that there is no sign of the new doctors government claimed to have recruited. Even in places where the media reported student doctors and nurses attending to patients, all they could render has been skeletal services which fall short of demands.

However as tragic as the situation already are, things promises to take a further sharp decline going by the protest of nurses and health workers in LASUTH on Friday 11 May 2012. Nurses and other category of health workers have been the ones holding the fabric of healthcare together with their rendering of skeletal service. But they are also not spared of the State government’s disregard for workers welfare.

The nurses and other health workers on protest to demand payment of a nationally agreed wage structure (CONHESS) and threatened to strike. Their grievances bear striking resemblance to those of the striking doctors. According to the workers “the CONHESS government has implemented has taken us backward by 15 years with eradication of annual increment and seniority allowance. The implementation has eradicated grade level steps among all public servants in Lagos”. This looks very much like the government’s version of CONMESS which the on-going strike of doctors is meant to reject.

This again shows the total lack of sincerity on the part of the government and the urgent necessity for pressure to be put to bear on the government to meet demands of doctors and all health workers in the State. It shows it is not just doctors that are being mistreated but the entire category of health workers and indeed all workers in the State. 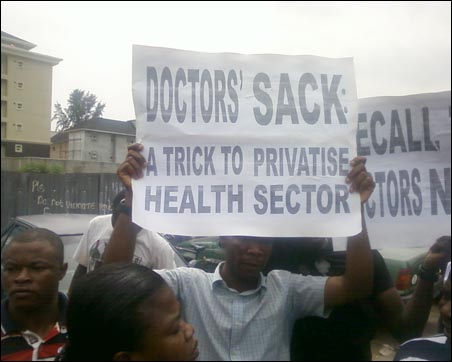 Fashola’s ill-thought action threatens the life of ordinary people in Lagos who have no other alternative to the public hospitals. If Fashola and the ACN are allowed to get away with this vicious attack on doctors, then all other categories of public sector workers in the State will sooner than later be treated in the same way. Besides, other governments, both state and federal, would also emulate this draconian method of suppressing the workers agitation with sack. Already, Zamfara state government also threatened to sack workers who had gone on strike for implementation of new minimum wage.

This is one of the reasons the leadership of the trade union federations (NLC and TUC) must not remain silent in the face of vicious attack aimed at decimating strike as a weapon of workers. The NLC and TUC must organize solidarity action in support of the medical doctors, linked to the demand for urgent investment in health provision. If Lagos state succeeds, it could become difficult to call workers out in strike. The attack on doctors has further weakened the public sector workers in the state who have only been murmuring against the failure of the state to fully implement the new minimum wage.

This anti-poor attitude and disdain for workers runs through the bloodstream and sinews of the ACN. Just recently, low-paid council workers in Ewekoro local government protested the deductions of their salary by the Council boss ostensibly to fund a multi-million naira welcome party for the Ogun State governor Governor Ibikunle Amosun (also of the ACN) who was visiting the local government. In Oyo State, public sector workers continue to be denied the national minimum wage by the Ajimobi (ACN) administration.

Everywhere they have been tested by voters looking for an alternative to the PDP, the ACN politicians do not fail to prove they are more brutal than any full-blooded PDP politician in attacking the interest of workers while laying claim to a progressive credential at the same time. It is time to send this party out of power and replace it with an alternative party that genuinely stands for the interests of workers and the poor. Steps towards creating such a genuine alternative can only be found at this time in the Socialist Party of Nigeria (SPN) which the DSM is currently building.