May Day in Nigeria: 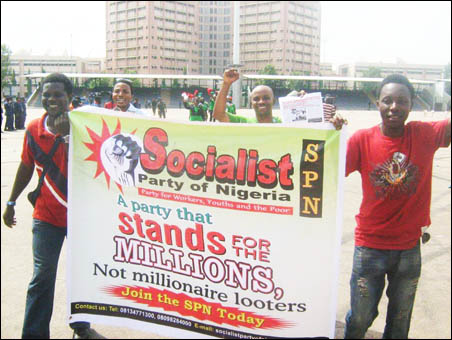 Nigerian workers joined their counterparts globally to celebrate this year’s international workers’ day with merrymaking and fanfare in all the 36 state capitals and Abuja, the Federal Capital Territory, where the central rally was held. This year’s May Day was held with the theme “Right to work, food and education: Panacea to insecurity”. Traditionally, the main feature of May Day in Nigeria is a fanfare with governors and the president, or their representatives, taking salutes of workers parading diligently like school boys and girls in front of them in a march past.

Ordinarily May Day should have offered opportunity for workers to pose their demands and agitation before the government. Unfortunately, this is not the case. In most cases, the workers, smartly and colourfully dressed in various trade union attires, usually struggle to impress the government representatives as if there would be an award for the best performance of the march. 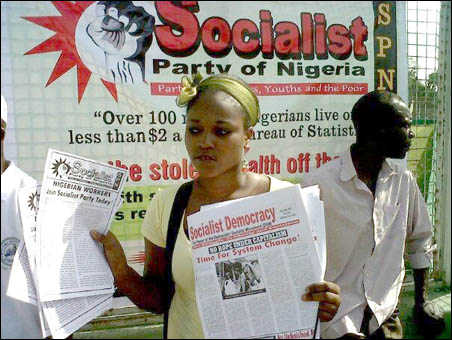 However, in Osun state a good number of workers did not even wait to participate in the march past as they had walked out on the governor in protest at his failure to make a commitment on the full implementation of the minimum wage. They were also angered by his blatant lie that the state was paying the highest minimum wage in the country in apparent reference to the least paid civil servants who collects N19, 001. In reality those in higher grade levels, who constitute the bulk of the workforce, have only ridiculous amounts added to their salaries. 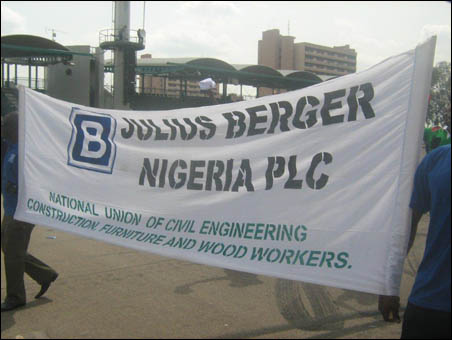 The governor, who had earlier enjoyed rousing welcome on his arrival, was left in rude shock by this turn of events. The security operatives immediately started looking for scapegoat and found one Democratic Socialist Movement comrade who carried placards denouncing poor implementation of minimum wage and casualisation of labour in public service under the guise of the OYES scheme under which university and polytechnic graduates are paid slave wages of N10,000 and are not allowed to join trade unions. Some of the placards were forcefully seized. 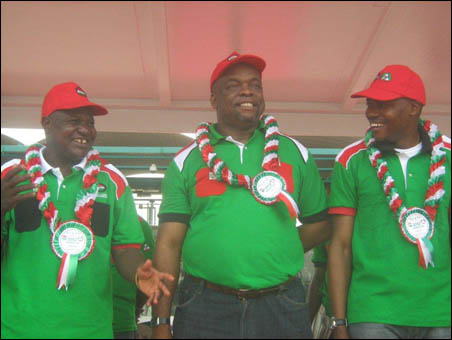 Elsewhere across the country, the best agitation of workers against governments’ claim of implementation of minimum wage or failure of it was murmuring. This was the case in Lagos where the labour leadership in their speeches made attempt to run with hares and hunt with hounds in respect of the minimum wage issue. The state chairman of the NLC for instance commended that state governor for being the first in the country to “embark on the implementation of the new national wage which is currently costing the state government some fortune“. He then went ahead to contradict himself, “it is scornful for the workers to know now that this was not the case after all. This is why we would like to draw your attention to the fact that new wage has not been fully implemented“.

Many of workers who bought copies of the DSM paper, Socialist Democracy, with its lead story on the minimum wage complained bitterly about the utter falsehood called minimum wage implementation. We urged them to fight for the full implementation; otherwise the situation would remain the same. Unfortunately, the Lagos state workers currently do not have a fighting leadership, of course this is the case in virtually all the states. However, the fact that they put the issue of the minimum wage in their speech, unlike last year where they painted an “all is well” picture, reflects effects of some pressure from below. 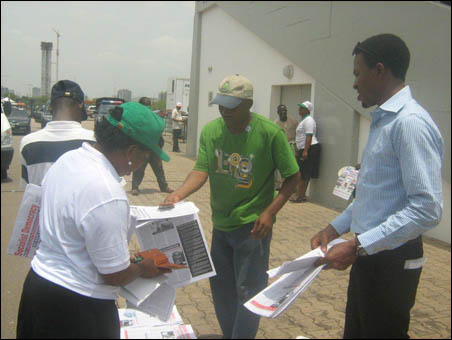 But while there is no sign of fight-back, the Lagos state governor has already geared up for war. He threatened workers that the state would not be stampeded into paying wages it does not participate in negotiating and for which no funds are made available by the federal government. This message is not only meant for workers whose unions are affiliated to NLC and TUC but also to doctors in the State who are on indefinite strike for the failure of the government to implement CONMESS, a national agreement on unified pay structure for medical practitioners. It is not only hypocritical but also cruel for a governor who pays himself and other political officials jumbo salaries and allowances as prescribed by a federal government agency to deny workers the benefit of a similar national arrangement.

It is preposterous that in Oyo where the public sector workers recently went on 15 days of strike and struggle for the implementation of the minimum wage, there was no single demand on minimum wage from labour leaders at the May Day apart from the banner and placards displayed and leaflets circulated by DSM on the subject. The state leadership only consciously mobilized the trade union officials at unit and affiliate levels to the May Day in order to prevent a situation of rank and file workers embarrassing the state governor.

In order to have a big crowd at the event, artisans and other informal sector workers were well mobilized by the Oyo trade union leadership leaving out the great bulk of the combative public sector workers who had been striking and protesting since last year against the state government. The state government had tried to win the informal sector workers to its side on the issue of minimum wage with a divisive propaganda that the full implementation of the minimum wage would gulp almost all the state revenue and prevent it from financing other social and infrastructure needs. The state trade union leadership has not however done anything to debunk the falsehood of the government and mobilize the support of the public including the informal sector workers in the struggle for implementation of the new wage. It should be recalled that the trade union leadership has already compromised with the state government which necessitated them being shoved aside by the rank and file workers who had elected a caretaker committee to prosecute the struggle until it was suspended. 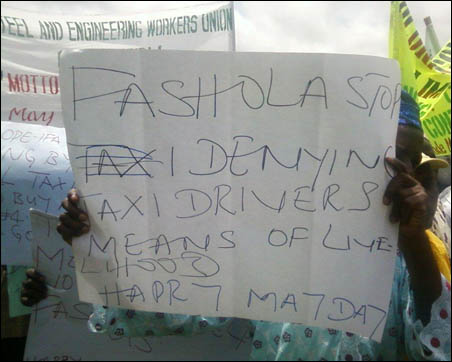 In Edo and Ondo it was the politics of the forthcoming gubernatorial elections that dominated the rally. Everything was geared towards mobilizing the mass support of workers for the respective incumbents. Therefore, the May Day was merely for the praise-singing of the respective state governors as they prepare for elections. It should be recalled that the Edo state leadership of NLC and TUC had recently held a mass rally in support of the second term bid of Adams Oshiomhole. The May Day event only provided avenue for the continuation of the solidarity for the governor.

In Abuja, where the central rally was held there was mention of the minimum wage by the Presidents of NLC and TUC. But there was also an impression created that it is only three states, Enugu, Ebonyi and Kwara, where the minimum wage has not been implemented. Of course Oyo state got a mention apparently because of the recent struggle of workers. The reality is that the non-implementation transcends the states mentioned; there is hardly a state where there has been full implementation. The national labour leadership has to do more than lamentation or mere threat of strike. They have to seriously initiate a series of actions centrally coordinated to achieve the full implementation.

The national labour leadership also used the occasion to lend support to the report of fuel subsidy probe which exposes the monumental frauds that characterized the administration of the so-called fuel subsidy. They however created illusion that all would be well once the recommendation of the committee is implemented. Yes, the DSM supports all measures that would bring the culprits of fuel subsidy fraud to book. But we hold that it is only the defeat of anti-poor neo-liberal capitalist policy of deregulation and privatization while the oil industry is nationalized under the democratic control of workers and relevant professionals that could bring a lasting end to the fraud and ensure that oil resources are used for the benefit of all.

Strikingly, despite fanfare dominating nationally, in some states the May Day however witnessed some small independent actions of workers in certain sectors who have ongoing trade disputes. In Lagos for instance, the striking doctors distributed leaflets which explained and chronicled their struggle, which has lasted about 3 years, for the implementation of CONMESS. Also in Lagos the Taxi drivers came with placards to protest the anti-poor policy of the state government that outlaws the use of tokunboh cars (imported used cars) for taxi operation in the state. They are being asked to buy brand new cars in whose dealership the state commissioner of transport has vested interest. The cars cost at least N4.5million Naira. This price is clearly beyond the reach of the poor working people who operate taxi in the state. Throughout the federation the electricity workers used the May Day to re-affirm their opposition to the planned privatization of PHCN, the public electricity company.

Members of the DSM intervened at May Day in 9 centres across the country, namely Lagos, Oyo, Ondo, Ogun, Osun, Edo, Niger, Delta and Abuja. Over 1,000 copies of Socialist Democracy were sold during the May Day itself and at the pre-May Day symposia and activities in Lagos, Oyo, Osun and Abuja. In Oyo state, about 3,000 copies of special DSM leaflet in support of the minimum wage were circulated. In some of the centres, DSM comrades participated in the march past with our banners and placards. 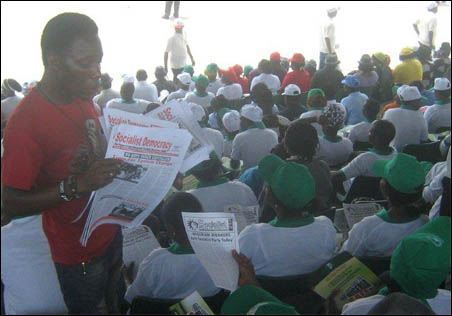 The major highlight of the intervention was mass distribution of about 20,000 copies of a special leaflet calling on workers to join the Socialist Party of Nigeria which the DSM is planning to register with the national electoral body, INEC, in line with requirement of the constitution and electoral law.

The failure of trade unions to build the Labour Party as a fighting working peoples’ party and the absence of a pro-worker registered party has meant that there is no party standing in elections in Nigeria today that truly represents the interest and aspiration of the working people. The SPN is meant to fill the void, while at the same time as the DSM continues to campaign for the formation and building of a pan-Nigeria mass working people party with a socialist programme.

The leaflet was well received by workers some of whom have come to the conclusion of the need for a political alternative to the anti-poor pro-establishment parties. Some of the workers put down their names while some promised to reach out to us. In reality, some workers have already telephoned to ask more about the party after the May Day.