Workers with LAGBUS Asset Management Limited embarked on February 9, 2012 on their fourth strike since the establishment of the company. The strike was initially organized to last between the hours of 6am and 10am, but was suspended at 8am after the Lagos State Commissioner for Transport Mr. Kayode Opeifa appealed to the branch union leaders to suspend the strike to allow for negotiation that would lead to a resolution. All major depots were shut down for the period of the strike.

It is instructive to state that such promises have always been given by top management and government officials, all to no avail. Virtually all the demands workers are struggling for have been in existence since operations started in LAGBUS. The demands are (1) increment in salary and allowances, (2) 8 hours per day (40 hours per week) as against 16-hour daily on a one-day-on, one-day-off, which is about 60 hours weekly, (3) a documented and binding condition of service, (4) end to indiscriminate sack and victimization of workers and recall of all sacked workers activists (5) end to contract staffing and casualisation, (6) end to illegal deductions of workers’ salaries by the management etc. The refusal of the management to meet the aforementioned demands was responsible for the first strike that took place on October 17 2008, the second strike on April 6, 2009, the third on August 17, 2009 and now the fourth on February 9, 2012.

Workers were bitter at the state of things in LAGBUS, which some of them call a slave camp. Some of them question the wisdom for the planned 5-year anniversary party by the management and Lagos State Government, which would gulp millions of Naira, when workers are suffering. At present, the company has about 1,000 contract staff as against about 400 regular staff. This means that over two-thirds of the entire staff are outsourced to 5 contractors namely Driving Solution, Excel, Bucad, Tempey Konsult and NURTW. 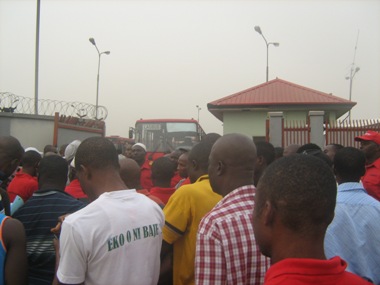 The sweeping of the depots and washing of the buses are also contracted out to 4 outfits known as OILIB SIBOG, DAGO, GABAK VENTURES and CLEANIX who pay their staff a meager sum of N10,000 for sweepers and N12,000 for bus washers per month. These slave wages are in violation of the 18,000 Minimum Wage Act. Drivers earn N35,000 while the ground staff who are bus assistants earn N25,000 per month. Due to poor maintenance policy that is fast killing the company, about 350 buses are currently in a state of disrepair out of a total of about 675 buses. The repair of buses in LAGBUS is contracted to different private outfits that have turned out to be expensive and unsustainable because the costs of repair are usually inflated. One of the biggest exploitation currently is the supply of diesel by Oando, a company owned by Wale Tinubu, nephew of the former Lagos state governor Bola Tinubu, which is the sole supplier of diesel to all LAGBUS buses. As at November 2011, OANDO sold diesel for N170 to LAGBUS on a daily basis despite supplying thousands of litres per day while the same OANDO sold a litre of diesel for N150 to the public!

During the strike action on Wednesday February 9, armed men of the special police squad Rapid Response Squad (RRS) were as usual stationed at all depots to intimidate workers. Mrs. Olola Aina, the Head of Corporate Affairs also led a team of management staff to the Toll-gate depot to intimidate and harass a victimized worker (Mr. Solomon Adijie), whose I.D card and only LAGBUS t-shirt he was wearing were forcefully seized. She went further to order the RRS policemen to apprehend him but for workers, union leaders and some activists who stood their ground to forestall the arrest. A meeting was held subsequently between the branch union EXCO and the LAGBUS management at about 11am at Alausa Ikeja and was chaired by Mr. Salvador Adegboyega, Special Assistant to the governor on Parastatal Monitoring wherein the management promised to “look into the matter raised by the workers in the next 2 weeks”. Now it is over two weeks, and just like other previous promises, there has not been attempt or effort to meet the demands of the workers.

Mr. Solomon Adijie and his colleague Mr. Adebayo Samuel have been stopped from working since January 2011 by Driving Solution for leading other contract staffs to join the union. It should also be recalled that four workers’ activists (Mr. Mark Marvelous, Mr. Jeffery Okosi, Mr. Toyin Taiwo and Mr. Olanrewaju Babatunde) were arrested at Owode for leading the August 17, 2009 strike by RRS policemen and detained at the Lagos Police Command at Ikeja for 5 days before being charged to court on trumped-up charges on Monday October 5, 2009 at the Ikeja Magistrate Court 10. Their case is presently at Igbosere Magistrate Court 14 with next sitting coming up on March 6. The arrest of these activists was ordered by Mr. Kayode Opeifa, who was then Special Assistant to the Lagos State governor on Transport. 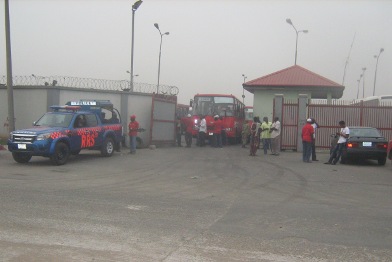 The Campaign for Democratic and Workers’ Rights (CDWR) condemns the intimidation, harassment, illegal sack and arrest of LAGBUS workers agitating for better working condition. We call on the government and the management to immediately meet the demands of workers, particularly the immediate and unconditional withdrawal of the charges against the four victimised workers. The LAGBUS workers have also called for the unconditional reinstatement of all sacked workers, increment in salary to a living wage, implementation of a better condition of service, regularisation of all contract and casual staff with rights to belong to a union of their choice, and 8-hour per day with Saturday and Sunday a rest day or overtime for willing workers.

In order to forestall the collapse of LAGBUS as an entity considering the poor maintenance policy and other matters with their attendant adverse consequences for public resources invested so far, the company must own and maintain a workshop and maintenance department to repair and service these vehicles including washing/cleaning of the vehicles. A section of this maintenance department should accommodate spare parts store wherein the management, based on its experience, places regular orders directly for different spare parts from the auto company that manufactured the buses. Workers in the maintenance department like other departments should be well trained and paid a living wage with good working conditions and conditions of service. This policy must go hand in glove with a management team that has experts and elected experienced workers to democratically manage the operations and resources of the company in order to forestall corrupt practices arising from a bureaucratic, secrete cult-like management.

Chinedu Bosah, the Publicity Secretary of CDWR, addressed LAGBUS workers at the Toll-gate depot and called on them to stay united despite working for different contractors and LAGBUS, and all issues affecting all workers must be struggled for by the workers and the branch leadership of the union. There was air of confidence among workers when they were informed that somebody from the CDWR had come to solidarise with them. Expectedly, the key members of the management were not happy and that prompted an altercation between Mrs. Aina and Chinedu. The management insisted that workers embarked on illegal strike and that CDWR was instigating it while CDWR insisted that workers have right to embark on strike and that CDWR will always support workers struggling for improvement in their welfare, particularly where workers are subjected to slavery condition.