WE DEMAND PUBLIC APOLOGY FROM POLICE AND GOVERNMENT 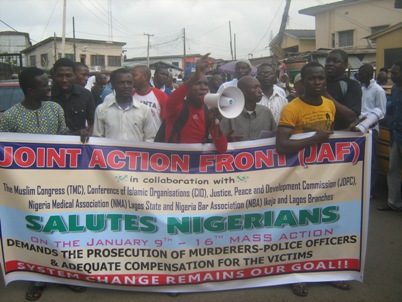 The Democratic Socialist Movement (DSM) condemns the February 18 crushing by armed police of a memorial procession organized in Lagos by the Joint Action Front (JAF) to mourn over 20 protesters killed across the country during the 5 day general strike and mass protest against removal of fuel subsidy in January.

On Saturday 18 February 2012, over 100 activists, including members of the DSM, marched under the auspices of JAF from the Nigeria Labour Congress (NLC) Secretariat in Yaba, Lagos to commemorate the 40-day remembrance of the killings. Leading the procession were Dr. Dipo Fashina (JAF Chairman), Abiodun Aremu (JAF secretary), Mrs. Ganiyat Fawehinmi and Mohammed Fawehinmi.

However at Maryland, armed policemen prevented the procession from getting to its destined point which was the Gani Fawehinmi Freedom Square â€“ the scene of mass demonstrations of hundreds of thousands in January â€“ where prayers were planned to be offered for the dead by Christian and Muslim clerics.

In a most violent manner, armed police fired volleys of teargas canisters into the crowd before they charged to make arrests. The usual police tactic is to fire over the crowd so that no one gets a direct hit. But apparently wanting to send a strong signal that a government that is powerless in the face of Boko Haram terror strikes, armed robbery and violent crimes can still deal with a bunch of unarmed protesters, the police went totally vicious. Most protesters were directly hit by tear gas fumes and it was only by chance that no one suffocated. Even passersby had to scamper for safety as motorists halted in the middle of the road and hurriedly wound up their windows.

At the end of this vicious attack which lasted over 30 minutes, about 20 activists including Dr. Dipo Fashina (JAF Chairperson) were arrested. A journalist was equally arrested for covering the attack. They were released after being detained at the Lagos State Police Command, Ikeja, for hours.

The DSM condemns the attack on unarmed protesters and the arrest and detention of leaders and members of JAF. The DSM demand a public apology from the police authorities and the government for the brutality meted on the activists.

Lying through their teeth to defend the brutal attacks, the state Police Public Relations Officer (PPRO), Mr. Joseph Jaiyeoba claimed “The police had to move in to stop them because miscreants had under the cover of the protest, hijacked it to destroy properties â€¦They capitalised on the opportunity to cause mayhem and that was why they were arrested and taken to the police command headquarters.” (ThisDay, Monday 20 February 2012).

The truth however was that the procession was peaceful all through without any destruction of properties. The only violence that occurred was the one visited on the procession by armed police. For instance JAF chairman Dr. Dipo Fashina had his cloth torn by the police. This confirms reports by detained protesters that they were assaulted by the police while in custody. 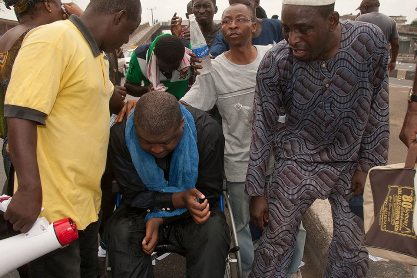 Even Mohammed Fawehinmi (son of late prominent human right activist, Gani Fawehinmi) who is confined to a wheelchair, was not spared of the assault. Tear gas was deliberately fired at him and he was engulfed in a pall of smoke. It took the intervention of his mother and other protesters to save him as he writhed in pain on his wheel chair while the police standing, guns ready, 100 metres away watched indifferently. Meanwhile none of those arrested was a miscreant. All those arrested are leaders and members of the Joint Action Front (JAF).

The police PPRO went on to admit that “we had to nip the protest in the bud because they did not officially inform us neither did they seek permission before coming out en mass.” As far as we are concerned this law, reminiscent of Nigeria’s colonial past, is undemocratic. The duty of the police is not to be the clearing house of protests and demonstrations, but to ensure at all times and especially anytime protests occur that lives (including the protesters) and properties are well protected.

The real reason why all public processions and demonstrations since January 16 2012, when the leadership of the Nigeria Labour Congress (NLC) and Trade Union Congress (TUC) capitulated and called off the strike, have been viciously attacked is because President Jonathan’s anti-poor government wants to strike fear and terror into the minds of people and cow them into submission. The regime, having recovered from the initial shock of the 5-day total general strike and the most widespread mobilization and mass demonstration ever seen in Nigeria, wants to ensure such history never repeats itself. Their slogan now is “never again!” This explains why a law that demands police permit before a protest can be organized, still in force since colonial days, is now being viciously enforced.

The DSM believes Nigerians have rights to organize public rallies and activities to express themselves as enshrined in the 1999 constitution. We therefore urge the NLC and TUC, as well as pro-masses, organizations, to also publicly condemn the attack and arrest. This attack brings to mind the dark days of military dictatorship in Nigeria when democratic rights to organize and express themselves were suspended by fiat and any voice of dissent crushed.

Against the background of the increasing deployment of military for internal activities and the emergency rule declared in some states of the North East of Nigeria ostensibly to fight Boko Haram, the recent violent police attacks on public protests indicates frightening signals of the incipient descent of Nigeria into another era of military absolutism and despotism. This is the more reason while the labour movement must not watch indifferently while the government snatches away the most basic democratic rights won over the years by the masses of Nigeria in struggle and not even submitted under military rule.

We call on the NLC and TUC not only to condemn this, but also to organize mammoth rallies and demonstrations across the country to reaffirm the fundamental rights of people to organize and protest. Most importantly too, the labour movement will have to intensify its campaign against privatization of PHCN and the hike in electricity tariff, deregulation, education commercialization, for payment of new minimum wage, against sack and retrenchment etc as a basis to begin again to raise the confidence of the working masses and youth and to roll back the vicious neo-liberal attacks being unloaded on the working masses by the government.

How far the regime’s repression of democratic rights can go in preventing a new uprising of the mass of the people is yet to be seen. The stark reality of existence since the end of the general strike with prices of most goods and commodities not yet back to their pre-January levels and unemployment and poverty increasing daily shows the terrible conditions still in store so long as the current pro-rich and anti-poor government of Jonathan and the system of capitalism continues. 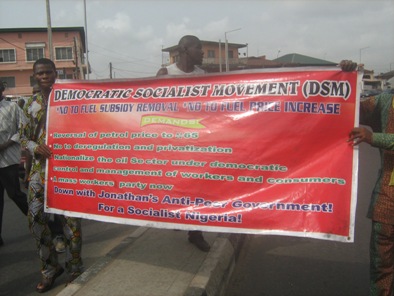 While members of the ruling elite in government (lawmakers and executives) continue to wallow in obscenely luxurious existence with looted funds, the media is reporting more job losses even in banks in a country already having a 23.6% unemployment rate and over 28 million unemployed youth. The new NBS 2011 statistics of poverty levels shows how unequal society has become. In a population of 160 million people, wealth is concentrated in the hands of a tiny 1% made up of politicians and capitalists while over 100 million people are living in poverty.

Against this background, police repression and withdrawal of democratic rights will ultimately fail to cow people into submission. The deep subterranean factors maturing in the heart of society will at some point push the masses of workers, youth and poor people angered at the unjust system and the corruption and profligacy to come out again in strikes, street protests and demonstrations as they did in January. Having learnt of their power in the mammoth country-wide demonstrations in the first two weeks of January which if properly led by the labour movement could have won far-reaching concessions, the masses will again rise in anger.

However, to win this time around, the working masses, youth and poor will need to right from the first day of the struggle ensure the struggle is built and controlled from below through democratic strike/action committees built in workplaces, communities and schools instead of from the top as we had in January which gave the bureaucratic leaders of the NLC and TUC to betray.

To ensure lasting change, there is the urgent necessity for the formation and building of a mass workers’ political party that can lead a revolutionary movement to chase away the President Jonathan’s corrupt government and the unjust system of capitalism and enthrone a workers’ and poor people’s government that can, through socialist programs, use society’s resources to cater for the interest of the vast majority.