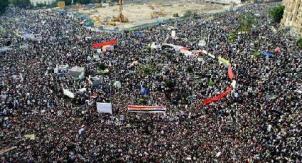 Masses in Cairo and other cities demand end to military rule

Yesterday, 25th January, marked the first anniversary of start of the revolutionary movement of the masses in Egypt, which eventually led to the fall of the dictator Hosni Mubarak. Yesterday, millions of Egyptians again took to the streets, celebrating the achievements of the revolution and remembering the martyrs killed by the police and army. Many protesters also demanded the removal of General Mohamed Hussein Tantawi, the leader of the ruling Supreme Council of the Armed Forces (SCAF), as well as calling for genuine democratic rights, real social change and to end poverty and joblessness.

A CWI member from Austria is visiting Egypt and sent this report on the enormous demonstrations in Cairo yesterday, commenting on the mood and demands of protesters in Tahrir Square.

According to Al-Jazeera, on January 25th 2012, a countless number of people rushed to Midan Tahrir, the huge square in central Cairo, which became the symbol of the Egyptian revolt of early 2011. From early morning, people from all parts of the megacity marched towards Tahrir (which means ‘Liberation’ in Arabic). By around midday, the place was so crowded with people that it was impossible to cross the square from one side to the other. And now, as I send this report â€“ late afternoon in Cairo, January 25th â€“ there are even more demonstrations arriving from the far edges of the city to the square. Many of the demonstrators I spoke with said that today there are more people present than during the height of the revolt, last year.

The mood was nervous the day before the anniversary. People queued at ATMs to get cash and to buy food for a couple of days. I asked people queuing at an ATM why they took these precautions. They answered, ‘You never know, maybe the banks will close the ATMs, like they did last year.’

Shop windows and restaurants near Midan Tahrir were covered with wood and metal. The streets leading to the government department districts were blocked with barbed wire and walls. But neither the police nor army forces were on the streets.

On the evening of the 24th January, the square was filled by tens of thousands, despite heavy rainfalls and cold winds. The mood at this demonstration was great. People shouting with pride and joy that they were part of such an iconic movement and directed anger against the military rulers. They are angry at the continuing rule of General Mohamed Hussein Tantawi, the leader of the Supreme Council of the Armed Forces (SCAF), who assumed power after the fall of Hosni Mubarak. The evening of the 24th January was test for the protesters â€“ can they mobilise in large enough numbers? The answers was a clear Yes! There was no room for doubt. 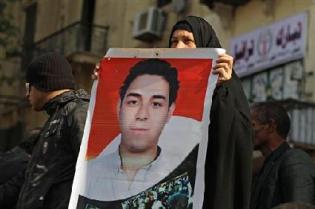 On the morning of 25th January, I woke up because of the chants of protesters. Thousands remained in Midan Tahrir overnight. And then millions of people streamed into the square during the morning. The mood was a mixture of a party and a demonstration. Street vendors sold everything, from flags and stickers to cigarettes, tea and food. People celebrated their “free Egypt”. At the same time, they demanded the end of military rule. The noise in the square reached an overwhelming roar when the masses chanted, ‘Down with Tantawi!’ and ‘Down with the military!’ I have never witnessed such a large or noisy demonstration.

From blogs and the Egypt media I saw reports of demonstrations in other parts of Cairo. At Dokki, a neighborhood in Giza, on the other side of the Nile from Tahrir, a demonstration of several tens of thousands waited to start making its way to Tahrir because the bridges across the river were already congested with demonstrators. There were also several demonstrations from southern parts of Cairo â€“ each of them several thousands strong â€“ that could not reach Tahrir for a long time because streets were jammed with protesters.

And where were the armed forces and the government? They obviously realized that they could not use exploit the anniversary as they had wished. I did not see a single policeman or army officer at Tahrir or anywhere nearby. I only spotted some police in the streets that are blocked near the parliament building. But their numbers were tiny. The government decided to do nothing about the anniversary celebrations apart from providing vehicles with drinking water and ambulances.

The Egyptian media reported that more than half a million demonstrators marched through Alexandria and tens of thousands through the streets of Suez. It was reported from Port Said that ‘the whole town is on the streets’. Indeed in every major town of the country, there are demonstrations.

Western media reported that protesters are split between those who demand a kind of ‘second revolution’ and those who support the elected parties like the Muslim Brotherhood. Yes, there are a lot of different currents in this movement, but one thing was shown on 25th January in an overwhelming way: Egyptians are not tired of their revolution and they are still willing to demonstrate for what they fought for one year ago. 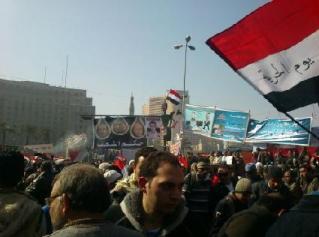 A celebration but revolution has a long way to go

Ahram Online, a major news agency in Cairo, reported that “the streets in downtown Cairo are packed with people, many chanting against military rule. People sitting in street cafes are joining in with the charged atmosphere against the military rulers”.

The Muslim Brothers called their members to go back home on the evening of 25th January, to demonstrate that they would not support a re-occupation of the square, as it is proposed by the ‘revolutionary youth’. But by 7 pm, the square was still bustling with people, with no sign of an end. On the contrary, more demonstrators were still arriving.

The so-called ‘Salafists’ â€“ more hard-line political Islamists – were reportedly thrown out of several demonstrations by angry youth, most notably in Alexandria. In Midan Tahrir, Cairo, I saw just a few obvious Salafists. During the evening of the 24th, there were a couple of hundred shouting, “Allah Al Akbah”, for a few minutes. But a huge roar, ‘Down with Tantawi!’, showed what the vast majority of protesters were marching for.

The 25th January anniversary mood in Cairo was one of celebration but it also seemed clear to most of the people that the revolution has still a long way to go. The next step in view of many is to get rid of the military rulers, who are trying to salvage as much of the old regime’s privileges as possible. But social issues, like jobs, homes, healthcare, as well as questions like, ‘Who elected my boss?’ or ‘Why didn’t we elect our managers’, increasingly come to the fore.