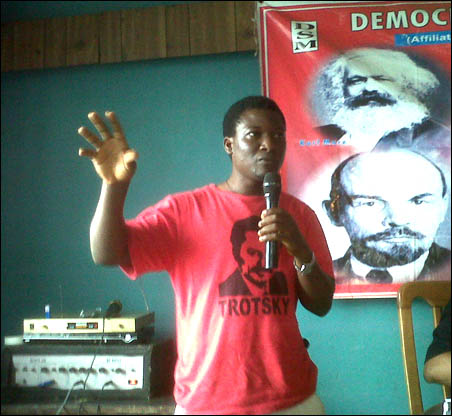 The Education Rights Campaign (ERC) condemns attacks on democratic rights at Rochas Foundation College Ibadan Oyo state. Particularly we condemn the sack of Mr. Abiodun Bamigboye who was a biology teacher at the college.

Mr. Bamigboye was sacked after serving a 2-week suspension for speaking out against sharp practices in the preparing of salary vouchers and other fraudulent practices of the management of the college. We demand his immediate recall, payment of all his outstanding salaries and the prosecution of the Principal of the College Mr. T.O Alamu and the Accountant Mrs. Perpetual Iruanya for corruption and sharp practices.

However, one of the formal reasons put in the official letter of termination of his appointment is that he usually organizes socialist lectures to indoctrinate the students of the College. This shows that in addition to his persecution for being a whistleblower of an institutional fraud he is also being victimized for his political belief and activities as a socialist. Mr. Bamigboye, also known as Abbey Trotsky, is the Coordinator of Democratic Socialist Movement (DSM) in Oyo state and played a key role in the recent struggle of the state public workers for the implementation of the new minimum wage, though he works in a private school. He has already initiated discussion with the leadership of the Nigeria Union of Teachers (NUT) in the state on the need to unionize teachers in the private schools.

Mr. Bamigoye’s travails started when he complained against the practice of preparing salary vouchers with pencil while members of staff are made to sign with pen. When his complaints were not heeded by the principal and accountant of the college, Mr. Bamigboye stopped signing vouchers in protest and for this, his salary for the month of August 2011 was withheld by the school management.

This however is just a small part of the web of corruption and fraud being practiced at Rochas Foundation College, a supposedly reputable philanthropist foundation founded by Rochas Okorocha, the Governor of Imo State with his wife as the Foundation’s president.

Other areas of dispute between Mr. Bamigboye and the School management are the corruption and fraudulent practices of the Principal, Mr. T.O Alamu in collusion with the Accountant Mrs. Perpetual Iruanya. The College Principal alongside other main officials of the management regularly inflate number of candidates for SSCE examinations in other to get more money from Mrs. Okorocha; the President of the Foundation, to share among themselves. In April 2011, Mr. Bamigboye courted the hatred of the Principal by refusing to inflate the number of science students as requested by the Principal.

Equally the Principal in collusion with others regularly collects forms for November/December NECO and WAEC examinations for students of the college at inflated prices. This is aside the fact that fowls bought by biology students of the college for practical examinations are usually carted away and shared amongst the Principal and the Accountant despite protest by teachers most especially the biology teacher, Mr. Bamigboye.

More worrisome is that Mrs. Okorocha, being the president of the foundation and the management of Rochas Foundation International, seems to approve the sharp practices of using pencils to prepare vouchers going on at the college. Despite Mr. Bamigboye’s repeated petition and phone calls to the Foundation’s President and Vice President explaining the unethical character of such practices, the Foundation turned a deaf ear. Instead, Mr. Bamigboye was sacked and when he went to the college on October 5 to pack his personal effects from his office, he was arrested and detained at Iyaganku police station, Ibadan, at the instance of the school Principal.

From all indications the train of fraud does not end at the Principal’s table but goes directly to the top of Rochas Foundation International. It means logically that the Foundation shortchanges its teachers who are paid a mere N30, 000 (they were paid N25, 000 before) while presenting to foreign donors different salary vouchers bearing higher salary figures. Indeed the teachers of Rochas Foundation College have neither appointment letters nor conditions of service. This is in contravention of labour laws and other laws of the country. This also means they have no trade union rights and are mere casual slave labourers in the vineyard of Rochas Okorocha.

The ERC calls on the founder of the foundation Rochas Okorocha and the Foundation’s management to immediately reverse the criminality going on at the college. The ERC will not condone putting teachers and students under conditions of slavery under the guise of philanthropism. We are prepared to begin mass picketing of the Rochas Foundation College unless the following demands are met:

(1) Immediate recall of Mr. Abiodun Bamigboye and payment of his outstanding salaries

(3) Regularization of staff’s employment with letters of appointment and conditions of service in consonance with labour laws.

(5) Democratization of the management board of Rochas Foundation College with involvement of elected representatives of teachers, students and parents to prevent sharp practices and corruption.