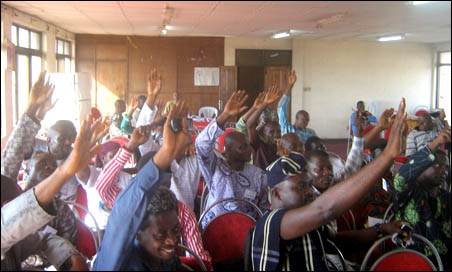 Saturday and Sunday, 8 and 9 October 2011, saw the Joint Action Front (JAF), the civil society partner of the Nigeria Labour Congress (NLC) and the Trade Union Congress (TUC) in the Labour and Civil Society Coalition (LASCO), hold its second delegate congress.

The JAF was formerly known as Joint Action Forum but changed its name to Joint Action Front (JAF) at this congress. From its first congress on November 23rd 2004, JAF was built as a coalition to fight alongside the trade unions to fight against neo-liberal attacks. With its slogan “regime change is our objective, mass struggle is our vehicle, system change is our goal”, JAF members from inception and through LASCO conducted mass struggles and strikes against fuel price hike, attacks on the minimum wage and other anti-poor policies.

However the absence of the trade unions and LASCO advancing a clear working class political alternative to government neo-liberal policies meant that the gains of such strikes and mass struggles could not be sustained over a long period of time. In addition, the working class and poor masses became politically weakened by the absence of a working class political party and the inability of the trade unions to build the Labour Party (LP) as a vehicle for take-over of political power from the corrupt capitalist ruling class. 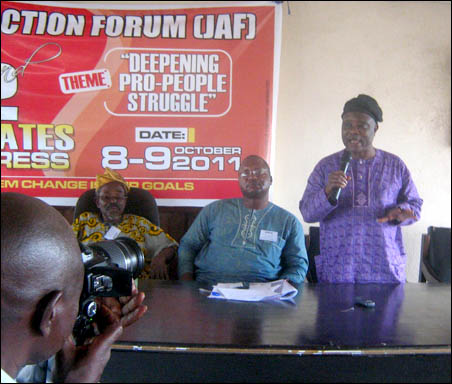 The objective of this second delegate conference was to further define JAF ideologically and politically so as to be more effective in campaigning both independently and with the trade unions to fight uncompromisingly against all neo-liberal policies and for a revolutionary change of society. Over 70 delegates and observers from socialist organizations and civil societies attended the congress between the two days. Segun Sango, the General Secretary of Democratic Socialist Movement (DSM) who was one of the speakers at the opening session was also the chairman of the business session of the two-day Congress.

Debates took place mainly around issues of the political orientation of JAF, programme and its relationship with the trade unions. It was resolved that JAF must be opposed to all anti-poor and neo-liberal government policies. JAF must also campaign for the building of a mass working class political party to take political power. Equally while maintaining relationship with the labour leadership through the LASCO; JAF must also simultaneously conduct campaigns among rank and file workers for democratization of the trade unions and building them as fighting platforms for workers’ rights. 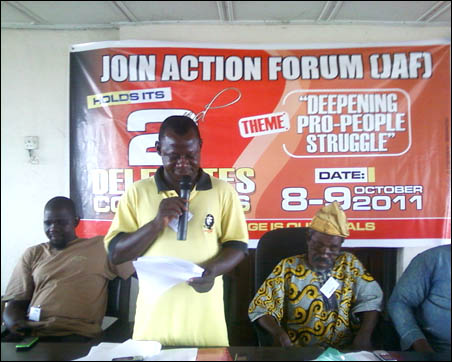 At the end of the congress, a seven member National Working Committee (NWC) was elected, with DSM member Peluola Adewale (Pelad) as the national mobilization officer while Dipo Fashina and Abiodun Aremu were returned as the Chairperson and Secretary respectively. Equally a constitution and programme was adopted. The congress also adopted motions for JAF to conduct solidarity campaigns for Airtel Nigeria workers, Dangote Pasta workers as well as striking oil workers and repressed socialist activists in Kazakhstan. The newly elected officers were also tasked to ensure that the forthcoming local council election in Lagos state is held in full compliance of democratic processes and relevant laws.