Famine – another weapon of mass destruction 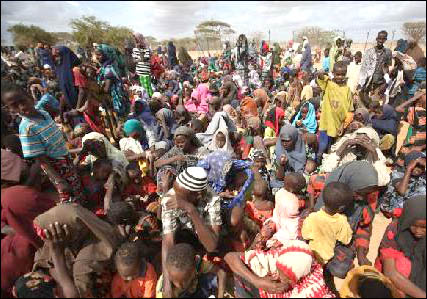 Once again, famine is sweeping the African Continent. Once again, horrendous pictures of starving children, dying in their hundreds every day in the Horn of Africa, are coming out. Once again, the brutality of the present system is being graphically exposed. While speculation on food supplies brings enormous profits to a handful of giant financial actors, hunger, disease, misery and death spread like wildfire among some of the poorest populations on this earth.

North East Africa is suffering from its worst food crisis in decades. In Somalia, tens of thousands of people have already died in the last few months, over half of whom were children. And famine continues to spread: four million Somalis are in a situation of food insecurity. The lives of over 750,000 people are directly threatened, according to latest UN estimates. This is more than double the number which died in the early 1990s during a previous famine in the region.

Hundreds of thousands of people are on the move, some walking for weeks and covering hundreds of miles in a desperate search for relief, on what have been called the “roads of deaths”. Al Jazeera recently reported that “hundreds, perhaps thousands, continue to brave the desert, feeding roots of trees to their children, begging for water and hiding from bandits as they look for a place to just live.”

In Mogadishu, Somalia’s capital, there are already half a million refugees, while 135,000 Somalis have fled their country since the beginning of the year. Every day, there are thousands crossing the border with Ethiopia and Kenya. The refugee camp of Dadaab, in North East Kenya, is now the biggest refugee camp in the world. The camp is only supposed to house about 90,000 refugees, but by July 2011 it was already host to more than 440,000. 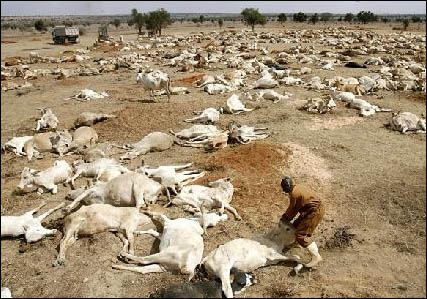 To add insult to injury, diseases such as cholera, malaria and typhoid have begun to spread. This is most notable in displaced persons’ camps, where people have congregated in the hope of getting some aid. Aid organisations predict that the drought will end in October with the wave of rainfall traditionally expected at this period, but even heavy rains would only allow a production far below the real needs. Moreover, rainfall will dramatically increase the risk of waterborne and infectious diseases.

The catastrophe has been sharply intensified by the continuous state of war and the general disintegration of Somali society. Somalia is torn apart because of a complex power struggle engulfing the whole country. The Somalian government is weak and corrupt and its authority does not extend far beyond Mogadishu. There are also numerous warlords, Islamist groups, clan-based militias, pirate gangs and proxy forces armed by foreign governments. US imperialism is intervening in the situation as well.

Gunmen from Al-Shabaab, an Islamist group which is in control of much of Southern Somalia, have prevented starving people from fleeing drought affected areas, even broken up refugees camps to send thousands of starving people straight back into these zones. In the areas controlled by the US-supported transitional government in Mogadishu, some corrupt officials and businessmen are stealing the aid to sell it back at inflated prices for their enrichment. Some estimate that up to half of food aid deliveries could have been stolen to be resold in the capital.

“Something has gone wrong somewhere”

The idea that the ongoing famine in the Horn of Africa is the result of “natural causes” is a deliberate attempt to throw dust in people’s eyes. It is true that the Horn of Africa is a region prone to severe droughts, but this is a not new phenomenon. In the past droughts were occurring every 10 to 15 years. But climatologists have shown that climate change is making them much more frequent and more intense. The mass, global destruction of the environment caused by the drive for profits is to blame for the exacerbation of these droughts, which are particularly devastating for a population who are heavily dependent on agriculture and livestock.

After each famine, we hear lots of declarations pledging that “this must not happen again.” So why is it still happening then? This is the question that the super rich and their apologists don’t want us to ask. They put all their efforts into deflecting blame from the capitalist system which on the one hand has the ability to produce enough food for 12 billion people and on the other, creates a situation where a child starves to death every 5 seconds. As the left-wing Brazilian bishop Helder CÃ¢mara once said “When I give food to the poor, they call me a saint. When I ask why are they poor, they call me a Communist”.

A recent report published by the International Federation of Red Cross and Red Crescent Societies said hunger existed “not because there was a lack of food globally but because of poor distribution, wastage and rising prices that made food unaffordable”. One of the Red Cross spokes person commented that “If the interplay of market forces has produced an outcome where 15% of humanity are hungry while 20% are overweight, something has gone wrong somewhere.”

Indeed, something has gone wrong. Today’s science, techniques and resources are fully capable of avoiding such catastrophes. As harsh as droughts in the region can be, their horrendous consequences are only a product of the capitalist system we live in. This is especially the case in a crisis-ridden and war-ravaged country such as Somalia, with dire poverty and dramatic lack of the most essential services and infrastructure.

The sharp hike in food prices in the recent period has contributed to making the crisis much more acute. The magnitude of these price increases exceed even those seen during the food crisis of 2007-2008. In the South of Somalia, grain prices have risen by 240% compared with last year. In neighbouring Kenya, in only one year, corn prices rose by 160% and wheat by 169%. Overall, food prices in the region are three times as high as the normal, making these goods inaccessible to much of the population.

In February, a World Bank report showed that an extra 44 million people worldwide had been pushed into poverty as a result of rising food prices since June of last year.

The massive speculation on food commodity markets has played a decisive role in this. Never before has so much cash flowed into financial transactions involving agricultural commodities. Investment banks like Barclays Capital or Goldman Sachs generate hundreds of millions dollars a year through gambling on the price of key commodity crops like coffee, sugar and wheat, literally playing with the lives of millions.

International aid has been pledged to Somalia. However, as usual, only part of this promised aid has actually been delivered. Moreover even the total amount of aid pledged is completely insufficient to cope with the scale of the catastrophe. These pledges have much more to do with a cynical attempt from the imperialist powers to pretend to “do something” than with a serious commitment to solve the problem. If even a fraction of the mountains of cash injected into the banking system since the beginning of the economic crisis had been allocated to combat hunger and poverty around the world, this famine would not have even happened in the first place.

The UK government had promised the equivalent of 59 million euro to help with the crisis in East Africa. However, this amount equals less than 0.006% the cost of its bank bailout package. France has pledged 10 million euro, but has already spent 32 times that amount on its military intervention in Libya in a matter of months. As in every catastrophe, we have seen how generous working people are in their response to the appeal. This is especially the case given the severe attacks on living standards which are taking place in the Western world and stands in stark contrast to what the capitalists and their governments are ready to do.

As important as people’s small donations could be to help with the immediate effects of such a drama, a fundamentally structural response is needed. About 80 countries in the world are experiencing a situation of ‘food shortage’ at the moment. Famine and starvation in the modern world have nothing to do with nature or food scarcity. On the contrary they have everything to do with a system in which investment decisions are made on the basis of what will provide immediate private profits to a few big players who control the world’s economy. More than ever, it is time for system change.