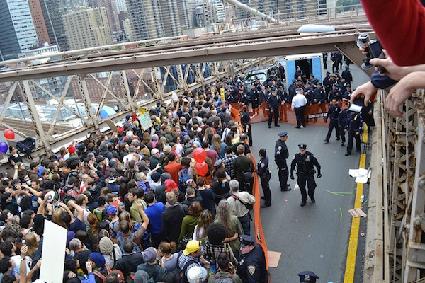 Last Saturday, the New York Police Department (NYPD) arrested over 700 protesters on the Brooklyn Bridge, as ‘Occupy Wall Street’ started its third week of action. This anti-corporate occupation movement, which has now spread to dozens of cities around the US, is highly energetic and is gathering more support from unions and the wider public and attracting new activists.

Members and supporters of Socialist Alternative (CWI supporters in the US) participated in Saturday’s events, gathering on Saturday morning at Liberty Plaza (Zuccotti Park). Just a day earlier the occupation had drawn an after-work crowd of nearly 2,000. At the plaza, speeches were made, “working groups” operated, and a ‘General Assembly’ took place. Many new people joined after they saw the police crackdown on demonstrators just a week earlier (see our previous article on socialistworld.net) and felt that they had to take part in the movement.

We received a lot of support from participants and passers-by. With the signs, “Join the Socialists” and “Wall St. Has Two Parties, We Need One of Our Own!” on our table, many people came to hear “what the socialists have to say.” We also had the recent issue of Justice, our newspaper, some Marxist literature, a leaflet we produced for the occupation, and our banner, saying “Jobs Not Cuts! End the Dictatorship of Wall St.!” We were talking with people, putting forward our ideas, selling our materials, and signing up new contacts.

The mood at the plaza was fantastic. The dedication and discipline of the movement is admirable. The police do not allow tents, so we’re using sleeping bags and mattresses. They don’t allow bullhorns, so we’re using “human microphones.” There’s a kitchen, a library, a media centre, a cleaning team and medics.

The march began with a rally and general explanation of purpose; ending big banks’ dictatorship over politics and everyday life, as well as a clear outline of the planned route and peaceful nature of the protest: “This is a peaceful protest,” was chanted in unison. The march then started to move just after 4 p.m. with about 1,500 protesters leaving the encampment at Liberty Plaza, moving in organized fashion up through New York and onto the Brooklyn Bridge. While a majority of us were youth, students and young workers, there were a number of older activists and long-time union members involved, accompanied by a sizeable police presence.

There was a militant mood and sense of common cause, if somewhat vague, even though we were denied street access and marched along the wide sidewalk. Chants included:

“How do we end this deficit? End the war! Tax the rich!”

“Banks got bailed out, we got sold out!”

Traffic was blocked at several points. Suited men in their private cabs looked at us with annoyance, but a number of passers-by waved and honked in support, and a few joined the march. As we headed past City Hall Park and onto the Brooklyn Bridge ramp some confusion emerged. Do we go over the pedestrian boardwalk in the middle or take the street? A large group had already taken the street and was heading forward, despite attempts by some activists to call people back onto the footbridge.

It was later revealed that the NYPD had allowed a large contingent of marchers to head onto the street, escorting them on one side and stopping traffic. But about a third of the way across the bridge, the protesters who were led onto the bridge by the police under the impression it was the main march route, ran into a wall of cops with orange nets. Confusion set in, a standoff ensued, and eventually another wall of police officers closed off the rear path of retreat for the protesters on the street.

Those of us on the footpath directly above were able to watch this all unfold. We chanted in unison with our brothers and sisters “Let us march! Let us march!” Then out came the plastic handcuffs. Hundreds of them! One by one, the large, burly crew of mostly white-shirted police officers started randomly pulling peaceful protesters from the column and arresting them. In one case, three large policemen yanked a small pre-teen girl from the front of the crowd and tightened the plastic cuffs behind her back.

This went on for over two and a half hours, from front and back, as cops methodically picked each and every one of the more than 700 people out of the column, handcuffed them and left them sitting along each side of the bridge with backs to the wall. The police had also set up a block at the entrance to the bridge, which trapped hundreds of people. The New York Times reported that early in the afternoon 10 police buses, which hold up to 20 people, were dispatched from Rikers Island. This was a clear indication that the police were planning mass arrests from the start. One cop stood “guard” for every five handcuffed people on the ground. The group on the footpath was also antagonized by police and had their rear path of exit blocked.

Clearly, this was a deliberate attempt by the NYPD to break up the now two-week protest in defiance of the banks. It has emerged that the NYPD recently received a $4.6 million “donation” from JPMorgan Chase bank. 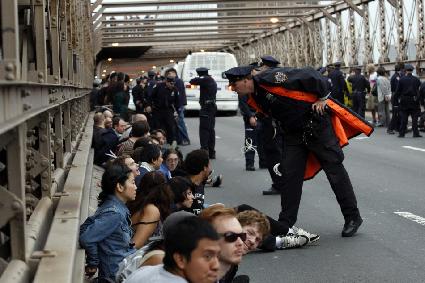 So far, the completely unjustified repression has failed to break the spirit of this developing occupation movement. It has mainly evoked widespread sympathy for the struggle, both in the US and internationally, as people see youth exercising their democratic rights and standing up to Wall Street and the ruling establishment. On Wednesday, 5 October, there is a march planned from City Hall to Wall Street in support of the occupation that will include unions and community organizations.

Occupy Wall Street has opened the door to the idea that there is a way to fight back and have our voices heard. The potential to build a wider social movement is clearly illustrated by the sympathy and deep anger this action has tapped into. There is a limit to the cycle of occupy, march, get arrested, and continue occupying. Therefore, there is a burning need to immediately develop a strategy and programme for building the wider mass movement.

More analysis and commentary on www.socialistalternative.org (Socialist Alternative, CWI supporters in the USA) and www.socialistworld.net (CWI)