Below is the text of the leaflet that the New York City branch of Socialist Alternative (CWI supporters, USA) has been distributing at the Occupy Wall Street protests

End the Dictatorship of Wall Street!

All around the world attention has been drawn to the occupation of Wall Street. The protest has captured the imagination of thousands and inspired new occupations which are spreading across the U.S.

The police crackdown last Saturday, intended entirely to intimidate this movement, completely failed to break our spirit. Now the youth in particular are more determined than ever to fight. Inspired by the revolutionary upheavals in Egypt and across North Africa, as well as the mass youth occupations of central plazas in Spain and Greece, protestors have taken to the streets of New York to stand up to the domination of Wall Street and Big Business over our lives.

Below the surface there is deep anger in U.S. society which only seemed to be getting a twisted expression in the right-wing lunatics of the Tea Party. But the mass movement in Wisconsin this spring, and now the youth occupation of Wall Street provide a glimpse of the enormous potential to turn that anger into a progressive social movement.

Occupation is not enough 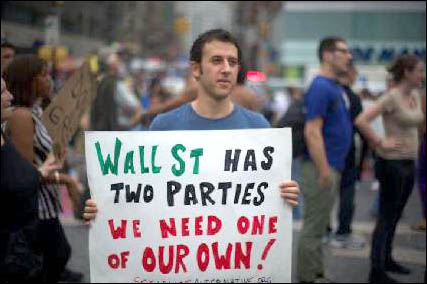 How can we take the struggle forward? Many are occupying to “liberate space” in order to build a new, more equal and just community, hoping it will inspire others to follow. While the occupation is a certain example of a community based on democracy, cooperation and solidarity, unfortunately, the occupation alone will not be enough to build a mass movement capable of changing society.

Many have alluded to Egypt saying that a growing occupation with one basic demand is how the dictator was overthrown. But in fact, the situation was more complicated than that. In the week before Egypt’s dictator Mubarak was ousted, the working class entered the scene with decisive industrial strike action paralyzing key parts of the economy. This is what really scared the ruling elite.

The occupations in Spain and Greece have been much bigger than Wall Street, but they, too, need the more powerful forces of the working class to move into action in order to win. In Wisconsin, a huge occupation of the Capitol lasted for over 3 weeks that was at the center of mass demonstrations of the workers and youth. They could have won if that movement had moved toward a general strike of workers to shut the state economy down.

Instead the Wisconsin battle was consciously derailed by the Democratic party and the top union leadership behind a campaign to recall the Republicans from power to elect Democrats in their place. However, the Democrats, like the Republicans, are a party of Wall Street and Big Business, and they offer no solutions. We need an independent struggle which seeks to draw in the widest layers of workers and youth. United we have the power to withdraw our labor, stop “business as usual,” and hit the banks, corporations and ruling elite where it counts.

We need to build up the confidence to take such bold measures. That’s why Occupy Wall Street should call for mass demonstrations around key demands that address the burning issues that working people and youth face like jobs, education, healthcare and so on. The youth have a vital role to play. In Britain, Chile and Wisconsin, and other struggles it was the youth coming into the streets first and taking action that emboldened people, opening the door for much wider struggle of the working class.