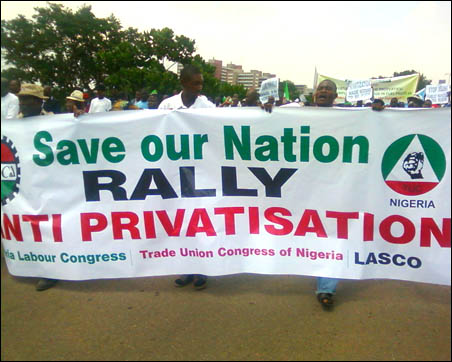 Protesting intensified attacks on the living conditions of Nigerians by Jonathan government, the Nigeria Labour Congress (NLC) and Trade Union Congress (TUC) organized a rally on Thursday September 22 in Abuja, Nigeria’s Federal capital. The protest march tagged “Save the Nation Rally” was meant to protest neo-liberal policies of privatization, deregulation, planned increase of pump price of fuel from N65 to N190 a litre and about 200% increase in electricity tariff.

Some of the placards and banners at the protest expressed sharp rejection of privatization policies. A homemade placard read, “Privatize and lose your sleep!” Other slogans at the protest were “biggest oil exporter, no petroleum for Nigerians”, “Nigeria not for sale”, “nationalization under workers democracy”, “stop robbing the poor to pay the super rich”, “no to jumbo salary for politicians” etc.

A postal and telecommunication employee union member from a major private telecom company, Airtel, brought to the protest the demands of telecom workers: “Say No to 60% pay cuts and other benefits, casualization and contract labour, hazardous workplace (No insurance), proposed child labour in Nigeria”. This alone reveals the series of workplace attacks on living conditions and workers’ rights going on in the private sector which underlines why the working masses must resist privatization of public enterprises.

The National Union of Electricity Employees (NUEE) which has been long protesting the planned privatization of the public electricity company (PHCN) was also active at the rally with a banner denouncing privatization as evil.

The DSM intervened at the protest where we sold 137 copies of our paper – Socialist Democracy (SD) – in which we called on Labour to pull out of the National Council on Privatization, organize a 48-hour general strike and demand nationalization of key sectors of the economy under workers control and management. Among the DSM delegation to the protest were two comrades from a branch recently opened at the Federal Polytechnic Bida, Niger State. 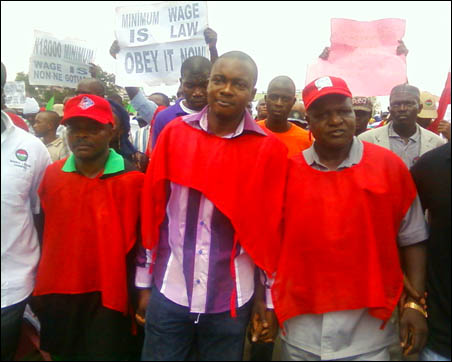 However, the protest, which had about 1, 500 people, was about the worst outing of Labour for a long while in terms of turnout and organization. The reason adduced by the President of NLC, Abdul Wahed Omar, for the low turnout betrays the reluctance of Labour to confront the government. According to Omar, Labour consciously mobilized few people for the protest because of the state of insecurity in the country heightened by the recent activities of Boko Haram. Such a statement coming from a Labour leader is disturbing and demoralizing. This much also was expressed by many protesting workers who left the rally in disgust.

If such a mindset prevails, the situation could degenerate into the freezing of mass activities by Labour. This is because the logic of the NLC president’s statement is that a suicide bomber could lurk among the protesters. It was the same excuse of security challenge that leadership of National Assembly gave to deny the protesters access to the national assembly complex. In fact such statement could inadvertently embolden the government to outlaw mass activities ostensibly citing security threats and mount a crackdown on mass protest. 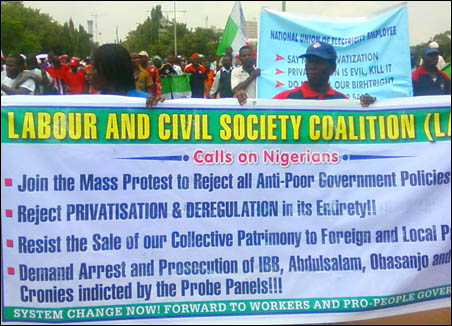 It is also unfortunate that the protesters were led to spend much more hours at the National Assembly struggling and agitating with security operatives who refused them entry into complex than on the streets which should have been the primary target of the rally. The action became so disoriented that the protest started thinning out as people left in droves out of anger without waiting for a formal closure of the rally. Besides, there was no opportunity for speech making to sensitize workers and people at the rally and also to raise suggestions on how to take the struggle to the next level.

The intensification of attacks on the working people with planned increase in petrol price and electricity tariff at a period when most state governments have refused to fully implement the new national minimum wage has called for a much more serious response from the Labour leaders. The strikes that have broken out in many states across the country over the national minimum wage have further underlined the need for a general strike with mass activities nationally.

We of the DSM have been repeatedly calling for a 48-hour warning general strike with mass activities. It appears the labour leadership is not prepared for it. Indeed, the NLC in the leaflet circulated at the rally scandalously stressed that “the Labour Movement has strived to avoid strikes over the Minimum Wage”!

It is also unfortunate that the protest was used to further sow illusions in privatization exercise. Although, one of the banners at the rally had on it a bold inscription: “Anti-Privatization”, as far as the trade unions leaders are concerned, there is nothing wrong with the privatization as a policy but the process which is fraudulent. The impression was created that once the culprits of previous privatization exercise are brought to book and the exercise is conducted with due process, then all would be well with privatization.

As we have consistently stated privatization is inherently fraudulent because it is driven by greed and profit-first agenda that is characteristic of capitalism. This accounts for why private banks, both locally and internationally, some of them global brands, have either collapsed or continued to exist as a result of the bail out with public funds.

Labour’s half-hearted opposition to privatization is counterproductive. Workers of the Power Holding Company of Nigeria (PHCN) who have been at the forefront of the struggle against privatization of the energy sector are opposed to every aspect of privatization and not just the process. So also are the workers of the NITEL who know for sure the real horrors of privatization. Because of Labour’s weak opposition, several public companies have been successfully sold off at rock-bottom prices with brutal consequences for the jobs and conditions of employees at the same time as giving nothing to the vast majority of Nigerians.

The scandal of corruption surrounding the sales as well as the non-functioning of 80% of the privatized companies years after their sale has even forced the Senate to begin a probe in order to hold off public anger. This is why we call on Labour to pull out from the National Council on Privatization and spearhead the formulation of a working people economic alternative to challenge the anti-poor, neo-liberal capitalist program of the government. 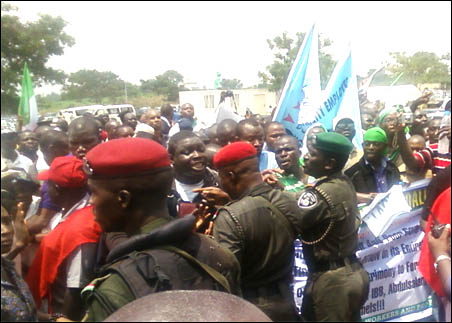 By and large, the unending attacks on the living conditions of Nigerians are supported and unleashed by the governments at all levels irrespective of the political parties. This is one of the reasons we have called on the Labour leadership to initiate the process of the formation of a working peoples’ political alternative armed with a socialist program to contest and wrest political power in order to put the commanding heights of economy under the public ownership with democratic management and control by the working people. This will ensure that there are adequate resources to guarantee the provision of basic needs and social service as well as requisite infrastructure development without bureaucratic strangulation and corruption which is characteristic of both capitalism and Stalinism â€“ the system practiced in the now defunct Soviet Union and other states that falsely claimed to be socialist but were in fact a parody of what socialist society genuinely would be.