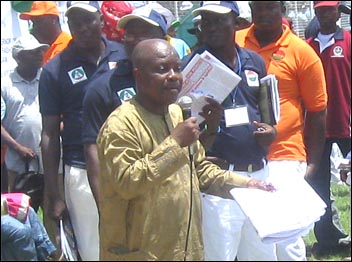 This year International Workers’ Day was, unfortunately, another usual jamboree for workers on May 1 in Nigeria. The essence of the event as the day to put forward the demands of workers for improvement in living and working conditions has been lost on the trade union leadership. Though top on the concern of workers was the issues of minimum wage which was just signed into law a just prior to the last general elections, the Labour leaders chose only to offhandedly demand its implementation. This is apparently not to spoil their merrymaking and social partnership with the federal and state governments which have defined the May Day events in the country. Most Labour leaders choose the day to cement their relationship with these governments with expectation or demand for more largesse from the state coffers.

For instance, in Delta state, South-south Nigeria, while the state chairman of the NLC passively mentioned non-implementation of minimum wage and casualisation in the Council for Arts and Culture, the thrust of his speech was to congratulate the state governor on his re-election and thank workers for helping return the governor to office. According to him, “one good term indeed deserves another”. He then followed with appeal to government to buy vehicles for industrial unions and affiliates, and that the government should ensure the sustenance of the current mutual relationship with labour stressing, albeit shamelessly, that the government should remember that the rule of the game is “you scratch my back, I scratch your back”. This was the general trend across all the states where DSM comrades intervened.

Notably, while some workers whom we spoke with in Delta expressed indignation at the unholy romance between labour and government, they simply saw May Day as their own avenue of benefitting from their union dues. The trade unions actually pay workers who participate in May Day events some money in addition to other material benefits like food. 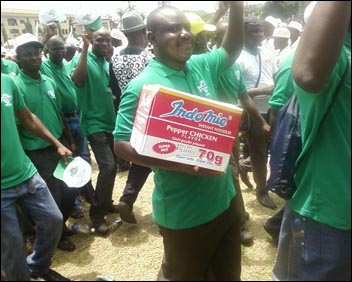 The main feature of the May Day was seeing different contingents of workers dressed colourfully in the choice colours of their unions while marching gaily in scorching sun, like battalions of soldiers, to the admiration of a government representative. In Abuja, where there the central “rally” was jointly held by the two trade union federation, NLC and TUC, it was Vice President of Nigeria who received the “salutes” of workers. In most of the states where we participated there was no union carrying placards or banners with any demand centred on living and working conditions. What was rather commonly seen was workers displaying of products of the companies who apparently gave some money to the union leaders to mark May Day. However, in Lagos a worker with Lagbus, an operator of the BRT (Bus Rapid Transit) scheme which the state government supports with public resources for private profit as part of Public Private Partnership, managed to raise a placard that denounces the dehumanizing working conditions in the company with inscription: “Stop Modern Slavery in Lagbus”.

Also in Osun state, some teachers were seen while on the march past, chanting the slogan: “minimum wage, N18, 000” which was echoed by numerous other workers. Incidentally, those that led the slogan chanting were the same workers whom we had seen earlier discussing on how to negotiate with state government for at least N15,000. This was because, according to them, not all states have the capacity to pay N18,000. But then DSM comrades discussed with them and sold our paper, Socialist Democracy. No doubt, the consciousness and confidence of these workers were aroused from reading the paper with a front page article calling on workers to fight for the immediate implementation of N18, 000 minimum wage. 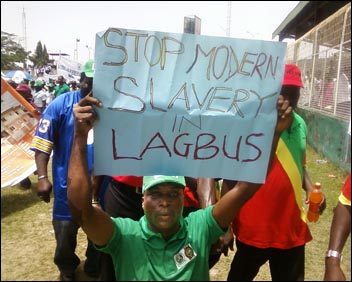 Were there a fighting trade union leadership then this May Day would have been used to put forward the demand for implementation of the new minimum wage with a notice of mass action against any government that proves recalcitrant. In many states across the federation, there is the apprehension that the state governments hiding under “true federalism” and complaints of unjust allocation of resources from the federation account may not want to pay. But, unfortunately, there is little trust in the state leaderships of the trade unions to fight consistently for the payment of the minimum wage.

However, while in most states the labour leaders were apparently on their knees begging their governments to implement the minimum wage, at the national level the NLC opted for strong words. The president of the NLC, at the central “rally” in Abuja, called on workers to “sack any state government that refuses to pay the newly approved N18, 000 National Minimum Wage”. However this is merely blowing hot air. Labour did not sack those governments when it had the opportunity in April’s elections by building a virile working people’s political alternative to contest power. Instead the Labour leaders opted for the role of umpires aiming to create a level playing ground for different sections of the thieving ruling elite fighting for power. The Labour Party that the NLC helped establish was handed over to anti-poor politicians and wheeler-dealers for their own self-serving interests.

In Lagos state, the nation’s commercial capital, there was no demand on minimum wage by the labour leaders but an appreciation of the state government for already implementing the new minimum wage. Lagos has a reputation for razzmatazz but a deceptive activity, hence the appellation, “Eko for Show”. Eko is the indigenous name for Lagos. The government has opted for subterfuge in the implementation of the new minimum wage. It pays N18,700 to the least paid worker, of course more than the N18, 000 national minimum wage, but short changes those higher up. While it appears the state pays more than the new national minimum wage, in reality most workers in the state would find out they receive less than their counterparts in some states which pay N18,000 or even less. This is not unprecedented, as it is the same with the implementation of last minimum wage in which Lagos paid N7,500 as against N5,500 in virtually all other states.

The solidarity speech of Segun Sango, the General Secretary of DSM, in Lagos to the massive applause revealed that workers were not comfortable with the handling of the minimum wage in the state. He argued that with jumbo pay of the top government functionaries that no state government has an excuse not to pay the new minimum wage, and called on workers to be prepared to fight for full implementation. He also added the labour must always demand that no worker should lose his or her jobs on account of implementation of the minimum wage. This is point is very instructive particularly in Lagos. It should be recalled that in 2001, a few weeks after the announcement of implementation of the minimum wage following a series of strike and mass protest, thousands of workers were sacked by the then Lagos state administration of Bola Tinubu. 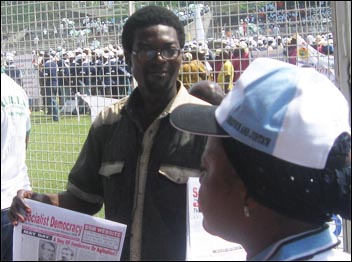 Already, despite the flawed character of the minimum wage in Lagos state, the current state governor, Raji Fashola, hinted that the state could not sustain the payment unless there is a change in distribution of nation’s revenue among the three tiers of government (federal, state and local) which presently massively favours the federal government. The revenue allocation formula is also excuse of most state governments who have not started implementing the minimum wage.

Some of the governors like those of Osun, Ekiti, Ondo, Delta and Edo states, who promised to pay the minimum wage, also asked for a review of the revenue formula and called on Labour to join the demand in order to be able to sustain the payment. Significantly, however, it was only Edo state governor Adam Oshiomhole, a former President of NLC, who categorically stated when to commence the payment. It is imperative for workers in all the states including those that have given indication to pay to prepare to struggle to compel the governments to ensure full implementation without retrenchment of workforce.

While the argument that the revenue allocation formula is favourable to the central government is correct, it must not be bought by workers as an excuse to deny them the new minimum wage. By scaling down of the salaries and allowances of political office holders, as the NLC President stated in his speech, there would be more public resources freed up to meet the obligation of government like minimum wage and social services. Besides, the unjust allocation formula has not prevented the top functionaries of state governments to earn outrageous pays and retain a large army of hangers-on on public resources.

Besides the issue around the minimum wage, the national Labour leadership also publicly criticized the neo-liberal capitalist philosophy of the market albeit without presenting a well articulated working class alternative. Of course, doing that would have meant the Labour leadership supporting the socialists’ call for public ownership of key sectors of the economy under working class control and management and a socialist running of society for the benefits of all, unlike the present situation wherein society is run for the profit-interest of a few. However for many Labour leaders in Nigeria, socialism is either ‘impracticable’ or a song of the distant future. 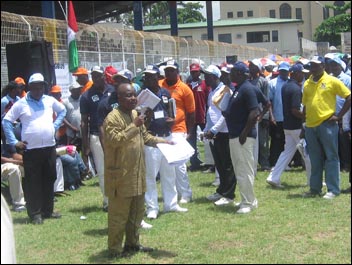 DSM comrades intervened in May Day events in nine centres across the country namely: Abuja, Lagos, Osun, Oyo, Ogun, Ondo, Ekiti, Delta and Edo states and sold 991 copies of May/June issue of “Socialist Democracy”. We found that of much interest to workers were the articles on the history of the May Day celebration which pointed out the root of May Day in the 8-hour working day movement and the one on minimum wage which calls on workers to prepare to fight for its implementation. Also, a working woman who saw the article on the 2011 elections and promptly agreed with a caption under one of the pictures: “free and fair elections but same anti-poor candidates”. It appeared the woman, most likely as other conscious workers, had reached similar conclusions about the April 2011 elections.

However, unlike last year where, along with some socialists and trade union activists, one of our activities in May Day intervention was mass mobilization of workers into Labour Party, we could not do the same this year. The potential of Labour Party to attract workers and serve as a working people’s political alternative has almost been eroded with huge number of anti-poor politicians who have become the faces of the Party and the heavy commercialization of the Party by its “cash and carry” leadership. Besides, the Party has never articulated any policy or program that is different from those of the main pro-establishment parties: PDP, AC, etc. This explains why it could comfortably endorse President Jonathan with his anti-poor neo-liberal capitalist programme at the last general elections. In most of the articles in the paper sold at the May Day we boldly reiterate our call on Labour to reclaim the Party as the NLC has promised to do at its last Delegate Conference or commence the process of building a mass fighting working people’s party.