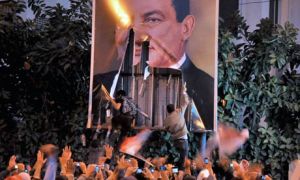 Mass protests spread across Egypt following today’s Friday prayers, demanding an end to Hosni Mubarak’s 30-year presidency. Demonstrations took place in Alexandria, Suez, Mansoura, Sharqiya and Cairo. In many cases, clashes occured between protesters and police. Police deployed tear gas, rubber bullets and live ammunition. In areas like Alexandria and Suez, the movement reached insurrectionary proportions, with police and security forces retreating from parts of the cities in the face of mass resistance.

These are the largest protests since the ‘food riots’ in 1977, when the Sadat regime was forced to lower food prices, as well as stepping up repression. But today’s movement is on a much greater scale.

Protests on Thursday saw demonstrators attempting to set fire to a local office of the ruling National Democratic Party. There were reports earlier this week of attempts by the protesters to fraternise with and to win over police. “Brothers! Brothers! How much do they pay you!” protesters said to police ranks in Cairo.

The protesters are showing enormous courage in confronting the might of the state machinery. In some cases, demonstrators are forcing the police to retreat. It is reported that protesters took over a police station in Alexandria and that the “police have now given up fighting the protesters. The police and protesters are now talking, with protesters bringing water and vinegar (for teargas) to the police” (Peter Bouckaert, Human Rights Watch, in Alexandria).

Events are moving at a dizzying speed, as the masses enter the stage of politics. The next hours and days are crucial and could see Mubarak overthrown. It remains to be seen if the state apparatus of repression can withstand the tidal wave of mass protest. The potential role of the army, on the streets or behind the scenes, is currently unclear. At the time of writing, it is reported that riot police in Alexandria were overwhelmed by protesters, who have armed themselves with police riot shields, and that police commanders have lost contact with their subordinates. In Suez, protesters seized police arms and broke into police vans. Two police stations were seized and prisoners released.

Demonstrators instinctively made an appeal to the rank and file soldiers and police. Protesters in Cairo chanted slogans calling for the army to support them: “Where is the army? Come and see what the police is doing to us. We want the army. We want the army” An Al Jazerra reporter said protesters jumped and cheered beside an armoured army van, with the soldiers taking no action.

Socialists would add a class appeal to the rank and file army and police, who are mainly drawn from the working class and poor, including the call to create their own rank and file committees of action and to purge the officers and hierarchy, thereby fundamentally undermining and neutralising the security forces as a tool of repression for Mubarak. 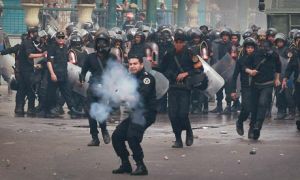 If the disintegration or partial disintegration of the police seen in Alexandria and Suez today was to spread and be replicated across Egypt, the Mubarak regime would collapse. However, severely wounded by today’s extraordinary events on the streets, the Mubarak regime is now fighting to save its life and can unleash even greater savage repression. Mubarak called on the army to take control of security, indicating he has no confidence the police are capable of holding the line. Indeed, the police in Cairo were unable to quell the street protests.

The regime is attempting to crush the mass movement, imposing a curfew tonight, shutting down most of the internet and sending security forces to Al Jazeera local offices. The army are being deployed on the streets, including army tanks. Some sections of the demonstrators may see the army as potential saviours but this will quickly turn into its opposite should soldiers be now be used to brutally prevent further opposition protests.

Events are unfolding fast, and as we publish it remains to be seen how the mass movement responds to these new developments. Will greater regime repression – the “whip of counter-revolution” – lead to even more protests and more steely determination by the masses to overthrow Mubarak or will the brute force of the state see the mass movement temporarily set back?

Even if Mubarak manages to hang on to power, for the moment, and brutally see off the street protests, today’s incredible events â€“ a rising of the masses â€“ means the regime is mortally wounded. Mubarak’s days in power are numbered, and it is no longer possible for the regime to continue to rule in the same old ways.

Today’s demonstrations mark the fourth consecutive day of protests in Egypt, which emulate the mass revolt in neighbouring Tunisia. So far, at least seven people have died in the unrest in Egypt and the police arrested thousands. A spokesperson for the opposition Muslim Brotherhood said that twenty members of his organisation were arrested on Thursday, including senior leaders.

The regime attempted to crack down on today’s planned demonstrations by blocking internet and mobile phone access. But before blocking the internet, activists were able to use social networking to call for protesters to go to mosques and churches today. The regime also warned that an ‘elite special counterterrorism force’ would be deployed at strategic points around Cairo.

This week’s desperate actions by the Mubarak regime shows it has long been losing its social base of support. Around 30% of Egypt’s 80 million-strong population is under 20 years old, with the average age of just 24 years. This week’s events amply illustrates that working people and youth have lost their fear of the regime. Veteran journalist, Robert Fisk, commented, “they are no longer afraidâ€¦Mubarak’s men seem to have lost all sense of initiativeâ€¦the filth and the slums, the open sewers and the corruption of every government official, the bulging prisons, the laughable elections, the whole vast, sclerotic edifice of power has at last brought Egyptians on to their streets” (Independent, London, 28/01/11).

The Muslim Brotherhood lagged behind the events of this week. Its leaders prevaricated over whether to support the movement or not. The Brotherhood then ran to catch up with the youth on the streets, attempting to take the initiative today and backing protests following Friday prayers. Protesters are heard chanting, “God is great!” leaving mosques after Friday prayers. Fisk comments that “This is not an Islamic uprising” warning, however, “though it could become one”. He adds, that for the moment “â€¦it is just one mass of Egyptians stifled by decades of failure and humiliation”.

Although recent years have seen impressive strikes and the creation of several independent unions, so far the Egyptian working class has not entered the struggle as an independent organised mass force, stamping its authority on events and giving a clear class lead to overthrow the Mubarak regime. A general strike call now would get overwhelming backing and bring society to a standstill. Elected committees of mass struggle, in the workplaces, communities, schools and colleges, linked on a local, regional and national scale, could spearhead the resistance to Mubarak and form the basis of the rule of workers and the poor.

Workers need their own mass party, with a socialist programme to transform society. But in the absence of strong workers’ and left organisations to lead the mass social eruption, the Brotherhood will try to fill the leadership vacuum.

Also trying to fill the vacuum is Mohamed ElBaradei, who today warned Mubarak that his regime “is on its last legs”. Stung by criticism that he returned to Egypt days after the protests began, ElBaradei stressed his “solidarity” with the protesters.

El-Baradei, leader of the National Alliance for Change, like the Muslim Brotherhood leadership, is belatedly trying to channel the mass movement under his ‘control’. 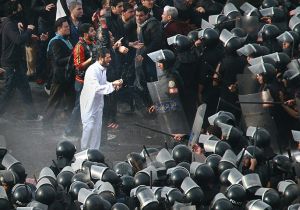 Indeed, US imperialism is extremely concerned at these developments. For decades, the US and other Western imperialist powers backed their ally Mubarak. Now concerned that about where the mass movement will lead, President Obama hypocritically calls on Mubarak to “make changes to the political system”. Mubarak has been a slavish follower of US policy in the region, including acting as prison guard over Palestinians in the Gaza Strip and as an ally against Iran. If Mubarak’s regime was to fall, US imperialist policy in the region could unravel and enter unchartered waters.

With Mubarak’s brutal repression, so far, failing to stop mass protests, imperialism and the Egyptian ruling class may be forced to remove Mubarak and make other changes at the top, to safeguard the future of the ruling elite in Egypt and a vital US ally in the region. They are terrified that Mubarak’s regime would collapse completely, possibly leaving the way open for the Muslim Brotherhood to fill the vacuum. The Tehran regime today provocatively commented that the mass movement in Egypt has “echoes” of the 1979 revolution in Iran that eventually led to the coming of power of the Mullahs.

The removal of Mubarak would be a great success for the mass movement on the streets. But Egyptian workers and youth can have no faith in any ‘national unity’ or ‘national salvation’ government, which would most likely involve remnants of the Mubarak regime and would be dominated by other pro-bourgeois ‘opposition’ forces. It is not even ruled out that attempts will be made to incorporate into a new regime the Muslim Brotherhood (or parts of it), whose leaders have long shown their willingness to compromise and accommodate. It claims its brand of political Islam is ‘moderate’. But as seen in the case of Tunisia, this sort of ‘regime change’ will not meet the needs and demands of the masses.

The Tunisian revolutionary movement is spreading across the Arabic world, from Yemen to Jordan and now most spectacularly to Egypt. Every rotten regime in the region is now threatened with mass street protests and their removal. The working masses have shown their power and blown away the notion that the masses will not fight back. The mass movements sweeping North Africa and the Middle East are a huge inspiration to working people and youth around the world and, quite rightly, a major concern for the ruling classes everywhere.