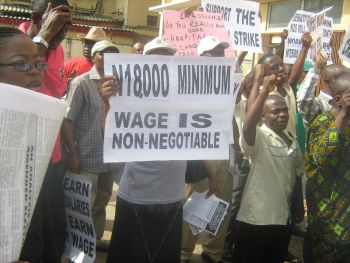 On Wednesday November 10, 2010, the Labour and Civil Society Coalition (LASCO) in Lagos complemented the 3-day warning strike declared by the Nigeria Labour Congress (NLC) and the Trade Union Congress (TUC) with a public rally to press home their demands for the implementation of the new national minimum wage and sensitise the public in order to mobilise mass support for the struggle.

The NLC and TUC had called a 3-day warning strike for November 10, 11 and 12 for the implementation of the N18, 000 new minimum wage agreed with the federal government, state governments and employers of labour in the private sector. However, the strike was to be called off on its first day.

The turn-out at the rally was low as a result of non-mobilisation of the rank and file workers by trade union leaders. It was only about 100 people mostly from the civil society and socialist groups that marched from Yaba amidst the chanting of anti-government and solidarity songs.

Up till Wednesday morning, the general public was kept in suspense as to whether or not the strike would continue. This is because of what appeared a faltering stance of the Labour leaders who had given in to a late night meeting with the President Goodluck Jonathan, with the hope that a positive response from the President would lead to calling-off the strike. However workers and general public expressed their support for the strike. But the Labour strike committee made little or no efforts to enforce the action. Banks, schools, shops, offices and other public places were shut down though market places, filling stations and informal sector workplaces were open. While the commercial bus drivers worked, the BRT buses were kept off the road. LASCO leaflets were massively distributed to sensitise the general public on the need to support the strike and participate in all protests, rallies and demonstrations whenever called by LASCO. 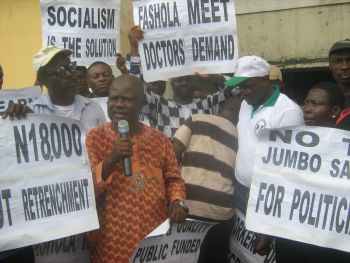 The rally took off at the NLC secretariat Yaba, Lagos at exactly 10.15am with speeches made by leading pro-labour activists and protesters carrying placards with messages like “N18, 000 Minimum Wage is not Negotiable”, “workers work, politicians steal”, “workers deserve decent wage”, “No to privatisation of PHCN”, “Workers work, Politicians steal” “For a Socialist Nigeria”, “Fashola, Meet Doctors’ Demand”, “No to Jumbo Salary for Politicians”, “Socialism is the solution” etc.

The speakers called on Labour leaders and workers to remain steadfast on the struggle in order to compel the government to implement the agreement. Experiences have shown that without strikes and mass action it is difficult for workers to gain concession from the successive anti-poor neo-liberal capitalist governments. It was also emphasized that labour must ensure that no single worker loses his or her job on account of a new minimum wage when it is eventually implemented.

The NLC and TUC had originally demanded a new minimum wage of N52,200 in December 2008 which the government ignored. But after protest rallies and marches had been flagged off by LASCO across the country, the Federal Government in August 2009 set up the tripartite wage negotiating committee of labour, government and private employers led by Justice Alfa Belgore. The tripartite committee agreed on a new minimum wage of N18, 000 and submitted its report to the government in May 2010 with a draft bill to hasten the passage of law on a national minimum wage. However, despite repeated demands including a 2-month ultimatum given by Labour in July 2010, the government has unfortunately till date refused to take concrete steps to implement the agreement. What the government did in response to the notice of strike was to call a Council of States meeting whose resolution points towards the renegotiation of the agreement and attempt to lower the minimum wage.

The rally was also used to condemn some state governments with penchant for refusing to implement agreement reached with industrial union nationally. Some of the speakers called on the governments of Lagos and South-East states of Nigeria to implement agreement reached with striking education workers and medical doctors. The Lagos State Government in particular has refused to implement national agreements concerning better remuneration, improved working condition and adequate funding of the health and education sectors. Doctors in Lagos state had been on strike for three months now while education workers in the four state-owned tertiary institutions had down-tools for seven weeks now. 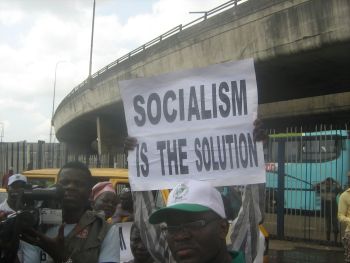 While the rally was on-going, news filtered in on the attack on the Chairman of Nigeria Union of Air Transport Employee (NUATE) Edo state chapter who was shot by a trigger-happy policeman while he was trying to prevent an aircraft belonging to Arik Air from operating in Benin. The procession then moved to the Murtala Mohammed International Airport, Ikeja, Lagos to picket the local wing of the airport in protest against this inhuman assault. However, after 30 minutes parley with the policemen stationed at the airport entrance gate, the procession moved to NUATE secretariat located along Airport Road, Ikeja where the rally eventually ended.

It was only in Lagos that any form of mass action was held; elsewhere it was a sit-at-home strike. In Oyo, Osun and Edo states where DSM comrades challenged the local labour leaders they were told lack of activities in their states to the absence of directive from the national leadership of Labour. Indeed, in Lagos the action was held in spite of Labour leaders who did not appear enthusiastic about the imperative of matching the strike with rallies and protest marches. No rally would have taken place but for the pressure and initiative of leading pro-labour activists organised in Joint Action Forum (JAF) â€“ the civil society arm of LASCO.

Now that the strike has been suspended until the end of November when the government is expected to have begun the process of implementing an increase, the Labour leaders must begin in earnest to show more seriousness with the mobilisation of the public support for the struggle. It would require consistent mobilisation of mass support of the public to compel this anti-poor government to grant concessions to any section of the working people. The national strike committee already formed by the NLC must not only not be dissolved yet, but also its mandate must be elevated beyond ensuring workers do not report to work on strike days. It should be a made into a fighting platform which works with socialist and pro-Labour activists to form action committees in workplaces and communities and initiate series of activities aimed at mobilising mass support for another possible strike as every indication points to the resolve of the government to lower the new minimum wage below N18, 000.

More importantly, the major lesson that has been lost to most Labour leaders from the series of strikes and mass protests that have been held since advent of the civil rule in 1999 is the necessity for the formation of a fighting mass working people political alternative that could wrest political power from the thieving ruling elite and use the resources of the country to guarantee decent wage, education, health care, infrastructure, etc for the benefit of all. This has been a major campaign of DSM, and we have not relented in calling on the Labour leaders to take up the gauntlet. We therefore call on workers, youths and change seeking elements to join us to reinforce this campaign and for socialist transformation of Nigeria.