ELECTRICITY WORKERS STEP UP FIGHT AGAINST PRIVATISATION OF POWER SECTOR 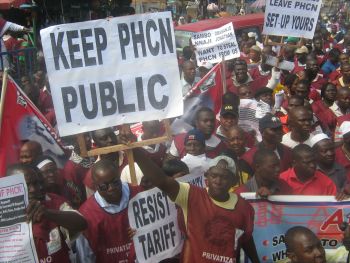 NLC AND TUC MUST ORGANISE SOLIDARITY ACTIONS TO BACK THEM

The struggle against privatisation and other neo-liberal policies in Nigeria was stepped up on Monday 25th October, 2010 when electricity workers, labour and human right activists under the auspices of Joint Action Forum (JAF) and the National Union of Electricity Employees (NUEE) took to the streets of Lagos to protest against the planned privatisation of the Power Holding Company of Nigeria (PHCN).

About 1,500 people clad in bibs bearing different slogans commenced the protest from the Nigeria Labour Congress office, Yaba, Lagos at exactly 9:55am amidst the chanting of anti-government songs. The protesters carried placards bearing messages like “PHCN not for sale”, “Resist the handing over of PHCN to private sharks”, “Reject privatisation of all public enterprises” etc.

Members of the Democratic Socialist Movement (DSM) participated in the protest carrying a banner and placards bearing such inscriptions as “No Privatization, Put PHCN under workers democratic control and management”, “A Socialist Nigeria”, “Join and build the Labour Party as a Fighting Working Class Party” etc. A special edition of the Socialist Democracy (SD) on the PHCN Sale, the education workers’ and doctors’ strikes was also produced and sold at the protest. There was also mass circulation of JAF leaflet which sensitized people about the evil of privatisation of PHCN.

The protest being the first public programme called by the Joint Action Forum, the pro-labour civil society partner in the Labour and Civil Society Coalition (LASCO), to frontally challenge the government’s neo-liberal and anti-poor policies of privatisation and commercialisation was seen by many as the beginning of a long battle. In their separate remarks, the General Secretary of the National Union of Electricity Employees (NUEE), Joe Ajaero and its President, Mansur Musa, called on Nigerians to resist the privatisation of the energy sector and also gave assurance that this is just the beginning. Joe Ajaero said “this is just the beginning of the struggle against privatisation, after this protest, we shall not hesitate to embark on civil disobedience including strikes until the federal government meets our demands”.

Speaking further, Joe exposed government’s plan, “their plan is to hand over the existing 3,000 megawatts being generated by PHCN to these looters’ companies to distribute at high cost to consumers, and the tariffs will move from N4 per kilowatt-hour (pkwh) to N18 and N22pkwh”. Truly, government has said that an increase in tariffs by over 500% is necessary in order to attract private investor into the power sector. 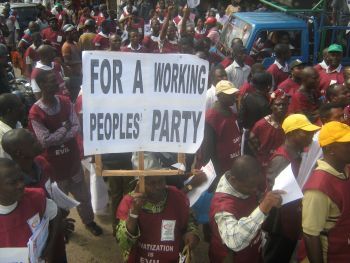 There were stoppages at various strategic places along the way to address the public on the evils of privatisation. At one of the joints, Abiodun Aremu, the Secretary of JAF, explained that of all the 20 private power companies granted licences since 2005, none is yet to add a single megawatt of electricity to the national grid.

The Chairman of the JAF, Dr. Dipo Fashina, debunked the claim by government that power supply will only be stable and adequate if PHCN is privatised: “The already privatised companies like NITEL, Nigerian Airways, Daily Times, Nigerian Ports Authority, Ajaokuta Steel and Delta Steel etc. have not been working; they are now in worse situation than they were when publicly managed. The essence of government is to provide public good to the people, any government that cannot provide electricity and social services like education, healthcare, etc. does not deserve to remain in office”. He also called on Nigerians to join JAF and LASCO-led protests to be held nationwide to resist the handover of public assets to private looters.

The leaflets issued by JAF highlighted the purpose of the protest rally as to support the struggle of electricity workers against the privatisation of PHCN by the federal government; support their demands for a living wage, including the payment of all monetisation arrears since 2003; and support their agitation for the regularisation of appointment of over 10,000 casual/contract staffs.

The mood of the public was mixed as to the real solutions to electricity crisis. Indeed, a section of the public openly called for the privatisation of PHCN owing to the fact that they have never enjoyed stable and adequate electricity supply. Some of them have also bought into disinformation being peddled by government which employs the debatable “success story” of the telecommunication sector as the justification for the privatisation of public enterprises.

However, some protesters were quick to explain that the entrance of private companies like MTN, Zain and Glo into the telecom industry was as a result of the liberalisation of the industry after NITEL (the publicly owned company) had been looted for years and cheaply sold off, and that NITEL has now been left in a much worse condition. Yes, there is improvement in telecommunication with the advent of GSM providers compared with the era of monopoly of NITEL when telephone was only meant for the elite. The fact is that the service is poor and tariffs are outrageous. This explains why most people who have phone lines (who despite being considerable are indeed a minority in the country) hardly have any credit to call with, thus making the telecom companies to resort to lottery and gambling in order to lure subscribers to buy credit. Their poor service accounts for why the vast majority of people using telephone subscribe to more than one network. If the NITEL had been kept public and run democratically with elected committees of workers, consumers and relevant professionals it could have provided much better land and mobile service at a cheap rate. Besides, the electricity is not the same as telecommunication in that while most people with telephone lines can afford to be without credits as a result of high tariffs and still be able to receive calls and indeed communicate by “flashing”, such opportunity does not arise with the electricity. Without paying for electricity you are cut off.

One obvious limitation in the speeches made by NUEE and JAF leaders at the protest was the absence of a clearly articulated alternative to the privatisation of the PHCN. Even though the JAF press statement and leaflet called for public ownership of the PHCN under workers and consumers’ control and management, it is doubtful whether the leaders think much of it. Meanwhile, the capitalists were quick to understand the implication of this kind of clear working class alternative to their system. On the day of the protest Monday, October 25, 2010, the Guardian devoted its front page to a statement by the Bureau of Public Enterprises (BPE) where it tried to refute the claim by JAF that no country in the world has successfully privatised its power sector citing the case of UK, Chile, Argentina, Georgia, Cameroon, USA, etc. as examples. It went further to question the efficiency of the labour unions and also likened JAF’s proposal on the public ownership and management of PHCN to the now “discredited and discarded communism”. 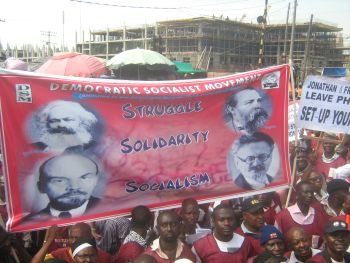 This is an attempt to hoodwink the public by mixing up the crimes and failure of Stalinism and the genuine ideas of socialism and communism. The call for public ownership and democratic control and management of the PHCN has nothing to do with Stalinism in the former Soviet Union and deformed workers states of Eastern Europe. As the DSM argued in the special edition of the Socialist Democracy (SD) sold at the protest, the reason why the PHCN should be placed under the democratic control and management of elected committee of workers and consumers is “to ensure that the public resources spent to improve the power sector is not mismanaged or looted as happened to previous government attempt to revamp the power sector and also to avoid the debacle of the former Soviet Union and deformed workers states of Eastern Europe where bureaucratic strangulation undermined the nationalised economies. What this means is instead of a few bureaucrats appointed by the government dictating the workings of public enterprises, decisions must be taken among rank and file workers and consumers elected into management committees at local government, state and national levels with the mandate to oversee the affairs of the sector in compliance with the needs of the people. However, a capitalist government cannot willingly hand over the running of the economy to workers and the mass of the people. Only a democratic socialist government of workers and poor people can place the running of the commanding heights of the economy in the hands of the people.”

Whatever is the aim of this propaganda by the government, one thing it has achieved is to help raise the debate on the ideas of socialism onto national public discourse. Socialists will utilize this debate to explain the ideas of a genuine, democratic socialism by distinguishing it from the discredited ideas of Stalinism of the former Soviet Union and deformed workers states of Eastern Europe.

The protest which was brought to an end at about 2:15pm at the Zonal Headquarters of PHCN, Marina, Lagos ended in a more spirited manner than it started. However, three protesters namely Raphael Omogboru, Dele Oshinloye and Adelakun Ayobami were arrested and arraigned before a court after spending more that 24 hours in detention at Denton Police Station, Oyingbo, Lagos. They have been however granted bail but at the time of writing this report they were still in prison custody as their bail conditions have not been met because they are stringent.

Twelve members of the Democratic Socialist Movement (DSM) participated in the protest and about 400 copies of the special edition of Socialist Democracy were sold.