ANOTHER ROUND OF UNIVERSITY WORKERS’ STRIKE

ANOTHER ROUND OF UNIVERSITY WORKERS’ STRIKE


ANOTHER ROUND OF UNIVERSITY WORKERS’ STRIKE 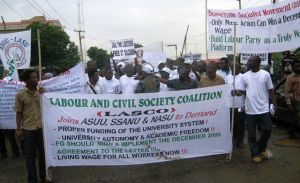 Only Joint Struggle of Workers, Students and Parents Can Guarantee Victory

The Democratic Socialist Movement (DSM) hereby solidarises with striking education workers who are demanding that the State governments implement an agreement signed with the unions by the Federal government in 2009. We believe the demands of the striking workers are genuine and worthy of support of parents, students and working class youths.

In Lagos, even workers’ unions at State-owned institutions like the Lagos State Polytechnic (LASPOTECH), Michael Otedola College of Education (MOCPED) and Adeniran Ogunsanya College of Education (AOCOED) have joined the strike action. All universities in the seven states (Anambra, Cross River, Ebonyi, Enugu, Imo, and Rivers States) of the South east and South-south Nigeria have been on strike for more than two months now.

Their grouse is the refusal of the State governments to implement agreement signed between the Federal government and the Staff Unions last year after a 4-month nationwide strike action that paralysed activities in universities. The Federal government had signed agreement covering improved conditions of service, education funding, university autonomy and academic freedom. This agreement also prescribed a gradual increase in education funding and the establishment, by all university governing councils, of a budget monitoring committee involving elected representatives of students and staff unions to monitor how the university authorities spend government allocations.

Firstly, representatives of Pro-Chancellors of state universities and the Council of States of which state governors are members gave their consent to the agreement before it was finally signed in October 2009. This means that the agreement is binding on all operators of universities in Nigeria. Also, Nigeria operates one university system with one set of academic standards. Therefore the argument of federalism is merely a ruse being used by the defaulting State governments to avoid meeting obligations on workers welfare and education funding.

Secondly, the Revenue Mobilisation, Allocation and Fiscal Commission (RMAFC) is the agency in charge of the salaries and allowances of all public office holders at federal and state levels. This means that the Governors and legislators of each State irrespective of their resources receive the same amount of salary as other states. Despite the fact that this arrangement is unitary, no protest has ever been heard from the Lagos State government or any of the other defaulting states since they benefit from this arrangement. But when it comes to the wages they pay, rather than the salaries they receive, the State rulers always seize upon any argument they can in order to short-change workers.

NO REASON TO DEFAULT

Nothing better exposes the anti-poor characteristics of both the national ruling party of the People’s Democratic Party (PDP) and opposition party of the Action Congress of Nigeria (ACN) than the current strike action and the state of education in general. All the bourgeois parties today are responsible for the pitiable decay in the education sector.

According to the United Nations Development Programme (UNDPP), in its Human Development Index reports of 2005, “Due to poor funding of education, education at all levels suffers from low academic standards; lacks requisite teachers; both in sufficient quantity and quality. Even the few qualified teachers available are no sufficiently motivated in terms of remuneration or conducive operating environment to maximise their output into the education system. Schools are over-populated and classrooms are over-crowded, facilities are inadequate and over-stressed, library shelves are empty and covered with cobwebs, while laboratories lack up-to-date equipment”.

Equally, statistics clearly paint a gory picture of how Nigeria has fared in the area of education provision in the last 50 years. For instance, no Nigerian university can be found among the first 500 in the world and the first 50 in Africa and there are over 12 million children of school age who are out of school. Just this year, Nigerians were shocked by the mass failure in both 2009 National Examination Council (NECO) November/December SSCE examination and 2010 May/June WAEC examination. In the first case out of 324, 682 candidates, only 4, 223 representing 1.8% passed with at least five credits. This is a damning 98% failure! In the second case, only 337, 071 candidates representing 24.94% out of a total of 1, 351, 557 candidates passed with five credits. In other words, about 74% failed!

HOW TO FIGHT AND WIN

The Democratic Socialist Movement (DSM) supports all workers’ struggles for increases in wages and improved working conditions as this will enhance the confidence of workers to fight for greater demands. However, only an adequately funded public education sector that is placed under public democratic control and management can guarantee improved working conditions and wage for education workers.

Therefore in order to win this struggle, the striking workers must ensure that the struggle is aimed at challenging governments’ neo-liberal policies of education under funding and commercialisation. The 2009 agreement itself covers education funding and democratic running of schools. This section of the agreement must not be jettisoned in the struggle. Most importantly, workers must link the demand for adequate funding of education with the need to fight for an appropriate government that will be prepared to commit society’s resources to provide free and functional education. So far the capitalist system with its unjust policies of privatization and commercialization remains, adequate funding of education will only be a mirage as education will be run for profit rather than for the benefits of all. Only a workers’ and poor people’s government with socialist programme and policy of public ownership of the commanding heights of the economy under democratic control and management of the public can reposition the education sector through the massive investment of society’s resources into providing free education at all levels and for all.

While the extent to which the struggle can go cannot be determined apriori, nevertheless the striking unions must consistently demand the implementation of all aspects of the agreement including the section on university funding, genuine autonomy and internal democracy. Naturally, the government will make the excuse that it cannot afford wage increase and increase in funding at the same time. In this case the striking unions must insist on a time frame within which all aspects of the agreement will be implemented. The argument must be that the essence of the struggle of the Unions is to reposition the education sector by ensuring the wellbeing of workers through salary increase as well as the provision of teaching and learning facilities through adequate funding.

NO TO SIT-AT â€“HOME: FOR RALLIES AND MASS PROTESTS NOW!

The entire experience of the education workers’ strike last year as well as the historical experiences of workers’ strikes in the labour movement in Nigeria and internationally has shown that a strike can only win when it is organised as a popular action involving congresses, leafleteering, rallies, protests and demonstrations. Therefore, the striking unions must not pursue this strike as a sit-at-home action. Efforts must be made to organise side by side with the strike a comprehensive program of action including congresses, rallies, protests and demonstrations. This is the best way to reach out to the mass of parents and students with materials like leaflets and posters explaining the reason for the struggle.

Most importantly, the strike is essentially a struggle to rescue education from the clutches of the neo-liberal policies of the government. Therefore, parents, students and working class youths have a responsibility to give active support and solidarity to the struggle of the unions. The students’ unions, the National Association of Nigerian Students and radical students’ organisations like the Education Rights Campaign (ERC) must organise solidarity mass actions like rallies, protests and demonstrations to back this strike. This kind of solidarity action will help to build a rock-solid front against the attempts of the government to use the media and other weapons to whittle down the strike and isolate the striking workers.

The Nigerian Labour Congress (NLC), the Trade Union Congress (TUC) and individual trade unions have a responsibility to call solidarity strikes and other actions to back the strikes of the education workers. This is important because the collapse of public education is part of the neo-liberal attacks of the capitalist government against the living standards of the working class. If bid business will not take over the running of the education sector outright, all hands must be on deck to wage a consistent struggle.

FOR A SOCIALIST PLAN OF EDUCATION AND SOCIETY

On the basis of capitalism, public education and the welfare of education workers and students will always come under attacks. This is because the Jonathan capitalist government, like its predecessors, subscribe to the philosophy of the market as the only way to run society. However, the condition of education, health and the living standards average Nigerians for the last 50 years has shown that this neo-liberal outlook has failed and will always fail. Capitalism is fundamentally an unjust system which enriches a few while impoverishing the rest. What neo-liberalism has achieved in Nigeria in the last 50 year is to create frightening wealth inequality and collapse of public education while enriching an infinitesimal minority.

Only a socialist plan of production and society can guarantee the adequate funding of education and the provision of a free and functional education at all levels and for all Nigerians. Therefore, the striking unions must link the struggle to reposition the education sector with the ultimate necessity to transform Nigeria from an unjust capitalist society to a democratic socialist society. This will involve building a genuine, mass-based fighting workers party committed to leading the working class to achieve its historical task of taking over political power from the capitalist ruling class. Under a socialist society, the commanding heights of the economy will be nationalised and placed under the democratic control and management of the working masses. Under this arrangement, it will be possible for society to mobilise adequate resources and massively invest in provision of free and functional education at all levels and for all members of the society.

(1) Immediate implementation of the agreement in order to bring to an end the on-going strike actions in State-owned tertiary institutions.

(2) Massive government investment in education up to 26% of annual budget.

(3) Cancellation of all fees.

(4) Provision of free, functional and compulsory education at all levels.

(5) Payment of N40, 000 Cost of Studying Allowance (COSA) to all Nigerian students in tertiary institutions to offset the cost of textbooks, accommodation, feeding, upkeep, transport etc.

(6) Recall of all victimized student and staff activists and restoration of all banned unions.

(7) Democratic running of schools through the involvement of elected representatives of staff and students’ unions in all decision-making organs.

(8) A genuine, mass-based and fighting workers party with socialist ideas and programmes.

(9) Public ownership of the commanding heights of the economy under the democratic control and management of workers.

(10) A socialist Nigeria as part of the socialist confederation of Africa and the world.