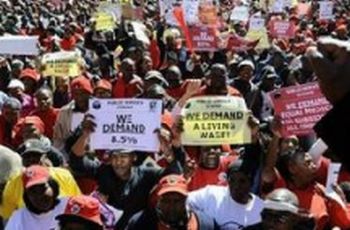 Approximately 20,000 workers marched in Tshwane and 15,000 in Cape Town on Tuesday, 10 August, as 1.3 million public sector workers, organised in the Congress of South African Trade Unions (Cosatu) and the smaller Independent Labour Caucus (ILC) and Federation Unions of SA (Fedusa), shut down public services like schools and hospitals almost completely. In other towns pickets were held.

The unions’ main demands are for an 8.6% salary increase and a R1000 housing allowance. This is already a major drop from the original demands of 15% and R2500 respectively. The government, however, has lifted its initial offer of 5.2%/R100 to merely 7%/R130.

The workers’ anger and frustration was palpable when the DSM participated in the massive national marches on Tuesday. Several workers who bought our paper commented that they will never vote for the ANC (the ruling African National Congress) again.

“The government doesn’t care about us as workers, we can see that,” one woman commented. “Then there is no point in voting for them”.

We got good responses from many workers to our leaflet. Some expressed cautious hopes that the one-day warning strike would push the government to concede.

While the government and the media have churned out propaganda about lower inflation and the alleged privileged position of public servants, as well as threats that retrenchments and cutbacks are to be expected if 8.6% is granted, workers are acutely aware that they cannot afford to capitulate. Inflation, the speed of price increases, may have gone down, but this has little impact for working-class families. One million workers lost their jobs during 2009 and the retrenchments are continuing. The real unemployment rate is around 40% and the average worker supports eight people on one wage. Massive electricity price increases are due later this year, continuing the series of steep hikes over the past couple of years that have left many forcibly cut off. Food prices in particular are set to increase sharply as a result. There have also been high expectations for the new administration under President Zuma to live up to the image painted by the trade union and South African Communist Party (SACP) leaderships of a government championing the interests of workers and the poor.

In contrast to the workers’ boiling anger and eagerness to strike, the leaders of Cosatu have been trying desperately to avoid a confrontation with government. The very calling of yesterday’s one-day strike, despite pressure for an indefinite strike from the membership, the limiting of the marches to the two capital cities, brief and disorganised marches, and great confusion surrounding the strike all reflect the leadership’s reluctance.

The Cosatu leaders find themselves between the rock of the volcanic anger and disillusionment they will face if they let the members down, including the possibility of losing control of entire regions which may defy them, and the hard place of falling out of favour with Zuma and the ANC, which is again a battleground for different factions of the ruling class. The ANC government is based on the Tripartite Alliance formed by the ANC, the SACP and Cosatu. Given the mood in the workplaces, retreating is not an option. Appearing to be stunned by the hard stance the government has taken, the union leaders are desperately trying to balance on hope and thin air. Yesterday’s deadline until Thursday morning has been pushed to Thursday evening by the government. The outcome is still hard to predict since it is clear that the real negotiations are taking place not in the bargaining council but somewhere amid the ANC/Tripartite Alliance factional battles.

What the strike has already posed very sharply to workers, however, is the crumbling of the illusions in the Zuma government and the necessity for the workers to break away from it, out of the Alliance prison. The enormity of this challenge was reflected in a very mixed mood at the Tshwane march on Tuesday; some workers more or less threw themselves at our material; bursting with anger at the limits imposed by their leaders’ alliance with the bosses, while others appeared to be intimidated and nervous trying to keep this reality at bay.