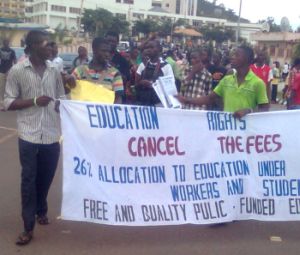 The Education Rights Campaign (ERC) kick-started a campaign against fee hike and the poor funding of the education sector on the 16th of June, 2010 with a protest march around schools in Ekiti states and circulation of leaflets in other states like Osun, Lagos, Edo and Niger State.

For the past three years, June 16, which is anniversary of Soweto Massacre, has been marked by ERC as the Day of Action against neo-liberal attacks on education in Nigeria with protest marches and mass circulation of leaflets.

ERC was formed by the Democratic Socialist Movement (DSM) â€“ CWI Nigeria â€“ in 2004 as a platform to mobilize youths and students for struggles against government’s anti-poor education policies in the absence of a fighting National Association of Nigerian Students (NANS). Last year, the ERC was prominent in the media in Nigeria during the strike action of ASUU, SSANU, NASU and NAAT as it organized many protests and demonstrations in solidarity with the demands of the striking education workers.

In the run-up to this action the ERC, at its National Coordinating Council (NCC) meeting of Thursday 27th May 2010, had considered the steep hike in fees across campuses and the cut in education funding in the 2010 budget and therefore called for lecture and mass protest on campuses starting from June 16, 2010.

This combined with the substantial slash in education funding in the 2010 budget has created a condition of hysteria in the education sector not just at the tertiary but also primary and secondary school levels. In the 2010 budget, about N295.3 billion (6.4%) was allocated to education sector. As recent as last year, about 7.2% was allocated to education. One major and topical issue in Nigeria today is the poor performance of students in examinations. For instance, only less than 2% of students who sat for the 2010 NECO were able to get credits in five subjects including English and Mathematics.

While the responsibility of organizing a one-day nationwide warning lecture boycott and mass protest was placed on the leadership of the National Association of Nigerian Students (NANS), it was clear that serious mobilization and organization of June 16 rested on the ERC. This NANS leadership is not expected to lead any serious struggle against the anti-poor education policies of the government.

Thus right from the May 27, 2010 NCC meeting, the ERC embarked on sensitization tour of campuses nationwide. With about 2,000 copies of posters, members of the ERC, most of whom were DSM members, toured over 37 tertiary institutions in the North, East, Southwest and South South part of Nigeria pasting posters and discussing with leadership of Students’ Unions on the need for NANS to call a one-day nationwide warning lecture boycott and mass protest. 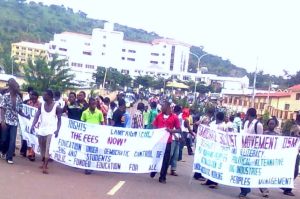 THE MASS PROTEST AGAINST FEE HIKE IN EKITI

An attempt by students to embark on protest in March was scuttled by the Jude Imagwe-led faction of the National Association of Nigerian Students (NANS) as well as the Sola Fayemi-led leadership of the Students’ Union of the University of Ado-Ekiti (UNAD). There was an allegation that the State government spent a sum of N500,000 to buy off the NANS leadership and their coteries in the leadership of the UNAD Students’ Union. This led to bitterness among students as freshers started to pay the increased fees. All this gave impetus to ERC’s campaign for a one-day lecture boycott and mass protest in Ekiti State.

To this effect, a meeting of ERC with three student groups (NANS JCC, DSM UNAD Branch and MENS) was held at the Town Hall of Ikere and a mobilization committee consisting of members of the UNAD branch of the DSM and other activists was set up to mobilize for the June 16 lecture boycott and mass protest. Also the ERC, NANS JCC and MENS were adopted as the official leadership of the struggle against fee increment in Ekiti State.

JUNE 16 MASS ACTION IN EKITI: One of The Biggest Protest in Recent Time

According to The Nation newspaper of Tuesday, June 17 2010, “the protest was one of the biggest in recent time”. Although newspaper reports have quoted between 1,500 and 2,000, over 2,500 students mostly from the University of Ado-Ekiti (UNAD) and some from College of Education Ikere marched from the University of Ado Ekiti (UNAD) to the Governors Office demanding reversal of fee hike and adequate funding of education. It was one of the biggest protests led by the ERC so far. Other students most of whom were ERC and DSM members also joined from the College of Education Ilesa and Obafemi Awolowo University (OAU) Ile-Ife. The protest was led by H.T Soweto (National Coordinator of the Education Rights Campaign), Luther Oyebode (The Chairman of NANS JCC Ondo-Ekiti Axis and Tope Idowu (The National Coordinator of the Movement for the Emancipation of Nigerian Students).

The success of the protest march could not be unconnected to the fact that adequate preparations and mobilization were done prior to the day of action. Hundreds of copies of the ERC awareness poster were pasted on their campus twice before June 16 2010. Announcements and jingles were also placed on some radio stations in Ekiti State before the day of action. Mass media campaign was done including an interview in Yoruba Language on Lagos State Television (LTV) granted by H.T Soweto, who is also DSM member, on the eve of the protest.

As early as 6.30am on June 16, mobilization began at UNAD. The Protesters filed on the streets with a crowd of about 70 students and by 7.30 am and we began to enforce the lecture boycott on the campus. Immediately some lecturers complied as a result of the notice submitted to the staff unions earlier and a lot of ecstatic students began to join the protest. At the end of the lecture boycott by 9am, over 2500 students had joined the protest.

After gathering a huge mass of students, the leadership decided to move the crowd to the government office to submit the charter of demands. The students secured the service of almost 15 commercial buses to convey them. The police in their usual manner came with the intention of aborting the movement but found the large mass irresistible and unstoppable and later agreed on escorting the students to the government house. Though, the governor Mr. Segun Oni was not in the office, he was however represented by the Special adviser to the governor on education, Yakubu Sanni who said the state government would look into the demands signed by the NANS JCC, ERC, MENS and NAIS and publicly submitted to the state government. The demands are:

(1) Reversal of all fee increment ad cancellation of all fees.

(3) We demand the full implementation of the original bill that established TUNEDIK as part and parcel of the College of Education on one site and with one governing class.

(6) Reinstatement of Olalekan Soyombo (LINCOLN) whose studentship was recently removed by the UNAD management.

(7) Full democracy in our schools administration

(8) Nationalization of the commanding heights of the economy under workers’ democratic control and management.

The students later agreed on giving the state government 14-day ultimatum to call for negotiation or meet all the demands. The ultimatum will lapse on June 30, 2010. The mass of students later went back to UNAD to hold a congress where plans for mobilization for another mass protest by June 30 were discussed. At the congress the following resolutions were made:

(2) A political symposium at the institution to keep the consciousness and the mood of students high,

(3) Immediate press conference at Akure some days before the lapse of the ultimatum .

Since the protest, the State government has embarked on false propaganda to discredit the protest. The Chief Press Secretary to the State government Mr. Wale Ojo claimed in the newspapers the next day that the protesters were not UNAD students but ‘students of Action Congress (AC) University’ in an attempt to allege that the protesters were sponsored by opposition parties in the state. Also, the Presidents of the Students Union of the UNAD and the College of Education Ikere have since June 16, 2010 addressed the press, on the sponsorship of the state government, denouncing the ERC for the protest. All this has necessitated the redoubling of efforts on the part of the DSM and the ERC to make the June 30 action a reality. The ERC shall continue to mobilize Nigerian youths and students against all forms of neo-liberal attacks on public education by governments at all the states and the federal level irrespective of political parties.