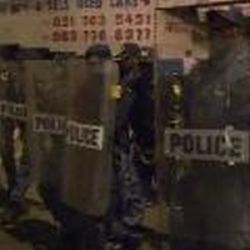 South African riot police fired tear gas on hundreds of security stewards protesting against wage cuts, 90 minutes after the match between Germany and Australia in Durban.

www.socialistworld.net website of the committee for a workers’ international, CWI

“They’re giving us 205 rand [around â‚¬20]; we started at 12 noon and worked until midnight”, Sikhumbuzo Mnisi, a 44-year-old from Durban claimed, according to the New York Times, “Different things have been said to people, but we were promised 1,500 rand (around 140 Euro) per day”. He reported: “We started to protest because we wanted to negotiate.”

According to other reports, around 400 stadium staff protested against a cut in wages from 250 Rand to 190 Rand (around â‚¬18) per day.

Hundreds of stewards came together to protest. In the words of Rich Mkhondo, head of communications for the local World Cup organising committee: “Police were called on to disperse the protesting stewards”, portraying the conflict as an “internal pay dispute between the principal security company employed by the organising committee and some of the static security stewards employed by the company at the match”.

At least one woman was injured by rubber bullets. Two workers were arrested. When the police tried to disperse the workers from a car park near the stadium, they used a stun grenade.

Already one year ago, on the Confederations Cup workers protested because they were given less than the promised wage.