Workers Have to Wait Longer for a Living Wage 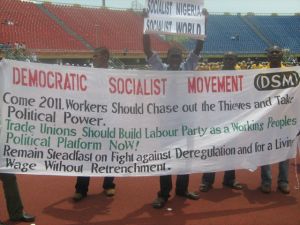 Labour Should Give Ultimatum and Begin Mass Mobilisation for a Warning Strike for N52, 200 Minimum Wage and against Deregulation

Were there a fighting trade union leadership this year’s May Day would have been an avenue to mobilize workers for action around demands for improved living conditions and against neo-liberal attacks. It should be recalled that about two weeks after the last year’s May Day, Labour flagged of a series of nationwide rallies and protest marches against deregulation and for a new minimum wage of N52, 200. None of the demands have been met, instead there have been some signs of subterfuge on the part of some labour leaders to ditch the struggle or water down the demands. This is despite the fact that the government, in spite of its sugary words, is vehemently hell bent to unleash the anti-poor, neo-liberal policy of deregulation on ordinary Nigerians. What has been achieved so far on the minimum wage at best is a lip service. From all indications if an increase is granted it will not only be tokenist but also a bargaining chip or trade-off for trade union leaders to tolerate neo-liberal attacks especially deregulation.

Obviously, some Labour leaders are preparing to compromise on the earlier demand for N52, 200 minimum wage, a figure which was arrived at on the basis of empirical estimates of cost of living in the country. While the NLC President, Abdulwahed Omar mentioned the demand for minimum wage and lamented the dragging of the issue by the government, he consciously avoided to state the figure demanded â€“ N52, 200. But, the TUC President Peter Esele hinted at a new minimum wage of N18, 000, which perhaps the Labour leaders had agreed with the government at tripartite committee level, but this received a rousing rejection from the workers at Abuja rally. 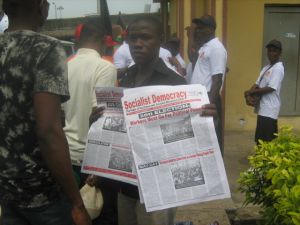 However, in some of the states where DSM comrades were present and active, workers left the May Day rallies without good news of a living minimum wage and yet there were no long faces. In recent years, to many workers and trade unions the May Day rally has become a social gathering meant to unwind and party. This year was not different. Only few came with placards demanding improved working and living conditions. Indeed, in Delta State, the rally was largely a novelty match between the public and private sector workers!

There were exceptions like in River State where workers repeatedly booed the Deputy Governor and the Labour leaders for treating them to cock and bull stories on the new minimum wage and phantom effort of the state government to improve the welfare of workers in the state. Some workers told our comrades that they had come to May Day with hope to hear that government had granted an increment in their salaries.

Also in Lagos, besides the Textile Labour Union which came with placards demanding industrialization and revival of textile industry, the workers from Lagbus which operates BRT, came with placards to denounce the inhuman working conditions at the company. Some of the placards read, “Lagbus workers are suffering and smiling”, “Lagbus should give us condition of service now” and “Help to stop 2nd degree slavery in Lagbus”. This company is a creation of the Lagos State government, but privately run under the public-private partnership. Last August, four workers of the company were arrested and detained for leading a protest for improved working conditions. These workers, who are still face trial at a Lagos court, have been sacked by the company. Scandalously, the leadership of their union, AUCPTRE, has not only abandoned them, but also supported their victimization because they embarked on independent action when the union officials had refused to help them. 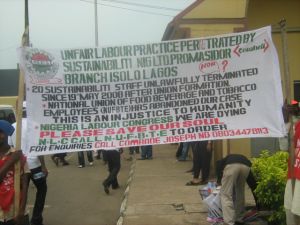 Unfortunately, pro-management and bureaucratic union leadership is commonplace. At the main entrance of the stadium where the rally was held in Lagos, were some workers from Promasidor, producer of Cowbell milk, carrying a banner and placards which lamented that their union, food and beverage union (NUFBTE) has abandoned 20 workers who were sacked for leading a struggle for unionization and denounced anti-labour practices in the company

Of course, in Abuja, where the NLC and TUC jointly held a central rally, there were some radical speeches from the Labour leaders which put the government to task on some of its failures. The NLC President, for instance, attacked market economy and neo-liberal policies of privatisation and deregulation as the reason for the global economic crisis and said that Nigeria government must embark on mass employment program wherein government will play central role and that private economy cannot be relied upon since it was the cause of the problem. He also reiterated their recent position that NLC will continue to oppose deregulation provided government have not created necessary infrastructure (functional railway, energy, good roads etc.) to make deregulation work.

But at most of the states, it was a celebration of servitude of most Labour leaders to their respective governments. It appears there was a competition for the best of superlatives to qualify the numerous “achievements” of governors which in reality only exist in a castle in Spain. The speeches of most state labour leaders were patronizing, groveling and self-serving. 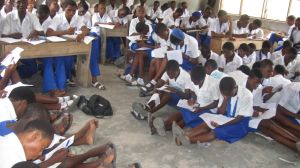 In Lagos for instance, most of the speech of the NLC chairman, Michael Alogba, was dedicated to praise-worship of Governor Babatunde Fashola and requests for state sponsorship of labour leaders to pilgrimage to Mecca and Jerusalem, financial support during Muslim and Christian festivals, vehicle donation, and appointment of special adviser on Labour. The demand for a minimum N52, 200 minimum wage and against deregulation was only tersely mentioned. While he correctly highlighted the appalling state of infrastructure, health care and education across the country, he was conscious enough to exempt Lagos state. In his words, “But in Lagos the situation has been ameliorated reasonably”. This is a lie. For instance, the May Day issue of Socialist Democracy, the DSM’s paper, has in its front-page the picture of some students in a Lagos state public school sitting on bare floor to write exams. It is heartrending. The picture is symptomatic of decay in most public schools in the state.

One of the highlights of this year May Day in Lagos was an unprecedented effort by the Labour Party to reach out to workers and ask them to join the Party. The state chapter of the Party at a general meeting had set up a committee comprising of socialists (including a DSM comrade) and trade union activists to organize the intervention. The Party had a stand where a good number of workers came to join. There were also banners and leaflets with messages that reaffirm solidarity of the Party with workers on the struggle for a living wage and against deregulation, and call on workers to join the Party.

Also in Osun state, the DSM comrades participated actively in the mass circulation of special leaflet produced by the state chapter of the party. The leaflet, which highlights instances of bad governance and attacks on socio-economic rights of workers and ordinary people in the state in the state, calls on workers to join the party in order to take political power for the interest of all. The leaflet was well received by the workers some of whom promise to join the party. 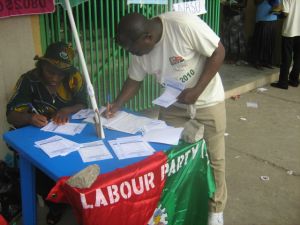 This intervention of Labour Party in Lagos and Osun reveals that many workers have been looking for a working people political alternative and see the Labour Party as their party. The only problem is that the Party had not hitherto offered them opportunity to join by bringing the Party close to them.

DSM comrades participated at 11 rallies across the country namely, Abuja, Lagos, Oyo, Ogun, Osun, Ondo, Ekiti, Edo, Delta, River and Akwa-Ibom. We intervened with banners and placards raising demands on minimum wage, deregulation and building of Labour Party as a working class people platform. Indeed, one of the placards calling on Labour leaders to build the Labour Party donned the front-page of the Guardian newspaper on Sunday May 2. Segun Sango, the General Secretary of DSM gave a solidarity message on behalf of LASCO at the Lagos Rally. We sold 1,182 copies of the May Day issue of our paper “Socialist Democracy” (SD), 153 of the April/May edition of SD, 78 Nigeria perspective “Nigeria on the Brink” and 101 copies of the pamphlet “Nigeria on the Cliff”.

No doubt, most workers would have expected to go home from the rallies with the message of a new minimum wage. What they got from the Acting President Goodluck Jonathan was another promise and a proposed legislation that engenders a new minimum wage structure that is self regulating. This may mean that workers have to wait much longer even for a figure that may be well below their expectation. This has shown that workers can hardly win a living wage on the basis of passive industrial relations talks or attempts by the Labour leaders to be nice to the government. It is only steadfast struggle that can guarantee a genuine victory for workers. Besides, the experience has shown that a new minimum wage usually attracts retrenchment of workers and pig-headed refusal of most state governments and private employers to implement it. It is therefore incumbent on the Labour leaders to ensure that a living wage is paid to all categories of workers across the country without a single job loss. This can only be achieved with a spirited struggle and committed leadership. We therefore call on the Labour leadership to give at least a 14-day ultimatum to the government to meet the demand for a N52, 200 minimum wage without retrenchment and immediately commence mass mobilization of workers for a 24 or 48 hours warning general strike and protest marches.

The approach of Labour on deregulation which calls on the government to put in place some infrastructures and new refineries before deregulation could be tactical to tie hand of the government but faulty and myopic. On the basis of anti-poor neo-liberal capitalist programme, the government cannot on a lasting basis meet the conditions of Labour. It is deregulation that has necessitated that public resources are not committed to infrastructural development and social programme like quality education and health care in the first instance.

Even when the government allocates money on social infrastructure it is usually borne out self-serving agenda to loot public resources as there will be nothing to show for it. For example about $16bn was spent on the power sector by Obasanjo government and yet the public electricity supply has only got worse. Deregulation and privatization constitute the central plank of any neo-liberal capitalist government. This explains why the government is hell-bent at implementing the anti-poor policy of deregulation of downstream sector of oil industry. It is only a matter of time the government will strike with the dagger. This government has to be replaced with a working peoples’ government running a socialist programme in order to defeat deregulation along with the other anti-poor neo-liberal programmes.

More importantly, the major lesson of all the general strike and mass protests of the last one decade is the need for Labour to lead workers and poor masses to take over political power from the thieving capitalist ruling elite and enthrone a working peoples’ government that will defeat anti-poor neo-liberal policies of deregulation and privatization. To achieve this, the first step is for trade unions and workers to become active in the Labour Party formed by them and help rebuild it as a fighting working class political alternative.