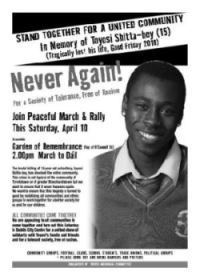 Communities must unite against racism

Below we publish an article written by Joe Higgins MEP, who along with other Socialist Party (CWI in Ireland) members, has been heavily involved in the organisation of a united community protest in response to the tragic murder of Toyosi Shitta-bey in Dublin on Friday 2 April, in an incident widely seen as having had racial undertones. Article originally published on www.joehiggins.eu

Easter Monday night’s vigil in Tyrrelstown, west Dublin, for the slain 15 year old Nigerian boy, Toyosi Shitta-bey, was as uplifting as it was desperately sad.

The attendance of about 1,500 braved the unseasonal, biting cold to pay their tributes and make a powerful statement about the kind of society in which they want to live.

The huge attendance of youth impressed most. Joining their African born peers, a large cohort of Irish teenagers showed their solidarity with Toyosi’s family and their own deep distress at his brutal killing. For them there are no barriers of ethnicity or colour. “Toya” was their friend, their schoolmate or their football club colleague â€“ “a legend” as a group of his Irish teenage friends told me through their tears, “the greatest guy, everyone loved him.”

“The best team mate you could hope for,” said the captain of Toya’s Shelbourne football team, members of which were prominent at the vigil and their grief was palpable.

Two people are charged in connection with the killing of Toyosi and it is important that justice is served with fair procedures for all. It must be said that, pending the full picture emerging, there is a widespread perception that there were racial undertones to the incident which resulted in his death. That perception itself is an important factor that needs to be addressed.

Certainly the youth of greater Blanchardstown have already given powerful testimony to the kind of society they wish for â€“ one where their common humanity and solidarity is what is vital, not colour, nationality or ethnicity. That is also the outlook that predominates in the community of Tyrrelstown where Toya lived and where his young life was ended so tragically. In that sense this outrage was quite exceptional.

This is not to say that there are not serious problems of racism in our society. Members of ethnic minorities frequently have negative experiences especially of verbal racial abuse. Teachers have a particular vantage point in observing how young people of different ethnic backgrounds interrelate. The Teachers Union of Ireland has suggested that there may be particular problems in Dublin and specifically in communities hit heavily by job losses.

This raises the wider issue of how racism can be exacerbated by the economic and social crisis within the present system. It also suggests that an important contributor to ethnic solidarity is having a society where jobs, homes and school places are available to all and where a social infrastructure exists which allows maximum interaction in communities.

Tyrrelstown was built over the last ten years with around 2,500 houses and apartments. Many individuals and groups are working hard in the community organising activities for young people such as soccer and Gaelic football clubs. Many parents are very active in support of the two primary schools.

However, it must be said that the community has been badly let down by government and planning authorities. The developers made massive profits at the height of their property bubble but, while there is a luxury hotel across the road, there is not even a community centre where youth facilities could be provided and where the community could meet. Neither are there permanent school buildings. This is despite much work and lobbying by local community activists and some political representatives.

This tragedy throws a light on a number of social factors which determine how youth of different ethnic backgrounds interrelate and going to school together is one of the most important. Attending Hartstown Community School, where Toyosi was a student, is obviously a great bonding experience for many. And, by the way, the manner in which teachers threw open the school for grieving students in the middle of the Easter holidays and during a bank holiday weekend was a demonstration of their dedication and the importance of public facilities. Many teachers there are distraught over the fate of their valued student. Those elements of the media who have been engaged in a consistent vilification of public sector workers such as teachers should be obliged to take heed.

The trauma of a horrific event such as the killing of Toyosi Shitta-bey can often inspire the most socially concerned people in communities to act. Community activists and organisations in Tyrrelstown will no doubt redouble their efforts to unite the community and to work actively to create the conditions where young and old of all ethnicities, religions and colours can live in peace as is their fundamental human right. They will demand urgent action of government and local authorities.

They will also be working hard to ensure that a Protest March on this Saturday, April 10th, assembling at the Garden of Remembrance in Dublin at 2.00pm will be strongly supported. And the wider community in Dublin and indeed throughout the country can also show their solidarity by attending.