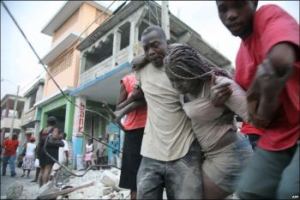 The humanitarian catastrophe that has befallen Haiti beggars belief. The powerful earthquake that struck on 12 January left many thousands dead, with estimates running to 200,000 and more. The flimsy slum dwellings in Port-au-Prince, the capital, collapsed, as did public buildings, including schools and hospitals. Many thousands are still missing and more are badly injured.

Power supplies and communications were destroyed and only one airport runway operates. It is estimated that some three million people, most of whom have been made homeless, are in dire need of water, food, clothes, shelter and essential medicines.

The desperately poor country has few resources to deal with the catastrophe. People are reduced to trying to rescue victims from rubble with their bare hands.

Like grotesque scenes from a medieval battlefield, thousands of bloated bodies piled up high in the streets of Port-au-Prince. There are no basic state services to deal with the dead with any dignity, let alone rescue the living or see to the survivors.

Many Haitians are now in rudimentary outdoor ‘informal camps’, described as “insanitary” and “dangerous”. A lack of clean drinking water, food and sanitation means that infectious and deadly diseases can spread. Medical staff are overwhelmed. The injured, often with broken bones, are facing limb amputations or death due to a lack of basic medicines and treatment.

It is very different for the rich; their large homes in the “cool, green suburb” of Petionville were “mostly spared” and they have food “supplies to last” (Washington Post, 18/01/10). International rescue workers report being directed first to find foreign nationals in collapsed large luxury hotels. The Washington Post predicts that the rich in Petionville will “receive a large portion of the US and international aid and reconstruction money”.

Working people around the world are understandably horrified and appalled at this heartbreaking humanitarian tragedy. Many people instinctively and generously rushed to give donations to aid relief efforts. Compare this to the paltry funds promised by the UN and biggest world powers. The UN initially said it would raise $550 million in aid for Haiti – a mere fraction of the over $100 billion that is being paid out worldwide in bankers’ bonuses this year. No doubt in an act intended as ‘good PR’, the New York-based bank, Citigroup, said it will give $250,000 to the American Red Cross that can be used for immediate relief in Haiti. Yet Citigroup’s overall 2009 ‘bonus pool’, mainly for top managers, is expected to be about $5.3 billion.

At the same time, the slow response of the major powers, particularly from Haiti’s rich neighbour, the US, is causing growing frustration and anger around the world. Despite the rhetoric from Washington, little aid arrived for days after the earthquake, when most needed and when people trapped under collapsed buildings were still alive. Furious at the paltry aid provided, some Haitians resorted to protesting with road blocks made from dead bodies and construction debris. Many Port-au-Prince residents have given up all hope of overseas aid and are fleeing by foot to the countryside.

The US administration and the UN repeatedly claim that their abysmal response is due to the lack of infrastructure and coordination in Haiti. Even though this excuse for inaction is undoubtedly vastly exaggerated, Haiti certainly was already in a very poor state prior to the earthquake. It is the poorest country in the western hemisphere and has a history of destructive natural disasters. But whose fault is this? It is the baleful role of US imperialism, along with a series of corrupt, pro-US Haitian regimes, which has left the country so impoverished and vulnerable to natural disasters.

Although the earthquake measured 7.0 on the Richter scale, the scale of the human disaster was due to Haiti’s poverty. The country has just two fire stations and no ‘quake-proof’ housing. Similar earthquakes have much less impact on neighbouring Dominican Republic, where building regulations are much better enforced or in nearby Cuba, where emergency management is “infinitely” better.

In Haiti, some 80% live below the poverty line and the country’s GDP per capita in 2009 was just $2 a day. Joblessness sits at a staggering 75%. The survival rate of newborns is the lowest in the western hemisphere. “For many adults, the most promising sources of income are likely to be drug dealing, weapons trading, gang membership and kidnapping and extortion”, commented the Guardian (15/01/10).

Rather than rush in large scale emergency relief and aid to Haiti, the White House embarked on a large-scale armed intervention. The US refers to “widespread looting” to justify the need for thousands of US soldiers and marines. But with shops destroyed or shut, this is the only way for many to get water and food. To date, according to the Guardian (18/01/10), “warnings that Port-au-Prince would descend into anarchy have not materialised”.

The US “military’s takeover of emergency operations in Haiti” meant US military aircraft were given priority at Port-au-Prince’s airport, forcing many non-US, humanitarian flights to divert to the Dominican Republic. This provoked a furious response from other powers with an interest in the region, including Brazil and France. The French foreign minister accused the US of treating the airport as an “annexe of Washington”.

Fearing mass riots and protests as aid fails to reach survivors, the US is putting troops on the ground to maintain ‘law and order’. This could mark the start of what, in effect, will be US military rule, which will be used against the people of Haiti, just as the 9,000 strong UN forces were employed in Haiti before the devastating earthquake.

Given that the Obama administration and other powers failed for several crucial days to provide even the most basic aid needed by the Haitian masses, who can seriously believe they will provide the major resources needed to rebuild and modernise the country, including making its buildings ‘quake-proof’? The US, the UN and the foreign NGOs – already widely ridiculed by Haitians for creaming off 50% of their income on “overheads” – will only be further discredited in the eyes of the poor.

For decades, Haiti has been plagued by poverty, joblessness and military dictatorships (see below). Only the masses of Haiti, with the working class playing the leading role, can find a way out of the endless impoverishment, violence and coups.

Today, more than ever, a workers’ and poor people’s mass alternative has to be constructed in opposition to the tiny rich elite. The earthquake disaster and abject failure by big powers to provide aid and a proper ‘reconstruction programme’, will cruelly highlight to the Haitian masses the need for democratic control of the resources in society.

Workers and the poor in Haiti need their own independent class organisations, trade unions and a mass party with a socialist programme, to fight for real fundamental change, making an appeal to the working class and poor across the Caribbean and the whole Americas.

The current government of President RenÃ© PrÃ©val is widely seen as corrupt and feeble. But this descent into a “failed state” was not inevitable or somehow to do with the ‘national character’ of the Haitians, as some western politicians and sections of the mass media would have it.

In the 1780s, under French rule, Haiti exported 60% of all the coffee and 40% of all the sugar consumed in Europe. Just over 200 years ago, the black masses abolished slavery in Haiti and won national independence from France; deeds that inspired the masses of the Caribbean and the world.

But the world powers were vengefully determined that the ‘black republic’ would fail and embarked on a series of interventions and endless meddling. In 1825, Haiti was saddled with paying enormous ‘reparations’, which it was paying until 1947!

US marines occupied Haiti from 1915 to 1934. Between 1957 and 1986, the US backed the notorious regimes of ‘Papa Doc’ and ‘Baby Doc’ Duvalier, until the hereditary tyranny was overthrown by a mass movement of workers and students.

A series of highly unstable and short-lived regimes followed. Unfortunately, these years of radical urban movements did not have a revolutionary socialist leadership that could take power, sweep away capitalism and realise the demands of working people.

Last week, President Obama was joined by former US presidents Clinton and Bush, promising to meet Haiti’s “moment of need”. This was in fact a moment of nauseating hypocrisy, given the role Clinton and Bush played when in office in deepening Haiti’s poverty and corruption.

Jean Bertrand Aristide won Haiti’s 1990 presidential elections by promising to tackle poverty and social injustice. His initial reforms were popular with the poor, if timid by the standards of what is actually needed to end poverty and joblessness. Nonetheless, Aristide was viciously opposed by the reactionary rich elite.

Aristide was subsequently overthrown by General Cedras, in 1991, but returned to power, in 1994, on the back of 20,000 US troops after the Clinton administration eventually lost patience with the general’s volatile and defiant Haitian regime. Clinton ensured that Aristide would not threaten vital US interests or the continuation of the rule of the Haitian elite.

In 2000, Aristide was again elected president with over 90% support but his support lessened as he failed to make any real change to poverty conditions and as allegations of corruption and vote rigging increased.

The Bush administration nevertheless opposed Aristide and blocked international aid to Haiti. The reactionary opposition mounted an uprising in 2004, with the support of members of the Republican Party in the US, and Aristide was bundled out of Haiti by US troops.

The years since Aristide’s removal have seen continuing crisis and violence and a succession of prime ministers. In 2006, RenÃ© PrÃ©val was announced winner of the presidential vote. The increase of foreign troops, led by Brazil (playing a regional imperialist role), saw bitter clashes between UN troops and armed gangs in CitÃ© Soleil, one of the largest shanty towns. Food riots, in April 2008, forced the government to announce a plan to cut the price of rice.

Despite President PrÃ©val’s description as “a champion of the poor” he has not tackled the deep inequalities in Haiti. The huge social gap between the poor Creole-speaking black majority, that make up 95% of the population, and the French-speaking mulattos, 1% of whom own nearly half the country’s wealth, remains unaddressed.

Trade policies imposed by international financial agencies left Haiti dependent on food imports, particularly from the US. Soaring rice prices and other staples in 2009 hit the Haitian people very hard. Haiti is burdened with $50 million a year in debt servicing. Last week, a $100 million IMF “emergency loan” was granted but on condition of a public sector pay freeze.

Before the earthquake Bill Clinton, UN special envoy to Haiti, was promoting yet more sweatshops, from which US and Canadian corporations and Haiti’s elite would profit.