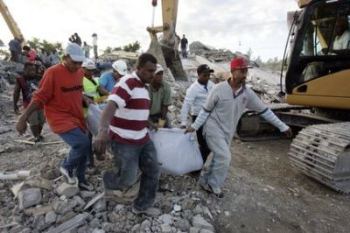 Fight for a socialist world

While desperate survivors in Haiti’s destroyed capital of Port-au-Prince tried to find food, water and shelter, US secretary of state Hillary Clinton breezed into the main airport for a photo opportunity, diverting aid relief flights which included a field hospital from the charity MÃ©decins Sans FrontiÄres.

The US government has brushed aside the Haitian government of RenÃ© PrÃ©val, taken over the main airport and sent in 10,000 troops. Aid has barely trickled out from the US/UN guarded stockpiles to the millions of Haitian refugees.

The United Nations – which has been occupying the island state for the last six years – seems instead to be concentrating its efforts on policing the wealthier and commercial areas of the capital.

UN secretary general Ban Ki-moon visited the devastated capital and in the face of hungry and thirsty people blithely told them to be “patient”. But patience has run out and people have desperately been sifting the ruins to find food and water. Yet much of the western media condemned their efforts as ‘criminal looting’.

Ordinary people worldwide have dug deep into their pockets to donate to the emergency. But despite pouring trillions of dollars into rescuing the capitalist world’s banks and financial institutions, western governments have only donated a few millions.

And why is it that this earthquake can claim 200,000 lives but a similar sized earthquake claimed only 63 people when it struck northern California in 1989? The answer is obvious. California is in a rich country but Haiti is the poorest country in the western world with three quarters of its population scraping by on only $2 a day.

And whereas in California sound construction materials, building methods and regulations have been brought about over decades through public pressure on the authorities, Haiti has been subject to the exploitative rule of a corrupt local elite, favoured by US and French imperialism, which has made massive profits and siphoned off investment and aid money.

And when poor Haitians voted in the radical president Jean-Bertrand Aristide to change the situation he was removed (for a second time) in a 2004 coup by the rich elite, supported by the Bush administration.

Under the domination of imperialism, few Haitian people will benefit from any reconstruction. But the alternative is not to despair. Haiti has a revolutionary heritage going back two centuries, when a slave revolt led by Toussaint L’Ouverture defeated the country’s French colonial rulers. Today it is that tradition that Haitians need to draw on to liberate themselves from poverty, destitution and exploitation.

In 2010, many trade unionists will take industrial action to defend their living standards. Also, working class people in a number of areas will have an opportunity to express their anger through the ballot box, in the areas where the newly formed Trade Unionist and Socialist Coalition stands a candidate in the general election. The coalition argues for taxing the rich and for the banks to be brought into “true public ownership and democratic control, instead of huge handouts to the very capitalists who caused the crisis”.