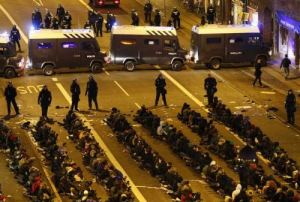 Strong mood against capitalism – and its police force

Almost 1,000 arrested, only three of them charged

The climate demonstration in Copenhagen on 12 December, with over 100,000 participants, was the biggest climate protest ever. It had a strong anti-capitalist character. “We chanted ‘Climate Justice’ and ‘Save the planet – smash the system – what we need is socialism’. People along the demo applauded us and we sold many papers and other material,” reported CWI members. 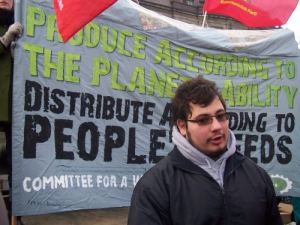 We thought the demonstration would be big. Many people we met the week before said that all their friends would be going. Over 100,000 took part, a breakthrough for the climate movement. Simultaneously, there were 3,000 demonstrations around the globe. While the so-called world leaders at the UN summit can only fail, this rank and file movement has huge potential to grow.

Demonstrators from Friends of the Earth, dressed in blue, conducted a “flood” with thousands of people. There was also a giant snowman from Greenpeace, lifebuoys from Oxfam, kangaroos, sumo wrestlers and polar bears. Parties with contingents included, apart from RS/CWI, the Danish Red-Green Alliance (Unity List), Socialist PeopleÂ´s Party and the French NPA, plus some communist parties. The demo was dominated by yellow and black placards from the organisers, saying “Save the planet not the profit”, “There is no Planet B”, “Blah Blah Blah â€“ Action Now” and “Nature doesn’t compromise”.

Our petition, saying that big business are the climate criminals, arguing for socialist democratic planning globally and for nationalisation of the top 500 multinationals, quickly filled with names. At the demo, we just said “sign against capitalism”. Even BBC world news reported the “disbelief” against capitalism in the massive demonstration on Saturday. That mood is strengthened by the fact that politicians at the UN summit are also responsible for cuts and unemployment.

One speaker at the demo was Ian Terry from the Vestas workers on the Isle of Wight in Britain where 400 green jobs have been cut. The notice of closure of this factory, producing wind power carbines, was met by an 18-day long workers’ occupation this summer. 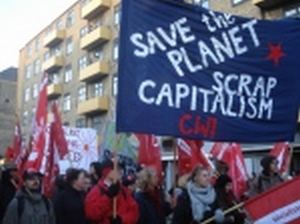 At the People’s Climate Summit, activists from around the world met. Author Naomi Klein said, in front of a television camera, that”capitalism can’t solve what capitalism has created”. She also criticised those who treat Obama with kid gloves on this issue.

While capitalism was criticised, however, few people put forward a real alternative to replace capitalism. The CWI did. One of our banners said”Socialist Planning Needed”. We stress that capitalism and its ‘market failures’ are products of an economic and political system that is run in the multinationals’ interests. Socialism would mean a new economic and social system, owned and run collectively by workers and the poor, with a new political democracy, checked and controlled from below. The interests of the climate, nature and all human beings would be to the forefront.

The police arrested close to 1,000 demonstrators. Peaceful demonstrators were handcuffed on their backs for six hours (read the witness reports below). Of those 1,000, only three have been charged with anything.

Karin Wallmark, one of 40 CWI members arrested at the demo, reports: “Everything in the demonstration changed when a crowd of policemen ran out of an alley and blocked the road in front of us. We stopped and stayed calm, wanting to avoid provoking them. We understood that the police as well as some media would see any further violence as a confirmation of the correctness of the massive police presence in Copenhagen and the new antidemocratic “hooligan laws” introduced before the summit. But our being completely peaceful and innocent did not stop the police from carrying out their attacks.”

RS and the CWI started an immediate defence campaign, including phone calls from Joe Higgins, Socialist Party (CWI Ireland) MEP to the Copenhagen police. Most CWI members were released around midnight, with their fighting spirit intact despite back pain, hunger and tiredness. We contacted the media and the demo organisers, checked with legal experts and organised a protest press conference.

We will now press charges against the police, alongside a political campaign on both the climate issue and the police attack. Those in power in governments and the state apparatus are siding with big business, supporting their right to continue destroying the planet at the expense of fundamental democratic rights.

CWI members in Copenhagen have sold over 700 copies of our climate resolution in Swedish and English and have a lot of interested people to follow up. The need for a socialist climate movement is urgent, underlined by the events in Copenhagen.

On Sunday, RÃ¤ttvisepartiet Socialisterna (CWI Sweden) organised a well-visited press conference about the Danish police’s assault on peaceful demonstrators. Arne Johansson of RS spoke alongside Tord BjÃ¶rk, from Friends of the Earth Sweden, and Johanna Paulsson leader of another Swedish environmental organisation. Both those organisations also had members arrested at the demo.

Tord BjÃ¶rk sharply criticised the Danish police and the new ‘hooligan law’. He also criticised the organisers for ignoring the risk of such a police attack.

“We will take the Danish police to justice. For no reason, they sabotaged the rights of 968 demonstrators to have their say in this issue, which is decisive for the future of the entire planet. We have seen an unacceptable use of an unacceptable law”, said Arne Johansson.

Newspapers from around the world were at the press conference, for example Al Ahram of Egypt, several German and Italian papers and Swedish TV channel four. Mattias Bernhardsson, RS councillor and one of the arrested, was interviewed on Swedish public service radio news.

Karin Wallmark, also an RS member, read the list of possible complaints the Danish police themselves had compiled in a brochure and concluded that they had broken their own rules on every single point.

Karin Wallmark: “We were blocked by the police for about an hour, chanting slogans such as ‘This is what democracy looks like’ and ‘Arrest the polluters, but let us go’. We also spoke on megaphone to the police, trying to make them think whether it was correct to block people from demonstrating to stop the climate crisis. We proposed they should go on strike!

“After about an hour, the police started to arrest us, one by one, and sat us in lines on the cold ground. We had our hands cuffed on our backs and our legs spread, sitting really tight. For four hours we could not lie down or sit properly. No police answered our questions why we were arrested. We were not allowed to move even slightly and not allowed to go to the toilet.

“I shouted for an hour that I needed to go to the toilet. Eventually I stood up, although I’d seen others being beaten by the police for standing up. They did not hit me, but forced me down on to the ground several times. It was only when the media came and I shouted that they let me go to the toilet. Others were not so lucky and wet themselves.

“Several got sick, got seizures or fainted. The worst was the humiliation and not knowing why we were arrested and what would happen with us. We got moral support from other demonstrators, standing behind the police lines, and from people living in houses nearby.

“After four hours, they started to take us away in buses, still handcuffed, for a couple of hours. Eventually, we were let go, just giving our ID facts. As far as I know, none of the 400 arrested with me have been charged with anything.

“The police aimed to block us from demonstrating. It’s a violation of our right to demonstrate as well as a physical and psychological violation.”

Amer Mohammed Ali: “None of us understood what triggered the police attack. But probably, the police had been waiting for a long time to grab part of the demo. It must have been planned in order to execute it in the way they did. A few people with special needs were let through, such as one visually impaired person and one mother with a pram.

“Our slogans reached out to demonstrators on the other side of the police wall, with us looking like prisoners of war in a movie. The ground was incredibly cold and the strangle wires used to hold our hands were hurting. Many shouted they had lost sensibility in their hands.

“In the bus, the police were very rude and on one occasion one policeman slapped one of the arrested. We were handcuffed for six hours and in total it took eight hours until it ended with us telling them our names.”