For mass struggle to overthrow the coup regime; for socialist policies to end the rule of the oligarchs and army! 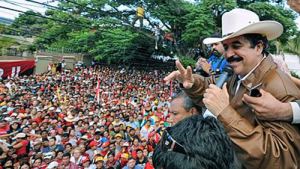 The elected president of Honduras, Mel Zelaya, who was deposed by a right wing coup and sent into exile on 28 June, unexpectedly returned to the country’s capital, Tegucigalpa, on the night of 21 September. As word of his return spread, large crowds of supporters, many of whom came from poor rural areas, surrounded the Brazilian embassy building where Zelaya addressed them. However, during the night of 23 September, the coup regime unleashed brutal violence, including rubber bullets and tear gas, against the remaining thousands of Zelaya supporters outside the embassy, causing scores of injuries and reportedly two deaths.

Since Zelaya’s return on Monday, the regime, headed by Roberto Micheletti, declared a state of emergency, suspending the right of assembly, and told all the foreign media to leave the area. The civilian airports are under military control and the borders are sealed. Most of the country has been shut down, with schools and many businesses closed. The army is reported to have cut off road traffic into Tegucigalpa and the electricity supply to ’36 Channel’ was cut off to prevent the TV station reporting on Zelaya’s return. It is reported that hundreds of Zelaya supporters were arrested and taken to the Chochi Sosa Stadium. However, in response to this brutal repression, reports have filtered past the regime’s media clampdown, telling of the masses reacting bravely, erecting barricades in Tegucigalpa’s working class areas and in other towns and cities.

This was Zelaya’s third attempt to return to Honduras since the June coup. Until recently, Zelaya was in Nicaragua. His ally, Venezuelan president, Hugo Chavez, said that Zelaya had traveled two days by land, crossing rivers and mountains, with supporters, eventually reaching Tegucigalpa. The Brazilian government gave Zelaya permission to seek asylum at their embassy.

Nicaragua has been in a state of ferment for months, following the June coup against Zelaya, with continuous mass protests, meetings and strikes by working people, students and the poor. The coup regime no doubt thought that their coup would end the ‘Leftist’ administration and intimidate the masses into accepting the ongoing rule of the big landlords and oligarchs. Instead, the ‘whip of counter revolution’ acted to spur on the poor and workers, who have had enough of huge social inequalities, unemployment and poverty.

Half of the population of Honduras lives below the poverty line and official unemployment stands at 28%. More than one million of the 7.8 million population were forced to emigrate to the US to try and find work. 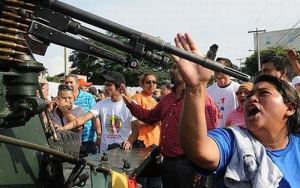 Zelaya moved to the Left

Zelaya, a wealthy landowner, was elected as President in 2005 representing the centre-right Liberal Party. Once in power, however, under pressure from the impoverished masses, he carried out some reforms to alleviate the suffering of the poor, including a 60% increase in the minimum wage. In 2008, Zelaya brought Honduras into the regional alliance promoted by Venezuela, the Bolivarian Alternative of the Americas (ALBA) and reached an agreement with Venezuela over fuel importation, breaking the monopoly of the multinationals.

Zelaya’s policies led to uproar from the Honduran ruling class, which has long been tied to US imperialist interests. In the 1980s, Honduras was used as the central launch-pad for the right wing terrorist and US-backed Contras, who fought to defeat the revolution in Nicaragua. Throughout the country’s history, the people of Honduras have suffered many military coups, as the rich elite do everything to stop any attempt to distribute wealth to the masses.

Zelaya’s attempts to try and change the constitution acted as the trigger for the June coup (the current constitution was drafted by a right wing military regime in the 1980s), along with his dismissal of the armed forces’ commander. Zelaya declared that a referendum would be held on the same day as the 29 November elections. The Supreme Court, the right wing dominated Congress, and the military, which is responsible for organising elections in Honduras, all opposed the referendum. When Zelaya refused to back down over the poll, these forces overthrew him.

The Honduran ruling class feared that even Zelaya’s limited reforms threatened their interests and that idea of a Constituent Assembly could arouse the masses to mobilise for fundamental social change.

The coup against Zelaya was formally condemned by most Latin American countries and the Obama administration made cautious criticisms, but carefully short of any condemnation that would mean imposing sanctions against the coup regime. Indeed, it is widely thought that at least sections of the US military/intelligence complex, linked to Hillary Clinton, the US Secretary of State, had foreknowledge of the Micheletti coup.

Since June, the poor and exploited of Honduras have courageously resisted the coup regime. The main leadership has come from the National Front of Resistance, which has organised regular mass actions and held assemblies of workers and the poor to chart a way forward. The Resistance movement called this week for a huge demonstration on 23 September to protest against the regime.

The situation in Honduras is reaching a critical point. The return of Zelaya has re-energised the masses. How will the coup regime react? While the Brazilian government has warned the coup regime against any attempt to storm its embassy, given its brutal pedigree, it is not ruled out that the regime could attempt to do just that, to arrest or even kill Zelaya. Coupled with a brutal nation-wide military clampdown, the regime would hope this could put an end to the masses’ revolt. Such a scenario would be resisted by the masses, however, and could lead to a mass insurrectionary movement. Even if a crushing of the masses revolt succeeded, it would not be a lasting ‘victory’ for the ruling elite, but would only prepare the way for further upsurges of mass struggle.

The Micheletti regime, however, fears the development of a radicalised mass opposition movement and is also coming under huge pressure from the US and other Latin American regimes to cut a deal with Zelaya. Until now, Micheletti put such demands on Zelaya’s return to Honduras as to make them completely unacceptable (i.e. that Zelaya cannot hold the presidency, that Zelaya must accept the 29 November elections being organised by the coup regime and that Zelaya must face trial). But Micheletti’s regime, or important elements within it, may be prepared to compromise with Zelaya, to try to stop the spread of radical opposition which could threaten the entire regime and the ruling class.

On 23 September, Micheletti indicated a change in tactics, by stating that he is prepared to talk to Zelaya but that Zelaya must first accept that planned presidential elections would be held in November.

Regarding his aims, Zelaya has made apparently contradictory statements since his dramatic return. He reportedly told the crowds outside the Brazilian embassy he would “topple the dictatorship” (Guardian, 23/09/09) and he rebuffed Micheletti’s latest offer, calling it “manipulation”. But Zelaya is also quoted as stating that he is ready to “initiate a great dialogue” (El Pais, 23/09/09).

The US has backed the ‘San Jose Accord’ proposed by former Costa Rican President Oscar Arias, which would see Zelaya returned to the presidential palace as a nominal head of a “unity and reconciliation” government that would involve the coup plotters. This ‘resolution’ would see the coup leaders absolved of any crimes and Zelaya would have to vow not to try to change the constitution. All in all, the Arias plan so fervently backed by Hillary Clinton, amounts to a victory for the coup plotters.

For the masses, there can be no question of negotiations or compromise with an illegal and brutal regime that denies democratic, civil and human rights and which will do everything to make sure the rule of big capital continues at the expense of working people and the poor.

The key task for working people, youth and the unemployed is to build and to develop the mass resistance and independent working class policies. The conditions of poverty and inequality will not be altered by ‘government of national unity’ type ‘deals’ with the Micheletti regime, sponsored by US imperialism and local regional capitalist powers, and possibly involving the Organisation of American States and the UN. There can be no ‘unity’ with the capitalist and landlord classes and imperialist interests, who are diametrically opposed to the class interests of the Honduran masses.

To overthrow the coup regime and to make meaningful reforms for working people and the poor requires spreading and developing the broad mass resistance set in motion since the June coup. The masses have shown courage and determination in the fight for their democratic rights, including the right to organise and for independent trade unions. To succeed in overthrowing the coup regime and to bring about real and lasting democratic rights and social gains entails using the methods of mass class struggle, with the organised working class to the fore: the general strike, mass demonstrations and, ultimately, an insurrectionary movement to get rid of the coup regime and imperialist interference. As part of this, the resistance movement must make a class appeal to the rank and file of the armed forces, who are drawn from the country’s poor: ‘Don’t fire against your brothers and sisters, your fathers and mothers: Join the struggle to overthrow the ruling oligarchy and the officer class!’ The movement must defend itself, including with arms and under democratic control, against the continuing deadly attacks of the state and right wing paramilitary forces.

The mass movement also needs to appeal to their brother and sister toilers in neighbouring Central America and throughout the Americas, including in the US, calling for class solidarity and actions by trade unions to help break the coup regime of Micheletti.

Local community based committees and other structures already set up by the Resistance Front need to be developed, on a local, regional and national level, and democratically-run. These mass representative structures, involving local communities, workers and trade unions, youth and students and the wider community, can become the real base of power in Honduras and form the basis of a new national government of workers and the poor: for a revolutionary Constituent Assembly with majority workers and poor representation!

A national workers’ government, armed with socialist policies, can fundamentally change the situation in Honduras, bringing the country’s wealth under the democratic control and management of the working class. This would be a powerful attraction to the masses of the Americas, hugely speeding up the process of radicalisation and revolution already in its early stages on the continent.