Celebrating Life and Struggles of Gani 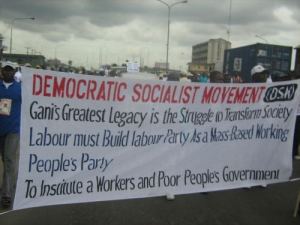 From his death to interment it was ten days that shook Nigeria. Gani Fawehinmi, the foremost tribune of Nigerian poor working people died on September 5 of lung cancer. Gani was neither a smoker nor drinker; he could have contracted the terminal disease from his incarceration and police teargas in the course of his numerous, well-documented struggles against successive anti-poor governments in the defence of democratic and socio-economic rights of the poor working masses. 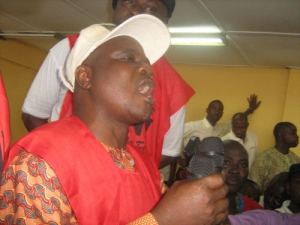 Until his interment on September 14 it was a beehive of activities across the country.

In Lagos and Ondo States, people sang Gani’s praises and relived the struggles he championed as they saw his lifeless body. Everywhere including where his body was not present the general atmosphere was that of the celebration of a life dedicated to the struggle for a social change in Nigeria. As a lawyer, Gani used law as an instrument of social justice; he defended the rights of all the strata of the oppressed, students, youths, workers, poor masses and people with disabilities. As a philanthropist, he instituted an annual scholarship for poor and indigent students as well as give financial and material help to the needy and less-privileged. As a political activist, in defiance of the then military dictatorship, he formed the National Conscience Party (NCP) as a tool for the abolition of poverty and on whose platform he contested for President to actualize its programme. He also used that party as the pivot to lead the struggle for opening up of party formation in the country. The majority of the parties in the country today owe their existence to the legal and political struggle he led and almost single-handedly financed. 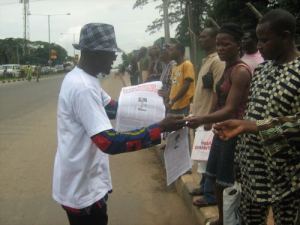 Ondo, the hometown of Gani where the final burial activities were held, played host to perhaps the biggest crowd in its history as people came from far and wide to celebrate the life and struggles of man who was a scourge on the tribe of thieves and beasts who have been holding the nation at jugular.

One of the highlights of the activities in Edo and Ondo states was seeing mainstream print media organisations like the weekly Tell magazine and the daily Nation newspaper practically hawking their special issues on Gani. At the VIP section of Akure Township Stadium, despite the fact that the cover price of the magazine is N300, fifteen times that of Socialist Democracy, the DSM paper, the Tell vendors to a large extent literally competed with us the attention of the prospective buyers. The magazine was produced with glossy paper and colour picture that made it highly attractive. This however shows how thirsty and enthusiastic people were to read about or identify with Gani.

When an elephant is dead different kinds of knives would appear, goes a Yoruba saying. This explains why even many organizations and individuals who do not share the socio-economic and political views with Gani either organized activities, visited his residence or wrote tributes in the best of superlatives in his honour. Even, the past and present political leaders including the military dictators like Ibrahim Babangida, Olusegun Obasanjo, etc whose anti-poor policies Gani fought until his last breath have not absented themselves from publicly extolling and identifying with his virtues. Some of them could have wished he never lived for always being a constant pain in their necks.

Even, the critically ailing National Conscience Party (NCP) suddenly rose from its sickbed and thrust itself out to share from the glowing limelight arising from Gani’s death. This could be a momentary relief as it appears the party is terminally ill. Yes, at least in name the party deserves to identify with Gani, its founder. The party defines political height of Gani and his most qualitative turn in political activism. Gani formed the party in defiance of the military dictatorship and used it as platform to lead both legal and political struggles for opening up of party formation in Nigeria. It is part of Gani’s rich history, but itself is now almost history as far as political relevance is concerned. The self-serving elements which have been in leadership since Gani stepped down as its Chairman have bastardized the objective of the party and rendered bleak its political prospect. At present it has as a National Chairman Femi Falana who apparently considers identifying openly with the party an anathema.

Gani himself knew the party, he sacrificed his time, energy and resources to build had veered off its ideological track, and expressed this publicly. At a political summit organized by DSM in conjunction with the United Action for Democracy on June 28 2006 Gani said, “I must confess, I don’t know the economic programme of NCP today”! But as vintage Gani, he did not despair on political alternative for the working people. In his words, “we need a socialist party with socialist economic programme. If you form this, I will join. We don’t need power at all cost. We need power under a platform with socialist programme to fight the Westâ€¦.. (This party can be formed and recognized by Nigeria constitution within two months). I am not happy by the way thing things are going”. The speech of Mohammed, Gani’s first son, at LASCO rally in his honour on September 11 further confirmed that he had signed off the NCP politically before his demise. Mohammed informed the audience that Gani told him about the potential of Labour Party as political alternative for the poor working masses. Yes it is correct that Labour Party has potential to wrest political power from the thieving ruling elite, but not in its present form. To realize its potentials it has to be built as a mass based fighting working class party.

In all the events the DSM participated in we held placards and banners which raise demands that link the struggles of Gani to the current struggles of workers, youths and the poor masses for immediate demands and a working people political alternative. These include implementation of the Teachers Salary Scale (TSS) for primary and secondary school teachers, implementation of the agreement reached with the striking education workers in the university, demand for a minimum living wage and better living conditions, reversal of government’s deregulation policy and rejection of fuel price increases, building of a Labour Party as mass-based fighting working class people party and the socialist transformation of the society.

Where we could also make speeches we ensured that the points were well struck. For instance at the Lagos LASCO rally, Segun Sango, DSM General Secretary described Gani as a multi-dimensional personality, “Gani’s trait, which must be properly understood, was his steadfast and thorough commitment to whatever he was doing, be it for family, members, friends and associates, legal and political struggles. For these two reasons, it should not be surprising that Gani was being eulogized by many and different elements in society â€¦ however, eulogies emanating from the prominent members of the capitalist elites irrespective of their political parties must be treated with special caution by working class elements” he said. To the rousing applause of the audience Sango used the occasion to drive home our demand on the leadership of the NLC which was ably represented with its President Abdul Wahid Omar in attendance to declare and mobilize for solidarity strike in support of the university education workers who have been on industrial actions for over 11 weeks. He concluded that the greatest tribute payable to Gani is for labour leaders to build a mass-based working people’s party through which the struggle for social transformation of the society that Gani stood and fought for can be achieved.

Very significantly, speaking immediately after Sango, the former NLC President Adams Oshiomhole also spoke in a manner that underlines the necessity of a working class party. This is despite the fact that Oshiomhole in 2007 ran on the platform of capitalist Action Congress (AC) to become the Governor of Edo state, a position that was argued against by people like Gani and members of DSM. Oshiomhole told the meeting that “if Gani were to be alive today I know what he would tell me, ‘Adams come back to your constituency’ “. This essentially underscores Gani’s commitment to the building of an independent party controlled and run by ordinary working class and youths to proffer political alternative to all the anti-poor, capitalist ruling parties including the AC. 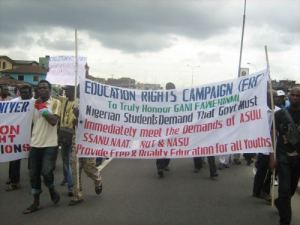 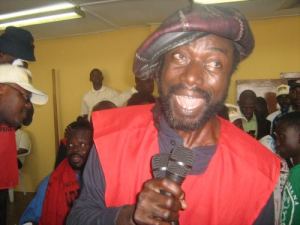 The members of the Democratic Socialist Movement intervened actively in a number of the activities organized in Gani’s honour. We were centrally involved in planning of the LASCO (Labour and Civil Society Coalition) programmes in Lagos and Edo States. We also intervened with sales of special edition of our paper Socialist Democracy on Gani in different areas. In many events large numbers of Socialist democracy were sold and this issue had to be reprinted four times to meet soaring demand. For example at an event organized by Lagos State government about 600 copies were sold, while in Akure where Ondo State government organized lying in state 575 copies were bought. At the Lagos LASCO rally/procession we sold 1,580 copies while in Ondo town where the curtain was drawn on the burial programme 556 copies were sold. This warm response showed again how working people and youth are desperately searching for an alternative to the chaos that is Nigeria today and Gani’s record will inspire others to follow in the path of struggle.